Jazlyn Read
B Phty
Third Year Medicine (Graduate)
Griffith University
Jazlyn completed a Bachelor of Physiotherapy at the University of Queensland prior to commencing a postgraduate medical degree. Outside medicine, she enjoys travelling and languages.

The following report documents the case of a 63 year old male with metastatic melanoma following a primary cutaneous lesion. Investigation into the molecular basis of melanoma has identified crucial regulators in melanoma cell proliferation and survival, leading to the inception of targeted treatment and a shift toward personalised cancer therapy. Recently, the human monoclonal antibody ipilimumab and the targeted BRAF inhibitor vemurafenib have demonstrated promising results in improving both progression-free and overall survival. 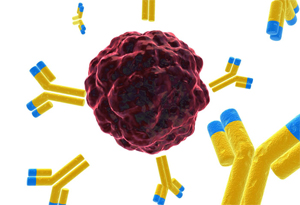 A diagnosis of metastatic melanoma confers a poor prognosis, with a median overall survival of six to ten months. [1-3] This aggressive disease process is of particular relevance in Australia, owing to a range of adverse risk factors including a predominantly fair-skinned Caucasian population and high levels of ultra-violet radiation. [4-6] While improved awareness and detection have helped to stabilise melanoma incidence rates, Australia and New Zealand continue to display the highest incidence of melanoma worldwide. [4-7] Clinical trials have led to two breakthroughs in the treatment of melanoma: ipilimumab, a fully human monoclonal antibody, and vemurafenib, a targeted inhibitor of BRAF V600E.

The patient, a 63 year old male, initially presented to his general practitioner ten years ago with an enlarging pigmented lesion in the centre of his back. Subsequent biopsy revealed a grade IV cutaneous melanoma with a Breslow thickness of 5mm. A wide local excision was performed, with primary closure of the wound site. Sentinel node biopsy was not carried out, and a follow-up scan six months later found no evidence of melanoma metastasis.

In mid-2010, the patient noticed a large swelling in his left axilla. A CT/ PET scan demonstrated increased fluorodeoxyglucose avidity in this area, and an axillary dissection was performed to remove a tennis ball- sized mass that was histopathologically identified wholly as melanoma. A four week course of radiotherapy was commenced, followed by six weeks of interferon therapy. However, treatment was discontinued when he developed acute abdominal pain caused by pancreatitis.

CT/PET scans were implemented every three months; in early 2011 pancreatic metastases were detected.

The tumour was tested for a mutation in BRAF, a protein in the mitogen activating protein kinase (MAPK) signaling pathway. BRAF mutations are found in approximately half of all cutaneous melanoma, and this is a target for a recently developed inhibitor, vemurafenib. [8-11] The patient’s test was negative, and he was commenced on a clinical trial of nanoparticle albumin bound (nab) paclitaxel. He completed a nine month course of nab-paclitaxel, and experienced many adverse side effects including extreme fatigue, nausea, and arthralgia. A CT/PET scan demonstrated almost complete remission of his pancreatic lesions. Despite this progress, three months after completing treatment, a follow-up CT/PET scan revealed liver metastases that were confirmed by biopsy.

In 2012 he was commenced on the novel immunotherapy agent ipilimumab, which involved a series of four infusions of 10mg/kg three weeks apart. One week after his second dose, he was admitted to hospital with a two day history of maintained high fevers reaching above 40oC, rigors, sweats, and diffuse abdominal pain. These symptoms were preceded by a week long mild coryzal illness. On investigation he had elevated liver enzymes, more than double the reference range, and his blood cultures were negative. His symptoms settled within eight days, and he was discharged after an admission of two weeks in total.

The patient remains hopeful about his future, and is optimistic about the ‘fighting chance’ that this novel therapy has presented.

The complexity of the melanoma pathogenome poses a major obstacle in developing efficacious treatments; however, the identification of novel signaling pathways and oncogenic mutations is challenging this paradigm. [12,13] The resultant development of targeted treatment strategies has clinical importance, with a number of new molecules targeting melanoma mutations and anomalies specifically. The promise of targeted treatments is evident for a number of other cancers, with agents such as trastuzumab in HER-2 positive breast cancer and imatinib in chronic myelogenous leukaemia now successfully employed as first-line options. [14,15]

Favourable outcomes in progression-free and median survival have been indicated for the taxane-based chemotherapy nab-paclitaxel that he next received; however, it has also been associated with concerning toxicity and side effect profiles. [19]

Ipilimumab is a promising development in immunotherapy for metastatic melanoma, with significant improvement in overall survival reported in two recent phase III randomised clinical trials. [20,21] This novel monoclonal antibody modulates the immune response by blocking cytotoxic T lymphocyte-associated antigen 4 (CTLA-4), which competitively binds with B7 on antigen presenting cells to prevent secondary signaling. When ipilimumab occupies CTLA-4, the immune response is upregulated and host versus tumour activity is improved. Native and tumour-specific immune response modification has led to a profile of adverse events associated with ipilimumab that is different from those seen with conventional chemotherapy. Immune- related dermatologic, gastrointestinal, and endocrine side effects have been observed, with the most common immune specific adverse events being diarrhoea, rash, and pruritis (see Table 1). [20,21] The resulting patterns of clinical response to ipilimumab also differ from conventional therapy. Clinical improvement and favourable outcomes may manifest as disease progression prior to response, durable stable disease, development of new lesions while the original tumours abate, or a reduction of baseline tumour burden without new lesions. [22]

Recently discovered clinical markers may offer predictive insight into ipilimumab benefit and toxicity, and are a key goal in the development of personalised medicine. Pharmacodynamic effects on gene expression have been demonstrated, with baseline and post-treatment alterations in CD4+ and CD8+ T cells implicated in both likelihood of relapse and occurrence of adverse events. [23] Novel biomarkers that may be associated with a positive clinical response include immune- related tumour biomarkers at baseline and a post-therapy increase in tumour-infiltrating lymphocytes. [24]

Overall survival was reported as 10 and 11.2 months for the two phase III studies compared with 6.4 and 9.1 months in the control arms. [20,21] Furthermore, recently published data on the durability of response to ipilimumab has indicated five year survival rates of 13%, 23%, and 25% for three separate earlier trials. [25]

Somatic genetic alterations in the MAPK signaling cascade have been identified as key oncogenic mutations in melanoma, and research into independent BRAF driver mutations has resulted in the development of highly selective molecules such as vemurafenib. Vemurafenib inhibits constitutive activation of mutated BRAF V600E, thereby preventing upregulated downstream effects that lead to melanoma proliferation and survival. [26,27] A multicentre phase II trial demonstrated a median overall survival of 15.9 months, and a subsequent phase III randomised clinical trial was ended prematurely after pre-specified statistical significance criteria was attained at interim analysis. [8,9] Crossover from the control arm to vemurafenib was recommended by an independent board for all surviving patients. [8] Conversely, in patients with mutated upstream RAS and wild-type BRAF mutation status, the use of vemurafenib is unadvisable on the basis of preclinical models. For these mutations, BRAF inhibition may lead to paradoxical gain-of-function mutations within the MAPK pathway, and drive tumourigenesis rather than promoting downregulation. [13] The complexity of BRAF signaling and reactivation of the MAPK pathway is highly relevant in the development of intrinsic and acquired drug resistance to vemurafenib. Although the presence of the V600E mutation generally predicts response, acquisition of secondary mutations has resulted in short-lived treatment duration. [28]

Ipilimumab and vemurafenib, when used individually, clearly demonstrate improvements in overall survival. Following the success of these two agents, a study examining combination therapy in patients testing positive to the BRAF V600E mutation is currently underway. [29]

With the availability of new treatments for melanoma, the associated health care economics of niche market therapies need to be acknowledged. It is likely that the cost of these drugs will be high, making it difficult to subsidise in countries such as Australia where public pharmaceutical subsidies exist. Decisions about public subsidy of drugs are often made on cost-benefit analyses, which may be inadequate in expressing the real life benefits of prolonging a patient’s lifespan in the face of a disease with a dismal prognosis. Non-subsidy may lead to the availability of these medicines to only those who can afford it, and it is concerning when treatment becomes a commodity stratified by individual wealth rather than need. This problem surrounding novel treatments is only expected to increase across many fields of medicine with the torrent of medical advances to come.

This case illustrates the shift in cancer therapy for melanoma towards a model of personalised medicine, where results of genomic investigations influence treatment choices by potentially targeting specific oncogenes driving the cancer.