This case report describes a previously healthy eleven-month old ex-preterm female with a severe presentation of acute viral bronchiolitis with an extensive family history of asthma. The link between viral bronchiolitis and asthma has always been controversial despite extensive research. Several studies have linked respiratory syncytial virus (RSV) bronchiolitis to the development of persistent wheezing or asthma later in childhood, even suggesting that a dose-response relationship may exist between the two entities. Some studies have also demonstrated that severe lower respiratory infections in the first year of life are important contributors to asthma, particular in those sensitized during infancy. On the other hand, it has also been studied as to whether an individual at risk of asthma has any impact on the severity of bronchiolitis. Despite numerous studies, results have largely been inconclusive, and the question of whether it is RSV that directly results in asthma, or if the susceptibility to RSV is conferred due to predisposing pulmonary pathology, still remains unknown.

Sally was an eleven-month old ex-preterm (35 weeks) female who presented to the Emergency Department (ED) with symptoms of fever, coryzal symptoms and a wheeze, subsequently diagnosed as viral bronchiolitis.

Sally had become acutely febrile two nights prior to presentation, developing coryzal symptoms the following morning. Sally was initially treated for an upper respiratory tract infection (URTI) and acute otitis media with amoxicillin by her general practitioner, but began to worsen over the subsequent 24 hours, with laborious and wheezy breathing, coupled with a persistent fever of 38.4oC. Despite two doses of salbutamol, her breathing continued to deteriorate, leading to her presentation at the ED. There were no apnoeic or cyanotic episodes, rigors or any associated inspiratory stridor. During this period, Sally was anorexic, with subsequently fewer nappy changes, and was reported by her parents to be far less active than usual. She was previously well, with no known sick contacts, and her vaccinations were up-to-date. 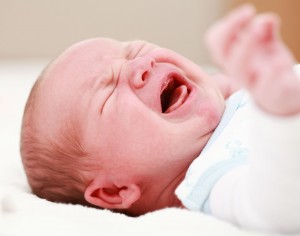 Sally had a similar episode of bronchiolitis in at eight months of age but was treated then as an outpatient. There was an extensive family history of asthma (Figure 1), and both the patient’s siblings had bronchiolitis as infants. At eleven months, Sally was meeting all the developmental parameters for her age. There were no known drug allergies and other than salbutamol PRN, the patient was not on any other medication. There was no remarkable social history.

Sally appeared lethargic and was in respiratory distress, with tachypnoea, an audible wheeze and classical signs of increased breathing effort (nasal flaring, tracheal tug and subcostal recession). She had a respiratory rate of 78 and was saturating at 100% on 8L supplementary oxygen, which decreased to 90% on room air, and was febrile at 38.5oC. She was tachycardic at a heart rate of 170. There were no clinical signs of dehydration. On auscultation, air entry was reduced bilaterally, with an expiratory wheeze and diffuse crackles present. There was no evidence of stridor, increased vocal resonance, or dullness to percussion. An ear, nose and throat examination revealed an erythematous pharynx but was otherwise unremarkable. All other examination findings were unremarkable.

The presenting symptoms suggested a diagnosis of acute viral bronchiolitis. However, with the extensive family history of asthma, Sally’s presentation could be her first virus- triggered asthma attack. While the clinical presentation suggested otherwise, there were concerns over the possibility of pneumonia, which had to be ruled out in the workup. In consideration of the severity of her initial presentation and the likely further deterioration until its peak at day 2-3, basic investigations were ordered. These included a full blood count, urea, electrolytes and creatinine parameters, a chest X-ray and a nasopharyngeal aspirate. There were no abnormal findings.

Sally was commenced on immediate supportive therapy. An IV line was inserted and she was commenced on 75% maintenance fluids as per guidelines to avoid Syndrome of Inappropriate Antidiuretic Syndrome. [1] She was also commenced initially on 2L oxygen as per guidelines for respiratory distress, [2] but failed to saturate appropriately until given 8L of humidified oxygen via nasal prongs, where she maintained 100% O2 saturation. While the efficacy of short-acting beta agonists (SABAs) in the acute management of bronchiolitis has been inconclusive despite extensive research, current guidelines recommended a trial of bronchodilators in infants >6 months. [3] Sally was administered six puffs of Salbutamol MDI (100mcg/ puff) via spacer [1] but with no results, hence the regime was discontinued.

The Royal Children’s Hospital (RCH) provides further guidance regarding management based on clinical signs and symptoms. Admission to the intensive care unit (ICU) was indicated for Sally to allow continuous cardiorespiratory monitoring and supportive management. Observations were performed hourly and with only supportive management, her oxygen requirements were weaned down to 2L over 24 hours.

Bronchiolitis during infancy and asthma in childhood – is there a causal link? Should infants at high risk of asthma receive Palivizumab immunization?

Several studies have linked respiratory syncytial virus (RSV) bronchiolitis to the development of persistent wheezing or asthma later in childhood. In a long-term prospective cohort study, there was a relative risk of 2.8 of developing wheezing at 5.5 years in children who had had bronchiolitis. [4] Sigurs et al. (2005) also reported a ten-fold excess of asthma in a similar study. [5]

RSV bronchiolitis as a direct cause of asthma

In an extensive seven-year REBEL prospective cohort study, Bacharier et al. (2012) reported that increased Chemokine (C-C motif) Ligand 5 (CCL5) expression in nasal epithelial cells during RSV infection carried an OR of 3.8 (95% CI, 1.2-2.4) for developing asthma. [9] This is in concordance with studies demonstrating increased CCL5 levels in subjects with asthma, [10] as well as in vitro studies demonstrating increased expression and transcription by RSV. [11] Unfortunately, the study failed to measure CCL5 levels prior to infection and thus the causal relationship has not been established. Hence, whether it was RSV that directly resulted in asthma, or if the susceptibility to RSV was conferred due to predisposing pulmonary pathology, [12] still remains unknown.

A five-year cohort study on children at high risk of atopy by Kusel et al. (2007) demonstrated that severe lower respiratory infections in the first year of life are important contributors to asthma, particular in those sensitized during infancy. [13] These findings suggest that protecting high-risk individuals from infection during infancy may be considered for long-term asthma prevention.

It has also been studied whether an individual at risk of asthma has any impact on the severity of bronchiolitis. This was particularly relevant in the Sally’s case, with her significant family history of asthma. Results in this field have been conflicting, with most studies not eliciting any significant association. However, Gurwitz et al. (1981) demonstrated that hospitalized cases were associated with a higher incidence of first-degree relatives with bronchial hyper-responsiveness. [14] A study by Trefny et al. (2000) also demonstrated similar results. [15]

Passive immunization with Palivizumab is currently recommended only for high-risk infants to prevent serious complications arising from RSV infections. [16] However, a recent double-blinded RCT in the Netherlands has begun examining its preventive effect on recurrent wheeze in healthy preterm children 33-35 weeks gestational age (MAKI trial), based on a non-randomized trial suggesting a prevention of wheeze in 50% of preterm children. [17] Such a study would complement this case study’s patient profile, and would be especially relevant in the context of her rich family history of asthma which puts her at high risk, and the abovementioned association but inconclusive causation between bronchiolitis and asthma.

From an economic standpoint, studies assessed the cost-effectiveness of Palivizumab, albeit in the context of high-risk premature infants (32-35 weeks). Unfortunately, the predisposition of these infants to a higher disease burden and costlier hospitalizations constitutes a higher cost per QALY [18]      compared to this case study’s patient, but even then there is still considerable controversy over its cost-effectiveness, especially across various healthcare systems.

In summary, this was a case of severe viral bronchiolitis warranting ICU admission for supportive management, on a background of an extensive family history of asthma. While studies have shown a clear association of bronchiolitis with asthma, causation has not been conclusively established, with family history of atopy possibly interacting in the development of asthma. Current research is lacking in the area of Palivizumab prophylaxis in the interest of asthma prevention in healthy children, but the evidence would suggest that it is likely to be cost-ineffective.