The only medical science textbook you need to buy?

Toby has a background in molecular biology and has worked on cancer epigenetics and microRNAs. His current interests are rural health and emergency medicine. Toby is the treasurer of Sydney University Medical Society and loves the sporting, social and academic medical life at Sydney. 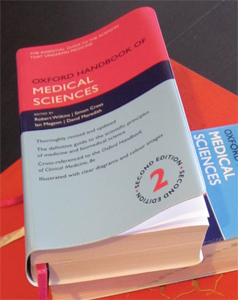 A complete guide to the medical sciences that fits in your pocket? Including anatomy? It sounds like something you’d find on the bookshop shelf between Refl exology at Your Fingertips and Sex Explained. But The Oxford Handbook of Medical Sciences (OHMS) is probably one of the few serious books that handles this enormous topic and can still be picked up with one hand. The first edition was published in 2006, and it’s been a fairly constant companion since I started graduate medicine at Sydney University. The dense but well written text often feels more conducive to medical school than authoritative textbooks – if you’re asked to explain a concept in a tutorial, the 30 second answer is better than the five minute dissertation. Compiling principles and systems also means you can flip from say anatomy to immunology without piling up your desk with resources. Unfortunately, the more I’ve used the first edition the more niggling errors I’ve come across. Granted most are just typos, but others were more frustrating. Including a colour DNA sequencing output that seems more CSI-prop than medical text, at least to someone with a molecular biology background. And errors like labelling the muscles of mastication as supplied by cranial nerve VIII are inexcusable (instead of V3 mandibular – so presumably type-setting error). So OHMS1e – a great book in serious need of a revision, but could the second edition be the last medical science book you ever buy?

The OHMS second edition was published September 2011 from $35 in online bookshops. On first impression it has not transformed into a full colour extravaganza like the latest Oxford Handbooks of Clinical Medicine/Specialties. It is 40 pages longer than the original, 962 in total, and still small enough for a big pocket. Much of the first edition worked well and it is good to see that the layout remains the same, with each topic generally covered in two pages or less, with plenty of room for annotation. The first three chapters cover the essentials: cells, molecules and biochemistry – with some good looking new figures. The ten systems-based chapters are now followed by a chapter on medicine and society. The final chapter – techniques of medical sciences – has had a timely rewrite, it won’t make you a lab scientist but at least you’ll be able to have an intelligent conversation with someone who is. The best addition, in my opinion, are the blue boxes succinctly summarising relevant treatments and drug therapies in all the sections.

The cross-referencing to the most recent clinical Oxford Handbooks is a welcome update (in spite of a couple that refer to OHCM8p.000). I would have liked to see a more thorough reworking of the anatomy section; the diagram of the muscles of the hand remains duplicated a few pages apart. The molecular biology chapter, the one I feel semi-qualified to comment on, is my major complaint. There is no mention of new sequencing technologies and of non-coding RNAs that we are frequently told are the future of the field. Instead Maxam-Gilbert sequencing, a technique probably last done in the 1980s is still covered. Furthermore, ‘junk DNA’, a term surely killed off by the ENCODE project, makes a vampirelike appearance here. [1]

In summary, if you’ve already built a reasonable understanding of the medical sciences and are looking for a one-stop book for reference or revision on the run then this book is a good option. For its convenience and conciseness it is hard to beat OHMS2e. The USMLE crammers like First Aid, offer analogous coverage at an equivalent price but carrying one in your pocket isn’t an option. But beware – as far as OHCM2e is concerned the muscles of mastication are still innervated by CNVIII. Now where is my anatomy book?