Tiffany Foo
Fourth Year Medicine (Undergraduate)
University of Tasmania
Amanda Lim
Fourth Year Medicine (Undergraduate)
University of Tasmania
Born and raised in Malaysia, Tiffany has an immense interest in medicine in developing countries and rural areas. Her interests include reading, writing, baking and travelling. She has special interests in infectious diseases, rheumatology and emergency medicine but is keeping her options open. She wants to make a difference in the lives of the people around her.

Amanda loves to spend time with children and volunteers with Variety Tasmania. She is passionate about charity work and aspires to volunteer with Médecins Sans Frontières one day. She also enjoys travelling and badminton outside of medicine. She is active in promoting Malaysian students’ welfare in Australia and is proud of her Malaysian heritage. 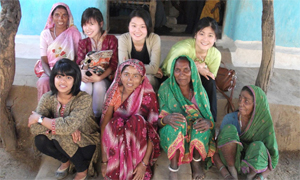 During the summer break of our third year of medicine at the University of Tasmania, we decided to embark on an elective at Padhar in India. The country of India fascinated us as an opportunity to experience a very different health care system and to learn more about the Indian culture.

Padhar is a small town located in Madhya Pradesh in the central highlands of India. It appealed to us because of its rural location. This tiny town boasts a 200 bed multispecialty missionary hospital, which initially started out in 1958 as a clinic. The hospital is often the first point of contact for many patients from surrounding states, including the Gond and the Korku tribals, and some patients travel for days to seek medical help here.

After fifteen hours of flying and an eventful 26 hour train ride, we arrived at Itarsi Junction, a two hour bumpy drive away from Padhar.

Padhar is declared endemic for malaria so we came ‘armed’ with insect repellents and mosquito coils. Despite our best efforts, we were not spared the wrath of the mosquitoes. We couldn’t help but feel paranoid when we got our first mosquito bites even though we took our doxycycline regularly.

Tuberculosis (TB) is a serious and common health problem in Padhar. We had not expected such a high prevalence to the extent that, for doctors in Padhar, the first differential diagnosis for a cough and a cold was often TB until proven otherwise. It was not uncommon to see the sorts of chest X-rays with cavitating lesions that we had previously only seen in textbooks.

Another difference we observed during our elective was the vastly differing attitudes to hygiene. In Australia we are well familiarised with the hand hygiene posters plastered all over hospital walls. In Padhar, in place of our ‘5 moments of hand hygiene’ signs are signs that read, ‘Gloves are useful but not necessary.’ The sanitation practices were also very rudimentary as basins of water and lemon replaced the sinks and chlorhexidine we had previously taken for granted.

Textbook photographs of patients with late presentations of cancer came to life in Padhar. Geographical barriers, as well as the habit of betel nut and tobacco chewing, often result in patients presenting with large tumours of the oral cavity. One of the cases we saw was that of a 45 year old man who presented for a surgical resection of a large squamous cell carcinoma on the left side of his tongue. The skilled surgeons at Padhar performed a COMMANDO Procedure (COMbined MANDibulectomy and Neck Dissection Operation). The surgeons are particularly skilled at this procedure as it is commonly performed. This is because late presentations of cancer are common here due to the lack of preventative screening, as well as geographical barriers and poverty. It saddened us to see that there is a huge health disparity between a developed and developing country.

However, despite disparities in health care systems, we found that generosity knew no boundaries. There were many charming patients and helpful medical staff whom we encountered during our time in Padhar. In particular, we met a pair of omphalophagus conjoined twins, who were four months old at the time of our visit. Their parents were poor farmers who were devastated when their twins were born, as they did not have the means to care for them. Therefore, they did what they thought was best for the twins, by returning home without them and leaving them in the hospital. Won over by the twins’ infectious smiles, the hospital staff decided to take them into their care. The current plan is to wait for the twins to reach ten kilograms before separating them. However, the amount needed to separate the twins is more than US$150,000, much more than the hospital can afford. In addition, the hospital would need to cover the cost of raising the twins. However, they are determined to raise the twins and provide them with the best life that they can have. The twins were constantly surrounded by nurses, doctors and other hospital staff. The care and love shown by the team in Padhar certainly tugged at our heartstrings.

We also saw other cases that taught us some fundamental rules about diagnosis and history taking. One was a sixteen year old girl who presented to the emergency department complaining of a five day history of progressively worsening generalised abdominal pain.. She had a background of trauma after a fall whilst collecting water from a well. Although injury to the jejunum is common after blunt force trauma, [1] the medical team had ruled it out as it would be expected to cause very significant pain, usually leading to immediate hospital presentation. Thus it came as a surprise when a perforated jejunum was found on X-Ray. This case reminded us that clinical presentations, though incredibly useful, can still be deceiving.

One of the highlights of the trip was being a part of the team involved in the Mobile Clinic under the Rural Outreach Program, which was an initiative of Padhar Hospital. The Mobile Clinic services the surrounding villages that have limited access to healthcare due to geographical barriers. More often than not, it would have been months or even years since the villagers engaged with the healthcare system.

The makeshift clinic attracted many people from the village and surrounding villages as people of all ages with a myriad of diseases lined up patiently to seek medical help. The most common presentation was scabies and we quickly ran out of Permethrin cream. As Padhar Hospital has always been passionate about contributing towards the fight against human immunodeficiency virus (HIV) we also took bloods from patients to test for HIV and educated them about the disease and the importance of safe sexual practices.

On the last few days of our trip, we were very lucky to be a part of Padhar’s celebration of World Aids Day. The prevalence of HIV/AIDS in India in 2009 was 2.4 million out of a population of 1.2 billion. [2] It was the aim of Padhar Hospital to raise awareness of HIV and AIDS in conjunction with this day. In the morning church service conducted in the hospital compound, testimonials were shared from HIV patients as well as doctors who had clinical contact with them. During the lunch break, the hospital invited school children from nearby primary schools as part of the awareness program. One of the interesting things they had in store for them was a parody of the stereotypes against HIV patients. It is good to see that, unlike for many in the older generations, these young minds were receptive to the idea that HIV is not a deadly infectious disease that spreads through touch. The children were educated about safe sex practices as well as informed about the availability of free needles.

Whilst seeing plenty of patients and medical staff gave us opportunities and insights into medicine, our elective was also a culturally enriching experience. Generally, people were curious about our backgrounds and it was good to be able to share our culture with them and learn about theirs too. It gave us a glimpse into a very different way of life to our own. We experienced firsthand the gracious hospitality of the locals; we were invited to be a part of one of the doctors’ daughter’s wedding, despite the fact that we have never met the bride before.

We also loved seeing the sights and sounds of the town and outskirts, from people bathing and doing their laundry in rivers to women in bright coloured sarees carrying urns twice the size of their heads. We also saw families of five piled onto motorcycles. We were touched by the hospitality that was shown by the villagers, despite the fact that we were foreigners who did not speak their language. Many villagers opened their homes to us and we had a chance to see how they live their life, which contrasted immensely to what we were used to. They cooked with firewood and had to walk a fair distance to collect water from wells. What touched our hearts was the fact that everyone seemed satisfied with what they had. Their voices and faces seemed to echo the old adage, “Happiness is not having what you want, but appreciating what you have.”

It was a humbling experience, and reminded us to be grateful for everything around us. It is sad to think that in this day and age, there are many people who are still living in poverty and unable to access healthcare. Hospitals like Padhar Hospital have certainly made a difference in terms of rural healthcare provision. When it was time for us to go, we left with a heavy heart but knowing that we will always do our best to uphold the hospital’s motto, ‘Burdens lifted, hopes restored.’

Sharene Chong and Niyanta D’souza for making the trip memorable. Dr Choudrie and the amazing team in Padhar for their hospitality. Pictures taken by Tiffany Foo.