Introduction: Cardiac metastases are rarely diagnosed in patients with cancer despite being a common finding at autopsy. We report on a case of pericardial metastases in a patient with non small cell lung cancer (NSCLC) in the setting of coexisting direct tumour invasion into the superior vena cava (SVC) and right atrium. Case: We present a case of a 61-year old gentleman with metastatic adenocarcinoma of the lung. He presented with 2 – 3 days of progressive dyspnoea associated with pre-syncope. His physical examination was significant for bilateral elevated jugular venous pressure (JVP), bilateral arm oedema and hypotension. These clinical signs were explained by solid pericardial metastases causing constrictive pericarditis in the absence of significant pericardial effusion, and direct invasion of tumour into the SVC and right atrium producing SVC obstruction. His admission was complicated by an episode of supraventricular tachycardia (SVT), presumably caused by compromise of the electrical conduction system within the right atrium. Discussion: Cardiac metastasis is a common occurrence in advanced neoplastic disease, but is often clinically silent. The mechanism of cardiac metastases is believed to be primarily through lymphatic channels and metastasis is most commonly located in the pericardium. Symptoms of cardiac metastasis can be understood with respect to their anatomical position and are best diagnosed using transoesophageal echocardiogram (TOE). The most concerning complication of metastasis to the heart is pericardial effusion leading to life-threatening cardiac tamponade. This is an oncological emergency and is treated with pericardiocentesis and follow up preventative measures. Ultimately, cardiac metastasis signals advanced disease and poor prognosis.

Cardiac metastases occur in 20-30% of patients with non small cell lung cancer (NSCLC) [1] but are clinically silent in the majority of cases. [2] We report on a case of constrictive pericarditis caused by solid pericardial metastases concurrent with direct invasion of tumour into the superior vena cava (SVC) and right atrium. The clinical picture was complicated by SVC obstruction and right atrial compromise causing supraventricular tachycardia (SVT). 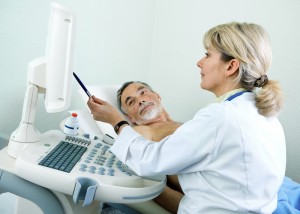 The patient was a 61-year old store worker with a previous 60 pack-year smoking history.  He was admitted with progressive dyspnoea over 2-3 days, associated with pre-syncope, on a background of metastatic NSCLC (T4N0M1b).

The patient initially presented with a six month history of pain when abducting his right arm, which was associated with dyspnoea and a productive cough. A chest computed tomography (CT) identified a large right hilar lesion causing right middle lobe bronchus occlusion and collapse of the right lung. The tumour had invaded the mediastinum, and was attenuating the SVC and compromising the right atrium. Metastases to the liver, the right sternoclavicular joint and the 4th, 9th and 10th ribs were also identified.

Pathology from the bronchoscopy biopsy demonstrated that the tumour was p63 negative and Thyroid Transcription Factor 1 (TTF-1) positive via immunohistochemical staining, consistent with adenocarcinoma of the lung. Epidermal Growth Factor Receptor (EGFR) screening was negative, hence the tumour was not sensitive to treatment to EGFR tyrosine kinase inhibitors. His management plan, following multidisciplinary team discussion, was radiotherapy to his chest and clavicle for pain management, and palliative chemotherapy (carboplatin/paclitaxel).

Three months post initial diagnosis, restaging CT of the chest, abdomen, pelvis and lumbar spine was organised after completion of radiotherapy and two cycles of chemotherapy. CT scans of the chest, abdomen and pelvis showed disease progression with new right adrenal metastases and new pericardial metastases (Figures 1 and 2). CT of his lumbar spine revealed disease in L1-2 and S1. In light of his latest CT results, radiotherapy to the lumbar spine and pericardium was planned.

At time of admission the patient’s medications included oxycodone/naloxone, omeprazole and dexamethasone. He was allergic to penicillin.

The patient was admitted after worsening dyspnoea was noticed during radiotherapy to his lumbar spine. Initial physical examination revealed mild bilateral pitting oedema at the ankle and no other signs. His initial investigations included full blood examination (FBE), urea, electrolytes and creatinine (UEC), liver function tests (LFTs), and calcium, magnesium and phosphate (CMP). All were normal except for a decrease in haemoglobin (Hb: 83). A provisional diagnosis of anaemia secondary to chemotherapy or neoplastic disease was made based on his haemoglobin, and he was given two units of packed red blood cells.

The following morning, the patient’s dyspnoea had not improved with transfusion.  On examination, his jugular venous pressure (JVP) was elevated bilaterally at four centimetres, his arms were swollen bilaterally and his blood pressure (BP) was 95/55. He was not tachycardic. An urgent electrocardiogram (ECG) and transthoracic echocardiogram (TOE) was performed to exclude cardiac tamponade. ECG was normal and a pericardial effusion, though noted on TOE, was trivial and deemed insufficient to cause cardiac tamponade. However, the echocardiogram demonstrated pericardial metastases overlying the left and right ventricular apex as well as the lateral left ventricular wall and inferior right ventricular wall. Significant echocardiography findings consistent with constrictive pericarditis included abnormal septal motion with marked septal bounce, annulus reversus on tissue Doppler, and left diastolic dysfunction with shortened deceleration time.

On day three of his admission, the patient had an episode of supraventricular tachycardia. His tachycardia was asymptomatic and he was treated conservatively with fluid hydration. Fluid resuscitation was unsuccessful and he remained tachycardic and hypotensive. Amiodarone 200mg was delivered and his heart rate and BP normalised gradually over eight hours. Electrolyte replacement was also initiated after UEC and CMP results revealed mildly decreased potassium and magnesium.

The patient remained as an inpatient for a further two weeks, amiodarone was gradually reduced from 200mg three times daily to 200mg daily and he had no further episodes of SVT. He completed radiotherapy to his lumbar spine and pericardium. Chemotherapy was ceased due to disease progression and functional decline.

Before discharge, the patient enquired about his prognosis which was carefully explained to him and communicated to his family. He was discharged to a palliative care unit, where he died six days later.

In theory, any primary malignancy has the potential to spread to the heart. The rates of metastasis in different tumour types were reported by Bussani et al. in 2007 [4] in a review of post-mortem studies performed at the University of Trieste, Italy, where over 80% of in-hospital deaths are examined by autopsy. They reviewed data from 1994 to 2003 and their reported rates of cardiac metastasis in different tumour types is summarised in the table below (Table 1). Currently, the only tumours which have not been demonstrated to metastasise to the heart are central nervous system tumours. [5]

The most common site of cardiac metastases is the pericardium, followed by the myocardium and endocardium. [4-7] With a preference for lymphatic spread, lung and breast carcinomas commonly spread to the pericardium, whereas lymphomas, leukaemias, sarcomas and malignant melanomas spread haematogenously and seed in the myocardium. [5] Only in isolated cases has there been tumour spread to the valves. [4,7]

Clinical evidence of cardiac metastases is variable ante-mortem. However, common presenting symptoms of cardiac involvement include dyspnoea, cough, palpitations, syncope and chest pain. [2] Presentations of cardiac metastases may be obscured by symptoms of advancing primary malignancy, but they can also present as life-threatening emergencies, such as cardiac tamponade, myocardial rupture, ventricular arrhythmia and, rarely, acute myocardial infarction. [2] In some cases, the rise of symptoms from cardiac involvement may be the only indication of an underlying malignancy. [8,9]

Presentations of cardiac metastases can be explained by the anatomical position of the metastases. Pericardial lesions cause pericarditis, which lead to serosanguineous or haemorrhagic pericardial effusions and, in most cases, cardiac tamponade. [5] Replacement of the myocardium and endocardium with tumour can cause systolic or diastolic heart failure, particularly if the ventricles are involved. [4] Myocardial infarctions occur when a neoplasm-induced embolus occludes the coronary circulation, or when coronary arteries are directly compressed or invaded by tumour or pericardial effusion. [4] Arrhythmias are common in the setting of any neoplastic involvement of the heart. [10]

The investigation of choice in detecting cardiac metastases is transoesophageal echocardiography. [5] Pericardial involvement is strongly indicated by a thickened pericardium, or in some cases, as a cauliflower-like projection into the pericardial fluid space. [11] Pericardial effusions can be detected with high sensitivity, and pericardiocentesis can be immediately performed under ultrasound guidance, quickly verifying the diagnosis of metastatic disease. Other imaging modalities such as MRI and CT can determine the size and extension of the tumour more precisely, and provide information on the characteristics of the lesion. [5,12] As such, myocardial metastases are better demarcated by CT and MRI over ultrasonography.

ECG findings in cardiac metastases are non-specific, although more than two thirds of patients with cardiac metastases show some degree of abnormality. [2] Similarly, chest radiography has limited use, but may reveal an increased cardiac silhouette from pericardial effusion or pericardial tumour. Chest radiography may demonstrate a primary lung tumour or pleural effusion resulting from heart failure. [5] There have been rare cases of osteogenic sarcoma metastases to the heart which contained bone and were visualised on the chest radiography.  [13]

Biopsy of cardiac metastases is rarely indicated, as less invasive imaging techniques are usually adequate to suggest tumour type and determine if surgery is feasible. However, biopsies of the heart can be done using fluoroscopy- or ultrasound-guided techniques, or through open surgery. [5] Coronary angiogram studies have value in surgical planning. However, the above techniques are rarely utilised in secondary cardiac tumours, and are more significant in the evaluation of likely primary tumours. [5,14]

Surgical treatment of cardiac tumours is uncommon and reserved for those with good long-term prognosis. Radiotherapy is commonly used to relieve local symptoms, provide local control and obtain haemodynamic stability. [2] Chemotherapy is also employed if the tumour is chemo-sensitive, as in the case of lymphomas, leukaemias and germ cell tumours. The life expectancy of pericardial metastases without treatment is reported to be 1.75 weeks. [15] With treatment, namely radiotherapy and periocentesis when necessary, life expectancy was extended to 22.5 weeks. [15]

Immediate treatment is required in patients presenting with pericardial effusions leading to life-threatening cardiac tamponade. Drainage of the pericardial fluid by pericardiocentesis is required, but effusions return in up to 60% of cases. [16] Thus, treatment of the initial effusion is combined with prevention of recurrence, which can be achieved with prolonged catheter drainage, obliteration of the pericardial space or creation of a permanent pericardial window which drains into the pleural or peritoneal cavity. The utilisation of sclerosing agents and instillation of chemotherapeutic agents in the pericardium have also been shown to prevent effusions. [2]

This case demonstrates salient features of cardiac involvement in metastatic lung cancer, including primary invasion into the SVC and right atrium as well as metastatic involvement of the pericardium. While most cardiac metastases are silent, or obscured by advanced disease, this case has highlighted clinical complications of cardiac involvement, including SVC obstruction, SVT and constrictive pericarditis.  Suspicion of cardiac metastases should always be high in oncology, as it allows prompt treatment and optimal comfort of the patient.

The authors would like to thank Dr. Vishal Boolell and Dr. Peter Briggs for their advice and supervision.

[10] Nakamura A, Suchi T, Mizuno Y. The effect of malignant neoplasms on the heart: a study on the electrographic abnormalities and the anatomical findings in cases with and without cardiac involvement. Jpn Circ J. 1975;39(5):531-42.