Bispectral analysis for intra-operative monitoring of the neurologically impaired: a literature review

Introduction: The bispectral index (BIS) is a technology which uses a modified electroencephalogram (EEG) to predict the likelihood that an anaesthetised patient has awareness of their surroundings. This method of monitoring was developed by analysing the EEGs of approximately 1000 patients with normal neurological function. It therefore has questionable applicability to those with neurological disability which may cause abnormal EEG patterns. Aim: To review the literature and establish whether the BIS monitor can be used to measure depth of anaesthesia in patients with neurologic disability. Method: Databases including Ovid MEDLINE, the Cochrane Central Register of Controlled Trials, EMBASE and PubMed were searched to identify studies investigating the use of the BIS in patients with neurological disability causing atypical EEG patterns. Results: Four case reports and four observational studies were found describing patients with Alzheimer’s disease, vascular dementia, intellectual disability, epilepsy and congenitally low EEG, who were monitored with the BIS when undergoing anaesthesia. In general, these studies showed patients with neurologic disabilities score lower on the BIS even when fully aware than their non-disabled peers; however, relative changes in BIS score appear to reflect reasonably accurately changes in conscious state and likelihood of awareness. Conclusion: The BIS score fails to provide an absolute measure of level of consciousness in patients with neurological impairment and should not be relied upon as the sole measure of awareness. It can, however, provide a relative measure of change in consciousness.

“The anaesthetist and surgeon could have before them on tape or screen a continuous record of the electric activity of… [the] brain.” F. Gibbs, 1937 [1] 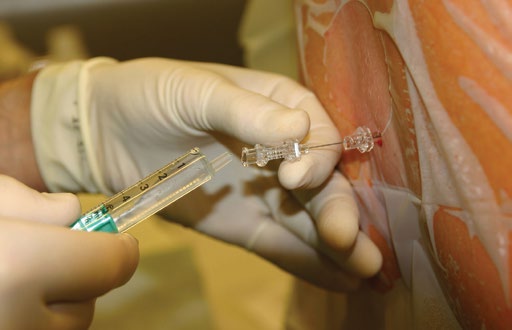 Originally, monitoring depth of anaesthesia involved the use of clinical signs considered proxies for consciousness, such as those described by Snow in 1847 and later by Guedel. [2,3] Subsequent calculations of the minimum alveolar concentration improved monitoring and reduced  the  incidence  of  awareness.  More  recently,  however,  it has been recognised that intra-operative awareness can occur independently of sympathetic responses or changes in end tidal concentration parameters. [4] Awareness under anaesthesia is defined as “consciousness under general anaesthesia with subsequent recall”, [5] which is commonly detected via patient self-reports or the use of a structured interview, such as a ‘Brice’ questionnaire. [6] The current incidence of awareness is estimated as occurring in 0.1-0.2% of surgical procedures. [7] Though uncommon, episodes of intra-operative awareness can have significant negative psychological consequences. [8] These consequences have the potential to be greater in patients with neurological disease as they may lack insight into their medical condition and the need for surgery.

The EEG was first suggested as a way to overcome the shortcomings of clinical measures of awareness in 1937. [1] Since then, there have been numerous attempts to achieve this, culminating with the production of the bispectral index (BIS) in 1996. The BIS uses a proprietary algorithm to transform the EEG into a single, dimensionless number between 0 and 100. 100 correlates to “awake”, 40 to 60 to “general anaesthesia” and 65-85 to “sedation”. The mathematics of bispectral analysis are beyond the purview of this paper but are detailed elsewhere. [9] A trial in patients at high-risk for awareness, but without neurological illness, found significant reductions in rates of intra-operative awareness, though similar successes have not been replicated elsewhere. [10,11]

Importantly, the algorithm underpinning the BIS was developed by analysing the normal electroencephalograms (EEG) of over 1000 healthy volunteers. Patients with neurologic disease, however, often have underlying structural or physiological abnormalities that manifest themselves as abnormal EEG findings. This has been demonstrated in a variety of psychiatric, degenerative and developmental disabilities. [12] Atypical EEG patterns not taken into consideration during the development of the algorithm can therefore influence BIS levels independently of the depth of anaesthesia. [13] Theoretically, this reduces the BIS’s ability to accurately measure depth of anaesthesia in patients with neurological disease. [14]

To review the literature and establish whether the BIS monitor can be used to measure depth of anaesthesia in patients with neurologic disability.

A search was undertaken of the medical literature. The following keywords and their alternative spellings were mapped to their medical subject headings: neurology, cognitive disability, intellectual disability, BIS, bispectral index and intra-operative monitoring. These keywords were combined with appropriate Boolean operators and used to search databases including Ovid MEDLINE, the Cochrane Central Register of Controlled Trials, EMBASE and PubMed.

The results of a prospective observational study suggest the BIS may be of limited use in monitoring patients with Alzheimer’s disease or vascular dementia. [15] The study compared 36 patients with dementia with 36 age-matched controls. It found that patients with these conditions had an awake BIS on average of 89.1, 5.6 lower than age-matched controls with a baseline of 94.7, and below 90, considered the cut-off point indicating sedation. [16] These results indicate the BIS values corresponding to awareness validated in normal patients may not apply to those diagnosed with Alzheimer’s disease or vascular dementia. Participants in this study were not anaesthetised, so response in BIS to anaesthesia was unable to be assessed. Therefore, it could not be determined whether the BIS intervals which correspond to general anaesthesia and sedation in normal patients were applicable to Alzheimer’s patients or alternatively whether they would need to be anaesthetised to a lower BIS given their lower baseline level.

The BIS in intellectually-disabled patients has been investigated in two prospective, observational studies, though these provided conflicting results. The first compared 20 children with quadriplegic cerebral palsy and intellectual disability with 21 matched controls at a number of clinical endpoints. [17] The mean BIS of children with cerebral palsy was significantly lower at sedation (91.63 vs 96.79, p = 0.01), at an end-tidal sevoflurane concentration of 1% (48.55 vs 53.38, p = 0.03) and at emergence (90.73 vs 96.45, p = 0.032). The authors concluded validation of the BIS in children with intellectual disability may be tenuous. However, though the absolute BIS scores were different between these groups, the relative reduction in BIS score and pattern of change at increasing levels of anaesthesia was similar. The BIS may therefore not be a guide to the absolute depth of anaesthesia, but changes indicate increasing or decreasing awareness. It should be noted that this study was performed in children, for whom the BIS was not developed, as opposed to adults. The difference in EEGs between adults and children may therefore have confounded these results.

The  second  article described  a  prospective observational study  of 80 adolescent and adult patients with varying degrees of intellectual disability undergoing general anaesthesia for dental procedures. [18] The aetiology of intellectual disability varied between patients but was predominately due to autism, cerebral palsy or Down syndrome. The study found no statistically significant difference in BIS scores between patients with mild, moderate, severe or profound disability at eight different clinical endpoints (awake, induction of anaesthesia, intravenous catheter placement, tracheal intubation, start of surgery, end of surgery, awakening to commands, and tracheal extubation). The only statistically significant finding of the study was that patients with more severe intellectual disability took longer to emerge from anaesthesia. The BIS monitor, however, accurately predicted this and provided an additional clue to the anaesthetist of the time required until extubation. These results indicate that intellectual disability does not affect the BIS and support the authors’ hypothesis that the BIS score is “a measure of global neuronal function, not a measure of the aberrant neuronal connection” [18] and could therefore be applied to these patients.

Though these two studies provide conflicting results on whether intellectual  disability  affects  the  absolute  BIS  level,  both  provide good evidence that relative reductions in BIS scores correlate well with increasing depth of anaesthesia in these patients. The BIS may therefore have a role in monitoring changes in conscious states.

Despite the known ability of epilepsy to cause significant derangement of the EEG, only three case reports were found which dealt with this in relation to the BIS. The first describes a patient with pre-existing epilepsy undergoing surgery. [19] Despite no clinical change, the patient’s BIS score dropped sharply from 40 to 20 before recovering every five minutes. This occurred over a period of hours until the raw EEG was checked and found to show epileptiform activity. Anticonvulsants were given at which point the BIS stabilised. In another report, seizures were evoked using photic stimulation. [20] Despite the patient remaining conscious, the BIS level dropped to 63 during the seizure. In the third case report, a patient in status epilepticus had a measured BIS of 93 despite being unconscious. [21] This dropped to 23 with control of the seizures. These reports provide strong support for the assertion that “BIS values may not accurately reflect the actual level of consciousness when abnormal EEG activity is evoked in epileptic patients”. [20]

In these studies of epilepsy, when patients were not ictal, BIS scores provided measures of depth of anaesthesia that were as accurate as would be expected in non-epileptic patients. The seizures themselves were heralded by large, rapid changes in the BIS, as was their recovery. Epilepsy is not therefore a contraindication to monitoring with the BIS, but anaesthetists should be aware that abnormal BIS scores may be the result of seizures rather than changes in depth of anaesthesia. Furthermore, in instances of sudden changes in the BIS the raw EEG can be checked to determine if the change is due to seizure activity.

The final description of a neurological condition affecting the BIS found in the literature was a congenital, non-pathological low amplitude EEG. In one case report, a man with this condition, despite being fully conscious, had a recorded BIS of 40. [22] This is on the low edge of the level considered ideal for general anaesthesia. As many as 5-10% of the population may show this rhythm when attached to an EEG, which is genetically determined and not associated with any pathology. [23] The current BIS algorithm is incapable of distinguishing awareness from anaesthesia in these patients.

A search of the literature showed almost all neurological conditions which were studied cause abnormal BIS levels. Alzheimer’s disease, vascular dementia, intellectual disability, epilepsy and congenitally low amplitude EEG were studied and all disease states, except intellectual disability, in which the results were conflicting, were shown to affect the BIS. It is far from clear whether the BIS may have a role in intra- operative awareness in addition to standard clinical measures in patients  with  neurological  disease.  The  use  of  BIS  in  these  cases may therefore mislead the anaesthetist rather than help them. If the anaesthetist does choose to use the BIS to monitor these patients, the BIS should be measured at baseline as the relative reduction in BIS scores may be more important than the absolute value in these patients. Given the lack of published data on this subset of patients, further controlled trials or subgroup analysis of existing trials that compares the use of the BIS against anaesthetic outcomes in patients with neurological disease would be a worthy avenue of future research.

[2] Snow J. On the inhalation of the vapor of ether in surgical operations: containing a description of the various stages of etherization and a statement of the result of nearly eighty operations in which ether has been employed in St. George’s and University College Hospitals. London: Churchill J; 1847.