English-speaking background and its relationship with length of stay in elderly patients admitted to a subacute setting: a retrospective study

Introduction: Despite the resource implications of extended inpatient stays, the impact of a non-English speaking background (NESB) on length of stay (LOS) has not been studied in the subacute geriatric population. We investigated the relationship between language background and LOS in elderly subacute inpatients. Method: A retrospective file audit of subacute inpatients (aged≥75) was conducted. LOS, language background, interpreter requirement, comorbidities, functional status (Functional Independence  Measure  (FIM)),  history  of  dementia/delirium, and discharge destination were noted. Results: 121 records were audited. 45 (37%) were identified as NESB with a median LOS of 21 days [IQR 13.0, 41.0] compared to 19 days for patients with an ESB [IQR 8.8, 35.8]. The median LOS for NESB patients who required an interpreter (n=24) was 27.5 [IQR 14.4, 44.8] compared to 17.0 [IQR 10.0, 40.0] for those who did not (n=21). There were no statistically significant differences in LOS found between ESB patients and NESB patients who required an interpreter (p=0.272), or NESB patients who required and did not require an interpreter (p=0.232). When short LOS patients (<22 days) were compared to long LOS patients (≥22 days), we found a significant association between a longer LOS and history of dementia/delirium (p=0.038), lower admission FIM score (p<0.001) and discharge destination. Those with short LOS were significantly more likely to be discharged to acute care, and those with long LOS to home or residential care (p=0.003). Conclusion: We did not find a statistically significant difference in LOS between ESB and NESB in subacute patients aged over 75. However, an association between longer LOS and a history of dementia, delirium or cognitive impairment; lower admission functional status; and discharge to home or residential care was found. 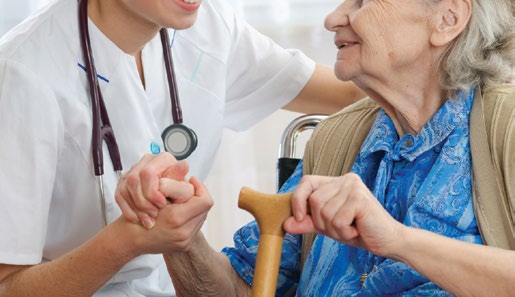 Australia is a multicultural country. Persons from a Non-English Speaking Background (NESB) now comprise a large and growing proportion of Australia’s ageing population. [1] The 2011 census revealed that greater than thirty-two percent of households in Greater

Melbourne reported speaking two or more languages at home. [2] Language barriers have the potential to impact multiple aspects of health care delivery for older people, including effects on diagnosis, prevention  of  complications,  engagement  in  treatment  decisions, and timely discharge planning. [3] These factors have been shown to increase hospital length of stay (LOS), which is undesirable for both patients and the health care system. [3]

Associations between NESB and LOS have been mostly investigated in acute care settings and younger populations, with mixed results. [3-8] A retrospective study in a Canadian Paediatric Emergency Department (ED) revealed longer LOS for families that did not speak English. [4] A prospective cohort study in another Paediatric ED in Chicago (USA) found a 20 minute longer stay for patients who spoke a different language to the clinician. [5] A retrospective study by John-Baptiste et al. in a heterogeneous inpatient population in Canada showed a 0.5 day longer LOS for patients with limited English proficiency. [3] Conversely, studies in a psychogeriatric setting in Western Melbourne and medical inpatient settings in Californian hospitals found no significant difference in LOS between English speaking background (ESB) and NESB patients. [6-8]

Elderly patients admitted to subacute care such as a rehabilitation ward or Geriatric Evaluation and Management (GEM) unit typically have a longer LOS to address complex needs. [9] A number of factors influencing  LOS  in  subacute  care  have  been  identified,  including pre-existing disability, cognitive impairment, recurrent falls, urinary incontinence and lack of supportive living arrangements. [10-12] However, the impact of a NESB in elderly patients on LOS in a subacute setting has not been investigated to our knowledge, and is of particular relevance in the context of an ageing and diverse population due to the resource implications of an extended LOS. [13]

Our primary aim was to investigate the relationship between language background (ESB vs. NESB) and LOS in older patients in a subacute setting in metropolitan Melbourne. Our secondary aim was to explore other factors associated with an increased LOS in this setting.

Monash  Health  caters  for  the  South  Eastern  catchment  area  of Melbourne, which is the largest in Victoria in terms of population. The 2011 census found that 44.4% of people living within the City of Monash reported speaking a language other than English at home, compared to 29.1% in Greater Melbourne. [14] Monash Health services a large NESB population and as such, it is ideally placed to research the impact of linguistic diversity on health care delivery.

Study participants were older patients (aged 75+) admitted to any subacute medical ward within Monash Health. Subacute care in Monash Health is located across the South-Eastern Region in three centres. The term ‘subacute’ encompasses two inpatient streams: GEM and Rehabilitation (Rehab). GEM encompasses the subacute care of chronic or complex conditions associated with ageing, cognitive dysfunction, chronic illness or disability. It is conducted by a geriatrician and a multi-disciplinary team for a defined episode of care. [15] Rehabilitation aims to maximise independence and quality of life for people living with a disabling medical condition. Multidisciplinary care is provided in an inpatient setting with an aim to minimise long-term care needs and community support to bring about considerable cost savings both in acute health care, and in long-term social security. [15]

This project was a retrospective file audit of consecutive discharges from subacute wards between February 2012 and February 2013. Inclusion and exclusion criteria are detailed in Table 1.

The lower age limit for our study was selected as being 75 because this age range captures the ‘old’ and ‘oldest-old’ categories, while excluding the ‘young-old’ (65-74 years) category who are likely to have less complex care needs.

Language background status was ascertained from the patient admission cover sheet. Assessment of whether an interpreter was

Length of stay was calculated from the admission date and discharge date in the discharge summary of each participant record.

The project was approved as a Low/No Risk research activity by the Monash Health Ethics Committee (Ref: 13048L).

There were 201 discharges from subacute settings within Monash Health between February 2012 and February 2013, of which a total of 121 discharges met the eligibility criteria. The average age of the patients was 83.2 years old (SD=5.2). Male patients represented 46%. The languages spoken by NESB patients were most commonly Greek (16%) and Italian (13%).

In terms of discharge destination, more patients from the NESB group were discharged home with supports (33%) compared to the ESB group (21%). A large proportion of both ESB and NESB patients were discharged to an acute inpatient unit; 55% and 53% respectively. 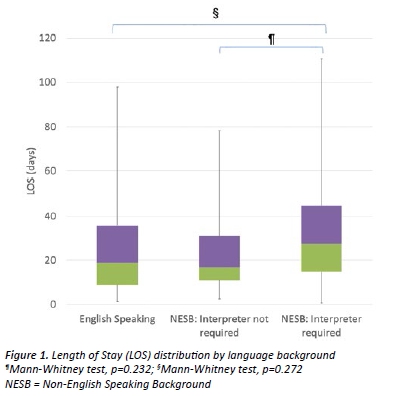 The purpose of Comparison 3 was to identify other variables associated with LOS status (long LOS ≥ 22 days, short LOS < 22 days). The long LOS group was associated with a history of dementia/delirium/cognitive impairment, lower functional status (FIM score) at admission, and discharge to home or residential care (Table 3). No relationship was found between age or interpreter requirement and LOS status (Table 3). 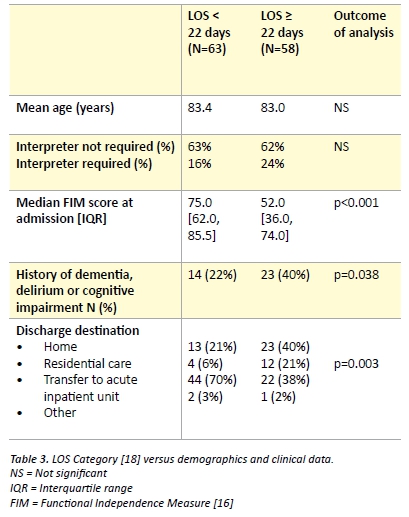 The study confirmed that a large number of Monash Health’s elderly subacute patients are from a Non-English Speaking Background (NESB), consistent with the proportion reported by 2011 Census data. [2]

NESB patients in Australia may find it difficult to communicate with the doctor and navigate the health care system. [19] This may be especially the case for elderly Non-English Speaking patients, as they have a high burden of chronic disease, disability and impairments, and have complex medical, functional and social needs. [20] A survey of Aged Care Assessment Service clinicians in Victoria cited the availability and quality of interpreters as a significant challenge in assessing culturally and linguistically diverse clients. [21] Communication difficulties have been found to make the assessment of cognitively impaired patients more challenging. [21]

Both Rehabilitation and GEM require high levels of patient cooperation and understanding in order to engage with multidisciplinary care, including physiotherapy, occupational therapy, and social work. [9] We hypothesised NESB status would be associated with a longer LOS for elderly patients in subacute care due to language barriers faced during complex multi-disciplinary care. However, we did not find a significant difference between the patients who were NESB compared to ESB patients. Comparison 1 found a trend towards a longer median LOS between patients who were from NESB requiring an interpreter, compared to ESB patients, although this was not statistically significant.

Our finding of a similar LOS for ESB and NESB is not unique. A study of a psychogeriatric unit in Melbourne [6] and American studies of inpatients in acute medical settings found no difference in LOS between ESB and NESB patients. [7,8]

These findings are interesting because they are counterintuitive, and the reasons for the lack of relationship deserve further investigation. It is possible that health services that provide care for a large NESB population, such as Monash Health, already have effective procedures in place to support communication between staff and NESB patients and their families. Alternatively, it may be that NESB patients are consulted less often due to language barriers, and decision-making is conducted without involvement of the patient. While such practice could reduce LOS, it may result in lower satisfaction with care and quality of care. For example, research conducted in North America has shown language discordance in the physician-patient relationship may result in reduced satisfaction and poorer health outcomes. [22,23] While a study of NESB patients in a Queensland Emergency Department reported increased rates of patient satisfaction when an interpreter was used compared to patients who did not utilise an interpreter. [24] Future studies of the subacute population could focus on satisfaction and health outcomes of NESB patients.

Although NESB was not associated with increased LOS in our study, we did identify a number of other factors associated with a longer LOS. When short LOS patients (<22 days) [18] were compared to long LOS patient, we found a significant associated between a longer LOS and patients with dementia/delirium, lower admission FIM score and discharge destination. Those with a short LOS were more likely to be transferred to acute care and those with a long LOS to home or residential care.

One of the limitations of this study is that it was retrospective. Retrospective analyses suffer from the fact that the data being analysed was not originally collected for the purpose of the study. The accuracy of data depends upon diligently prepared medical records by medical, nursing and allied health professionals. There were instances in this study where the language background of the patient was not clearly recorded in the patient’s medical record, which led to the file being excluded from the study. This study also revealed that Allied Health and Nursing staff noted the language and social background of the patient in their notes more often than Medical staff. In addition, the generalizability of this study is limited in that it was conducted within one health service and in one state of Australia. The power of the study is limited by the fact that only 121 patient records were studied.

A final limitation of the study is the high number of patients who were transferred back to an acute inpatient unit during their subacute stay (Tables 1 and 2). The LOS for some of these patients may have been underestimated as the majority actually returned to subacute and continued their rehabilitation following the resolution of their acute medical problem. Future work could include repetition of this analysis with LOS calculated using combined admission times and/or exclusion of cases where patients were transferred unexpectedly and did not return to subacute care.

Our study did not reveal a statistically significant difference in LOS between subacute inpatients aged over 75 of English speaking and non-English   speaking   backgrounds.   Variables   that   were   related to longer LOS were a history of dementia, delirium or cognitive impairment, lower admission functional status, and discharge to home or residential care.

To my co-authors and the Monash Health Medical Academic Scholarship Committee: This project would not have been possible without your encouragement and guidance. Thank you.