Impact of socioeconomic status on the provision of surgical care

In Australia, there is an association between low socioeconomic status (SES) and poor health outcomes. Surgical conditions account for a large portion of a population’s disease burden. The aim was to determine the difference in provision of surgical care and patient satisfaction between low and high SES communities in Sydney, Australia. A cross sectional analytical study was conducted using questionnaire-based data. Patients were recruited from five general practice centres across low and high SES areas. Participants were eligible for this study if they had surgery performed under general anaesthesia  within  the  last  five years.  Analysis  was performed to determine whether waiting times for surgery and surgical consultations were different between low and high SES groups, and whether private health insurance impacted on waiting times. A total of 107 patient responses were used in the final data analysis. Waiting times for elective surgery were longer in the low SES group (p=0.002).The high SES group were more likely to have private health insurance (p <0.001) and were 28.6 times more likely to have their surgery in a private hospital. Private health insurance reduced waiting times for elective surgical procedures (p = 0.004), however, there was no difference in waiting times for initial surgical consults (p=0.449). Subjective patient satisfaction was similar between the two groups. In conclusion, our study demonstrates that SES does not impact on access to a surgical consultation, but a low SES is associated with longer waiting times for elective surgeries. Despite this, patients in both groups remained generally satisfied with their surgical care. 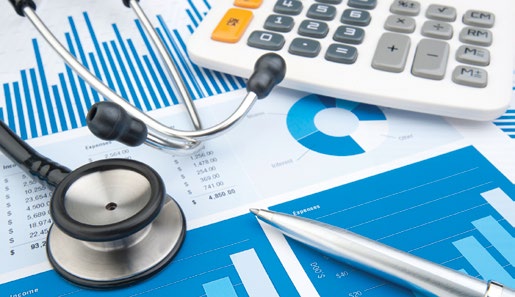 In Australia, low socioeconomic status (SES) has been linked to poor health outcomes [1] with a 1.3 times greater mortality risk in low SES areas when compared to the highest SES areas. [2-3] Individuals living in more disadvantaged areas are more likely to engage in unhealthy behaviours, and their poorer health is reflected in more frequent utilisation of health care services. [4] Greater Western Sydney represents one of the lowest SES areas in Sydney, Australia [5] and according to the Socio-Economic Indexes of Areas (SEIFA), contains eight of the ten most disadvantaged areas in Sydney. [5-6] For general elective procedures, average waiting times in Greater Western Sydney hospitals varied from 23 to 93 days, compared with 4 to 36 days in other areas of Sydney. [6] Thus, timely and easily accessible provision of surgical services is a growing necessity for the expanding population of Greater Western Sydney.

The research was approved by the University of Western Sydney Human Research Ethics Committee (H9067).  The SEIFA [7] score was used to determine the areas chosen for data collection. A total of five Sydney General Practices, three located in low SES areas and two in high SES areas, were chosen randomly for patient recruitment.

The data collection tool employed was a survey which included questions relating to SES factors, health fund status, comorbidities, details of the surgical procedures undertaken, waiting times for operations,  follow-up   consultations,  post-operative   complications and patient satisfaction. The survey and written consent were offered to all General Practice waiting room patients over a period of two weeks by the authors. Patients were eligible to participate if they had undergone a surgical procedure in Sydney, performed under general anaesthesia within the last five years. The survey was anonymous with no personally identifying information recorded.

Data were analysed using Microsoft Excel 2010 and SPSS software version 22.0. Logarithmic values were calculated for all data sets and t-tests performed for analysis. Chi-squared analyses were conducted to assess the effect of private health insurance on hospital choice.

A total of 107 surveys were eligible for analysis after excluding dental procedures, colonoscopies, procedures performed outside Sydney, emergency procedures, caesarean sections and respondents under 18 years of age.

Table 1 illustrates the characteristics of the sample studied. Notable differences between responses from high and low SES areas include level of education and private health insurance status. The median ages were 56 for low SES and 66 for high SES (p=0.02). Table 2 displays the types of surgical procedures that were included in the study. 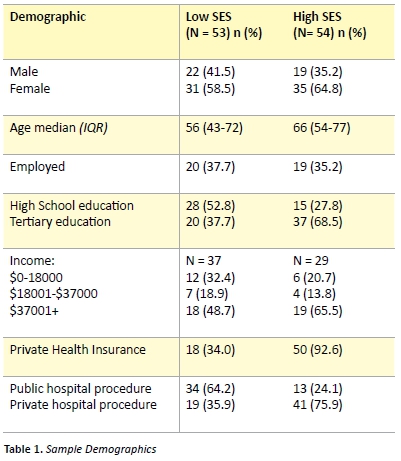 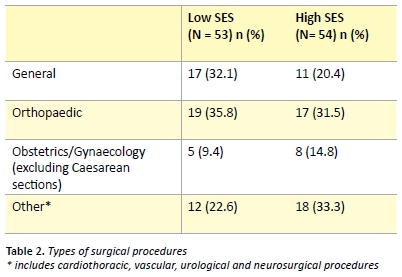 Responders with private health insurance were 28.6 times (p < 0.001) more likely to have surgery performed at a private hospital.

Table 3 demonstrates rates of patient satisfaction between the low and high SES groups. There was an overall trend for patients in the lower SES groups to be dissatisfied with waiting times but be generally satisfied with other aspects of surgery.

The study found that patients from lower SES groups had less private health insurance and longer wait times for surgery. Despite this, a high level of satisfaction was expressed across both SES groups regarding surgical outcomes and overall medical care during hospital admission.

These findings were anticipated and are consistent with previous research which has shown that patients in the public system experienced longer waiting times and were 60-95% less likely to undergo surgery than private patients. Furthermore, privately insured patients were also found to have greater access to surgical care, shorter overall length of stay and lower mortality rates. [8] This relationship creates the premise that increasing access to private care will relieve the burden on the public system and reduce waiting times. However, the converse has been shown to be the case, with an increase in waiting times for surgery when access to private hospitals is increased. [9] The trend for generally high levels of satisfaction is counter-intuitive, however, is consistent with the literature. [10-11]

The implications of longer waiting times in Western Sydney is of concern because the region’s population is expected to grow by 50% over the next 20 years, a growth of 1 million people [12], and the availability of health care services will have to expand to accommodate this increasing population. There are increasing numbers of additions to public hospital elective surgery waiting lists every year. [13] Availability and staffing of beds in public hospitals are lower in the Western Sydney region, and there is a relative lack of private hospitals compared to the wider Sydney metropolitan area [6]. Compounding the issue of access

to healthcare are lower rates of private health insurance membership and the generally poorer health of low SES populations. [6] It becomes apparent  that  there  is  a  relative  lack  of  services  available  in  low SES areas of Sydney. It is estimated that the cost of funding enough public hospital beds to accommodate a populace of this size would be a minimum of $1.29 billion a year. This poses the risk of escalating inequality in access to health services between the low SES areas of Western Sydney and the wider metropolitan area. [6] The NSW government has invested $1.3 billion from the recent health budget to upgrade existing hospitals [14], however, ongoing funding of these hospitals will need to increase to accommodate the growing demand. [6]

Data were collected from a small number of locations across only three SES regions in Sydney, providing a limited sample size for analysis. Recall bias would also have an impact on accuracy of responses, despite the criteria for a five year cut off. Future research would benefit from increasing data collection across a larger number of SES sites to reduce any possible sample bias. Furthermore, expanding data sources to include hospital databases would minimise recall bias, allowing for more objective and accurate data regarding the length of time spent on surgical waiting lists and utilisation of private health cover.

It is well established that a low SES is associated with poorer health. This study has found that patients from low SES areas experienced longer waiting times for elective surgery. A contributing factor to the longer waiting times was possession of private health insurance. Patients from low SES areas felt that they waited too long for their surgery; however, overall satisfaction ratings were generally high across both SES groups. The interplay between SES and the public and private health systems has created a disparity in access to timely elective surgery.