This report describes a case of a 33-year-old female with cyclical vomiting associated with cannabis use, which was subsequently diagnosed as Cannabinoid Hyperemesis Syndrome (CHS). While the exact epidemiology of CHS is unknown, cannabis is the most commonly used illicit substance in Australia and the world.

CHS is typically characterised by the triad of heavy cannabis use, severe nausea and vomiting, and compulsive hot water bathing. The peculiarity of this condition lies in two specific associations: the link between cannabis and hyperemesis, as cannabis is usually known for its antiemetic properties, as well as the association with hot water bathing.

The following will describe a clinical case of CHS with a subsequent discussion    on    its    pathophysiology,    work-up,   management, and a review of the current literature. It will also discuss how a multidisciplinary approach can be utilised to manage both medical and social aspects of this diagnosis. 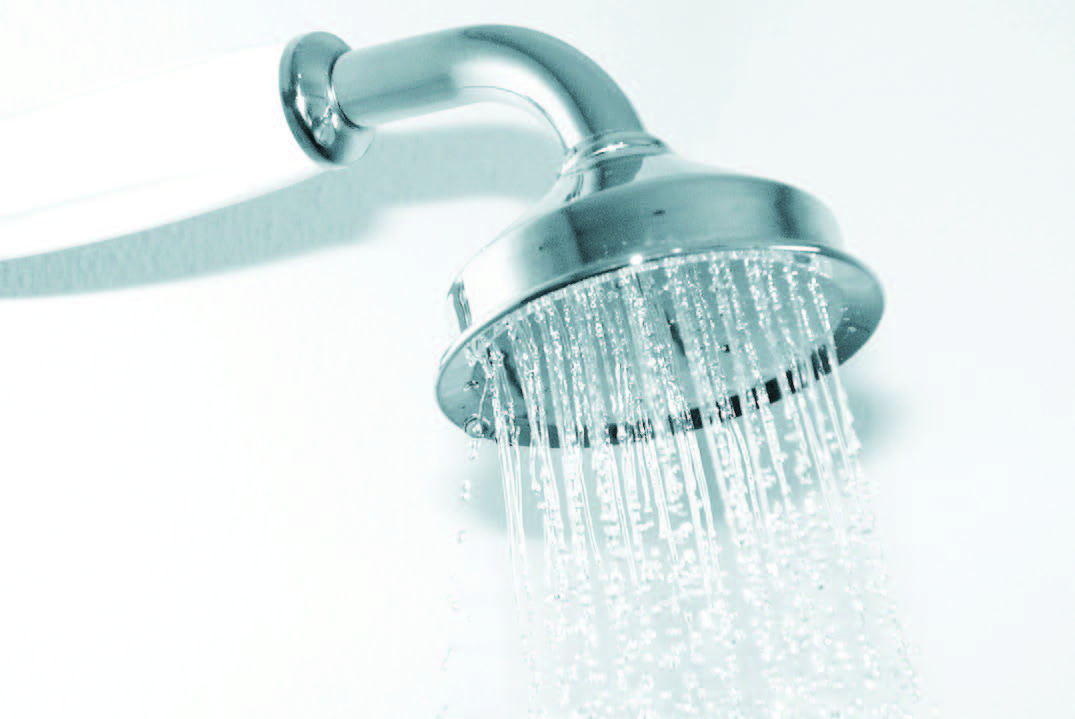 Ms AB, a 33-year old female, presented to the Emergency Department with abdominal pain, nausea, and vomiting
over the previous ten hours on a background of several years of cannabis and alcohol abuse. Her pain was generalised, dull, and had no particular aggravating or relieving factors. Her vomiting occurred every 20 minutes with no haematemesis, and there was no associated relief of her abdominal pain. Her last bowel movement was soft and twelve hours prior to admission, and there was no haematochezia or melaena.

Similar episodes of vomiting and abdominal pain have occurred several times over the past three years, with each prior episode lasting four to five hours and usually the day after abstinence from consuming cannabis. AB has found that taking hot showers multiple times a day provided her relief from her symptoms.

She last consumed cannabis and alcohol the day prior to admission. AB has consumed cannabis for the past 19 years (0.5 grams, 20 times a day), alcohol for the past twelve years (one bottle of spirits per day – approximately 20 standard drinks) and cigarettes (ten per day) for the past six years. AB is also a former intravenous (IV) drug user,however ceased 16 years ago after being diagnosed with hepatitis C. Her only other significant medical history is depression since 2005, for which she is prescribed 100mg of sertraline; however admits to taking this infrequently. She has never been pregnant and her last menstrual period was seven days ago.

Family history revealed a history of alcohol, drug abuse and mental health disorders in several first and second-degree relatives including her mother and father. She lives alone in Townsville and has had several failed rehabilitation admissions over the last few years. Systems review was unremarkable.

On admission, AB patient was agitated and distressed; however, was orientated to time, place and person.

Her hands were warm and sweaty with a capillary refill time of less than two seconds. There was conjunctival pallor. There was no jaundice, Osler’s nodes, Janeway lesions, track marks, cyanosis or peripheral oedema. Four spider naevi were noted on the anterior chest wall.

There was no lymphadenopathy.

Her abdomen was mildly distended with generalised tenderness and a positive Carnett’s sign. There was no guarding or rebound tenderness present. There were no masses or organomegaly and bowel sounds were present. Examination of her cardiovascular system revealed dual heart sounds with no added sounds and her jugular venous pressure was not elevated. Her chest was clear on auscultation. Neurological examination was unremarkable.

Basic investigations were carried out as per Table 2. A hepatitis C viral load, liver ultrasound and biopsy, and upper endoscopy were also indicated to rule out acute causes, however, were not performed. 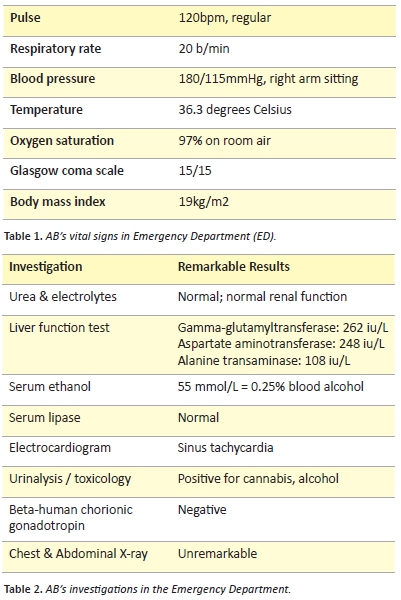 In ED, AB was given IV fluids, electrolytes, analgesia (paracetamol), thiamine, ondansetron (3 x 0.15 mg/kg doses) and metoclopramide (10mgIV) for her vomiting, and diazepam (20mg PO) for her withdrawal symptoms. Upon ward admission, she was also administered deep vein thrombosis prophylaxis.

On the ward, AB took up to ten hot showers a day, which she claimed helped with her symptoms. Due to her cyclical vomiting and history of past episodes, CHS was diagnosed. After being admitted for six days, liaising with the social worker led to AB’s discharge directly to a community-based drugs and alcohol rehabilitation clinic.

Cannabis remains one of the most widely used illicit substances in Australia, with approximately one-third of Australians having tried it at least once in their life and one-tenth in the past year. [1] CHS was first described by Allen et al. in Adelaide, South Australia in 2004. [2] There are currently no epidemiological data on the incidence or prevalence of CHS among regular cannabis users. [3]

The diagnosis of CHS is made clinically based on the characteristic features. There are no diagnostic tests for confirmation of this disease. Therefore, very careful attention should be made to exclude more common and serious disorders first.

CHS is a cyclical disorder separated by symptom-free periods, which can be broken down into three phases: prodromal, hyperemesis and recovery. The triad of cardinal features include: [4]

The most peculiar clinical feature is the compulsive bathing. It is so consistent amongst cases that multiplestudies [3-7] have given it pathognomonic status for CHS. [3] It is not part of any psychosis or obsessive compulsion; rather, it is a form of learned behaviour, which becomes a compulsion once established in order to provide relief from severe nausea, vomiting and abdominal pain. [7]

The recovery phase can last from days to weeks and involves the person returning to relative wellness and normal bathing patterns. [6]

Cannabis   has   traditionally  been   associated   with   an   antiemetic effect, which is why the concept of linking its abuse to hyperemesis seems paradoxical. Cannabis contains over 60 different cannabinoid substances,so without detailed research into all of these, it will be difficult to formulate an agreed-upon pathophysiology. [2]

From what is known, cannabinoids act on two types of cannabinoid receptors,  CB1  and  CB2.  Theseare  G-protein  coupled  receptors and inhibit adenylyl cyclase. [8] The three main types of exogenous cannabinoids  found  in  cannabis  include  Δ9-tetrahydrocannabinol(THC), cannabidiol (CBD) and cannabigerol (CBG). [8]

At low doses, THC is thought to exert an antiemetic effect centrally, by activating CB1 receptors in the dorsal vagal complex of the brainstem, [6] with the CBD and CBG appearing to further potentiate this. However, animal models show that higher levels, in fact, enhance vomiting. [9]

This, in combination with THC having high liphophilicity, could lengthen its half-life causing toxic concentrations, in addition to its ability to delay gastric emptying and dysregulate the limbic system. [2,9] The peripheral effects of cannabis could then override the central mediated antiemetic effect, causing hyperemesis.

The physiology behind CHS’s most peculiar clinical finding, hot showering, requires more research. The hypothalamus is given much of the focus here, with subjective sensations initiating the need for a hot shower. There is debate between whether the body’s core temperature plays a role. One proposition is the behaviour is due to the hypothermic effect by THC on the body’s core temperature, whereas the other says it may be directly related to CB1 receptor activation. [10] Another theory is that the hot water causes a redistribution of the  blood  flow  from  the  splanchic  circulation  via  the  phenomena ‘cutaneous steal syndrome’, which then reduces stimulation of CB1 receptors in the gut bringing the patient temporary relief. [9]

All of these findings could be underlined by the proposition of Simonetto et al. that perhaps some patients may have agenetic polymorphism in cytochrome P450 enzymes responsible for cannabinoid metabolism, as it is uncertain why sofew patients develop CHS despite the large prevalence of cannabis use.[11]

Differentials for recurrent vomiting asidefrom CHS may include [4,7,9]:

A very common misdiagnosis of CHS is CVS; however, multiple features such as depression, anxiety and family history of migraines are typically negative findings of CHS, thus distinguishing the two.[6]

Management of CHS should be a multi-faceted approach starting in the emergency department. Firstly, one should complete a basic history, examination and work-up with the intent of ruling out common and life-threatening causes of acute nausea and vomiting.

Should it be warranted, unexplained vomiting and nausea could spark investigation for cannabis use. Normalising and asking questions without a negative tone is imperative to receiving honest answers. Sullivan [5] recommends asking, “have you ever tried marijuana for vomiting?” as well as “have you ever tried a hot bath or shower?” in order to gauge the likelihood for chronic cannabis use. In addition, one should ask the patient if they use synthetic cannabinoids as they can also cause CHS without showing up on immunoassay based urine drug tests. Synthetic cannabinoids are “designer drugs” constituent of alternative cannabinoids that produce similar pharmacological effects to cannabis by binding to the same cannabinoid receptors. Another limitation of immunoassay urine screening is despite it having ‘good sensitivity and specificity for THC’, [12] false positives can occur through cross reactivity with common drugs such as antoprazole and ibuprofen, passive inhalation of smoked cannabis as well as the use of hemp seed oil, which is why they should not dictate management in isolation. [13]

findings including mild leukocytosis, hypokalaemia, hypochloraemia, and elevated salivary amylase. Nonetheless, investigations outlined in Table 2 would be appropriate for initial workup of vomiting presenting in the ED. In some cases, haematemesis may indicate an upper endoscopy and neurological findings may indicate brain imaging. [6]

From a medical point of view, the following management approach in Figure 1 is a general consensus amongst physicians for CHS as the focus is on intravenous fluids and supportive care due to there being no clear recommended pharmacological treatment. [5-7,14,15] 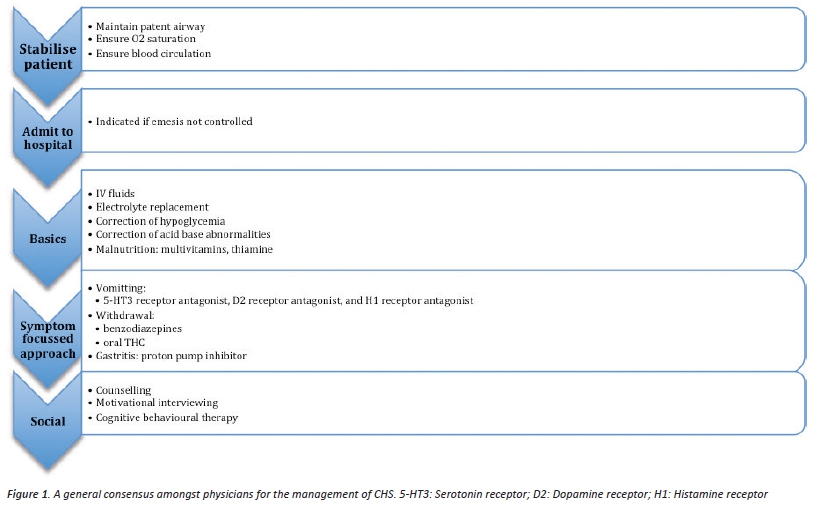 Limited data exists for specific management of CHS, as it can only be speculated that by treating cannabis withdrawal, CHS can also be avoided. This is why supportive therapy is the major focus for CHS with a specific emphasis on anti-emesis. Due to both gastrointestinal and centrally located receptors being involved, 5-HT3 receptor antagonists (most commonly ondansetron) and D2 receptor antagonists (metoclopramide) are utilised. However, these drugs are largely ineffective in CHS with studies showing little to no improvement in patients. [2] Recent animal studies have demonstrated that haloperidol has great potential as an anti-emetic due to intricate interactions between dopamine and CB1 signalling mechanisms. [16]

A study done on monkeys by Goldberg et al. found that dispensing rimonabant  markedly  reduced  self-administration  of  cannabis  but had no effect on self-administration of cocaine. [18] This is supported by findings by Huestis et al. where rimonabant blocked effects of smoked cannabis in human research volunteers, hence highlighting the potential for rimonabant for cannabis dependency, which could then prevent CHS from occurring. It was also seemed to be well tolerated and the only major side-effect being mild nausea. [19]

One of the most recent proposals to management involves activating TRPV1 receptors, which are found in the peripheries. Such receptors can be activated by heat greater than 42°C or capsaicin. Lapoint, as reported by Gussow, [20] proposes it is the heat activation of TRPV1 that resolves symptoms, with seven cases being treated successfully via the use of topical capsaicin to the abdomen.

In addition to the pharmacological aspect, social management of cannabis use is also important, as randomised-controlled trials have shown techniques such as single session motivational interviewing as well as cognitive behavioural therapy being very effective in cannabis use cessation and maintaining abstinence. [15]

The  diagnosis  of  CHS  is  made  clinically  after careful  consideration of more common illnesses. The three characteristic features of CHS include  heavy  cannabis  use,  recurrent  vomiting  and  compulsive hot water bathing. The treatment is largely supportive. Much of the pathophysiology and management is poorly understood and further investigation is warranted.

Informed consent was obtained from the patient for this case report.

I would like to thank Dr. Paula Heggarty for her assistance.