Penny joined the University of Tasmania and the Launceston Eye Institute after completing a PhD at University College London. Penny’s background is in epidemiological research and evaluations of health services and health care interventions. In her spare time, Penny rescues and cares for neglected and abandoned ponies.

A/Prof Brendan Vote is a Clinical Associate professor in Ophthalmology at the University of Tasmania and a consultant ophthalmologist. He graduated from the University of Queensland. He established the Tasmanian Eye Institute that is devoted to research, education and service in ophthalmology. He has published more than 80 peer reviewed articles. A/Prof Vote is an avid squash player and skier, as well as keen follower of cricket.

Conclusion: Combined cataract and ERM vitrectomy is as effective as consecutive operations for improving VA, whilst reducing patient exposure to the risks associated with two separate procedures. 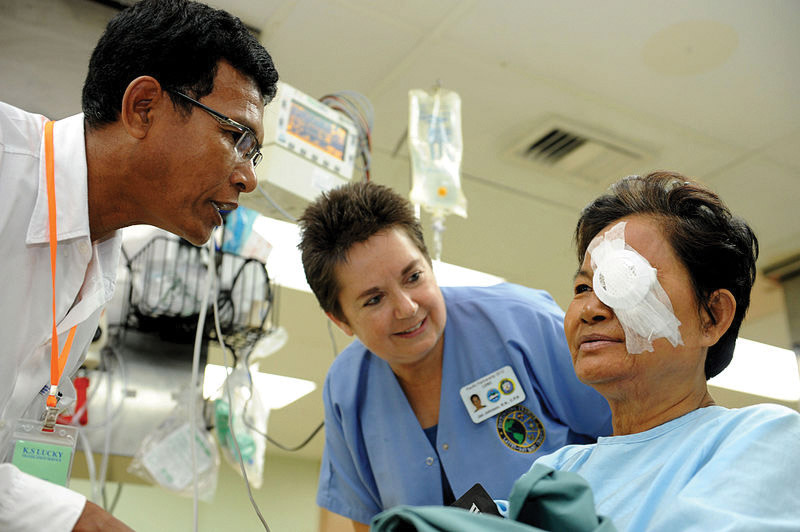 The epiretinal membrane (ERM), also referred to as macular pucker or cellophane maculopathy, is a sheet of fibrous cells on the surface of the retina.  Proliferation of the fibrous cells and the subsequent contraction of the membrane lead to defective visual symptoms, in particular distortion and blurred vision. ERM is a relatively common occurrence with ageing, with the prevalence of ERM ranging from 8.6% to 12.1% amongst various ethnic groups and countries [1-3], and typically affecting patients over 60 years old [3]. Often symptoms are only minimal and ERM requires no intervention unless progression occurs. In some instances however, ERM adversely affects vision and requires treatment through surgical intervention with vitrectomy and an ERM peel procedure. Patients requiring treatment for ERM may have other comorbid eye conditions, such as cataract, which also need to be addressed. Therefore, the question arises if these two problems are best addressed simultaneously or sequentially. The current literature provides only small case series in answering this question and results have been mixed, although most papers have found no significant differences [5-7]. There is also a paucity of literature that compares combined surgery and cataract surgery prior to ERM peel.

Following approval from the University of Tasmania Human Research Ethics Committee (H0015009), we conducted a retrospective review of the medical records of patients who were diagnosed with ERM and underwent an ERM peel vitrectomy by a single surgeon. The surgeries were conducted in an Australian regional town (Launceston) between July 1, 2005 and May 12, 2014. Inclusion criteria were patients with pre-operative visual data and twelve month post-surgery follow-up visual data.

Snellen acuity measurement of best-corrected visual acuity (BCVA) was performed and the results were converted into a logarithm of the minimal angle of resolution (logMAR) before analysis. To utilise a stable BCVA, the twelve month post-operative follow-up BCVA was used in the final analysis. The surgeries were performed by one surgeon. Details on posterior vitreous detachment (PVD) and peri-operative complications were also collected.

Data from patient records were extracted into an Excel 2010 (Microsoft, Redmond, WA, USA) spreadsheet and imported into Stata 14.1 (StataCorp, College Station, TX, USA) for analysis. Continuous data distributions were investigated and one-way analyses of variance (ANOVA) were used to investigate baseline differences between the three groups (cataract surgery pre-ERM, combined, or cataract surgery post-ERM) with Tukey-Kramer post-hoc tests. For categorical data, crosstabs with Chi-square and Fisher’s exact tests were utilised to investigate differences among the three groups at baseline. These were also used to investigate complications and the proportion of eyes with VA improvements of one chart line or greater at three month and twelve month follow-ups for the cataract surgery pre-ERM group versus the combined surgery group. Independent t-tests were used for the investigation of mean change in VA (logMAR) and mean change in CMT from baseline to three month follow-up, and twelve month follow-up between the pre-ERM group versus the combined surgery group. All tests were two-sided and differences were accepted as significant at p<0.05.

BCVA is our main tool for predicting visual outcomes in ERM vitrectomy. It is a widely used and reliable prognostic factor to measure visual outcomes [4].  Our study utilised results from a single vitreoretinal surgeon and one centre, which provided consistency for this study, and reduced variation. We investigated outcomes in the combined surgery and the cataract surgery prior to ERM peel groups, due to the limited published research comparing these groups. For these outcome analyses, we excluded the cataract surgery post-ERM group.

Dawson et al [10] found pre-operative VA may predict visual improvements at follow-up. Our results confirm Dawson et al’s [10] research for both groups, with the strongest prediction being for the consecutive surgery group (pre-surgery VA is a stronger predictor of follow-up VA in consecutive versus combined surgery). In our study, the combined surgery group had better mean (logMAR) pre-operative BCVA, due to a greater proportion of eyes within the 6/15 to 6/24 range. To control for greater baseline visual acuity in the combined group, we analysed change in BCVA (logMAR) at follow-up between the two groups.

Eyes that had cataract surgery after ERM peel had approximately double the incidence of post-operative CMO compared to the combined surgery group. While this finding was not statistically significant, this may be explained by the small number of eyes that developed CMO in each group, resulting in a lack of power to detect a significant difference between the groups. Among the combined group in our study, 5.0% developed CMO. This concurs with previous studies that reported incidences of 3.6% to 8.1% in combined surgical cases [7,8]. A separate study also concluded no difference in the incidence of CMO between combined surgery and pre-ERM groups [9]. Due to the small sample size, and no eyes in the cataract surgery pre-ERM group developing CMO post-operatively, we were unable to determine if the incidence of CMO would have improved if consecutive surgery (either cataract surgery before or after ERM peel) was conducted. Perhaps a further study with larger population sizes would allow for a clearer understanding of this.

Limitations of this study include its retrospective design. Unfortunately, this was necessary to identify a substantial number of patients for inclusion (this required an eight year study inclusion period), as the study recruited patients from the only cataract and vitreoretinal surgeon in the region. A prospective study including patients from several surgeons would have less bias and the results would have greater generalisability. We excluded patients from the study if they did not return for post-surgery follow-up. This resulted in 29 combined surgery eyes and 33 pre-ERM eyes being excluded. If these eyes were included in the study, 21.6% of the combined surgery group and 34.7% of the pre-ERM would have been categorised as lost to follow-up. It is probable that patients lost to follow-up may have had better improvements in their VA. However, it is unknown to what extent the exclusion of these eyes may have introduced bias to the study results, particularly when comparing the two groups. The patients who underwent combined phacovitrectomy had a better mean (logMAR) VA and a greater proportion had a pre-operative VA of 6/24 or better. Given the presence of both pathologies, these patients underwent combined surgical procedures. However, some of these patients with both pathologies (ERM and cataract) may have had an acceptable VA improvement from cataract surgery alone, such that they would not have ordinarily proceeded to epiretinal surgery. In contrast, the patients in the cataract surgery prior to ERM peel group had already selected themselves into that group requiring ERM surgery as they were sufficiently affected by ERM. Thus, the patients in the consecutive surgery group potentially would not present for surgery unless already having a worse pre-operative VA than the combined surgery cohort.

We acknowledge that an analysis of a twelve month follow-up BCVA would include various confounders, such as new ophthalmic pathologies or worsening of pre-existing pathologies. Those factors were not taken into account during our analysis. As post-operative conditions tend to stabilise by three months following operation, we also analysed our patients at the three month follow-up period. The results were similar at three and twelve month follow-up intervals. Whilst we made an assumption that the patients were stable at three months, they appeared to continue improving after this time, as demonstrated by the twelve month follow-up results. Additionally, our comparison did not include patients who were diagnosed with ERM but only underwent cataract surgery, as they might not present for ERM peel secondary to acceptable visual improvements. Our consecutive group involved patients who underwent cataract operation then ERM peel. Some of these patients might have developed ERM only after the cataract surgery. Finally, our study is limited by the absence of baseline comorbidity data. As such, we were unable to assess the impact, if any, of comorbidities on VA improvements.

This study has shown that combined cataract and ERM vitrectomy is at least as effective as consecutive operations, if not better, for improving VA. As such, it may be prudent to conduct combined surgery, as it reduces patient exposure to the risks of two separate operations, as well as being more convenient for the patient.
Acknowledgements

We would like to thank the staff at the Launceston Eye Institute for their technical assistance in obtaining the dataset required for this research.