An eponymous world: what names should we use? 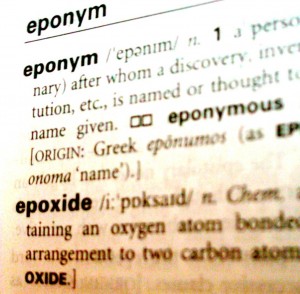 So you know all the manifestations of Marfan syndrome and have your head around Osler nodes and Janeway lesions, but have you ever heard of Tashima syndrome? Self-named in 1965, the condition is one in which a doctor seeks a “new sign, disease, or syndrome to which his name can be attached.”[1]

Such disease names are called eponyms and their use in medicine is extremely widespread. Eponyms may take the name of a discovering doctor (Parkinson’s disease), literary reference (Alice in Wonderland syndrome), mythological figure (Ondine’s curse) or, rarely, a patient (Lou Gehrig disease). [2] Eponymous disease names have always been a part of modern medicine however, their continued use is an area of considerable controversy.

Multiple arguments against eponyms in medicine have been made. The use of eponyms can be confusing as the terms used are not always descriptive or consistent. There are some diseases that bear multiple names, some names that refer to multiple diseases and even some diseases which have different names in different countries! Furthermore, inconsistencies between the use of possessive (Down’s syndrome) and non-possessive forms (Down syndrome) of disease names can lead to difficulty in locating information in literature searches. [3]

Traditionally a disease is named after the person first describing it, but this is not always the case. For example, Benediktos Adamantiades described the constellation of genital ulceration and uveitis seven years before Beçhet described this disease which would bear his name. [4,5] Many other examples of such misattribution exist and are used as an argument against eponyms. There is also controversy about the use of eponyms named after somebody who engaged in unethical behaviour. A well-known example of this is reactive arthritis, or Reiter’s syndrome. Exposure of Hans Reiter’s strong involvement in the Nazi party during World War II has led to calls for the term “reactive arthritis” to replace “Reiter syndrome”. [6,7] Reflecting this shift in the medical community, the use of the eponym “Reiter syndrome” in the literature has recently fallen out of favour. [8]

Eponymous names do, however, also have merits. For those conditions or syndromes which are a constellation of symptoms, eponyms can provide a brief phrase to encompass that disease. For example, Tetralogy of Fallot is a simple way of describing this complex cardiac defect. Practicalities aside, the use of eponyms appeals to those who, like me, are a little bit nostalgic. Eponyms provide a link to those practitioners who shaped the profession we are soon to join. They encourage us to remember their mistakes as well as their successes and serve as a reminder that despite all the science, the practice of medicine remains an art.

Whilst it would be impractical to rid medicine of all eponyms, the agreement by major international bodies on the best term, or “orthonym” [9] for a disease may reduce some of the confusion. It is also clear that some eponyms will disappear as our understanding of eponymous conditions improves. For example as our understanding of kidney disease has developed, the term “Bright’s disease” which encompassed several forms of glomerulonephritis has fallen out of use. To a certain extent, whether these terms continue to be used will be shaped by the choices we make as future medical professionals and the culture that develops. This is why, as the debate continues, it’s worth tuning in and taking part.

What do you think?

6.     Panush RS, Wallace DJ, Dorff RE, Engleman EP. Retraction of the suggestion to use the term “Reiter’s syndrome” sixty-five years later: the legacy of Reiter, a war criminal, should not be eponymic honor but rather condemnation. Arthritis and rheumatism 2007;56(2):693-4.