Should artificial resuscitation be offered to extremely premature neonates? 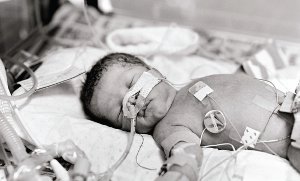 “‘Change’ is scientific, ‘progress’ is ethical; change is indubitable, whereas progress is a matter of controversy.” – Bertrand Russell

Forty years ago it was generally accepted that a baby born more than two months premature could not survive. Now neonates as young as 22 weeks can be kept alive with medical intervention. This essay will explore the medical, social and legal aspects of artificial resuscitation of extremely premature neonates and argue for a change to a palliative approach towards infants born at the threshold of viability.

Extremely premature newborns face a number of medical problems, affecting almost all systems of the body. These problems include extreme skin immaturity and fluid balance instability, lung immaturity and breathing problems, malnutrition and gut damage, retinopathy of prematurity, early and late onset infections and brain damage which can lead to a spectrum of long-term neurological sequelae. [1,2]…