Undertaking a medical elective in Peru: a student’s perspective 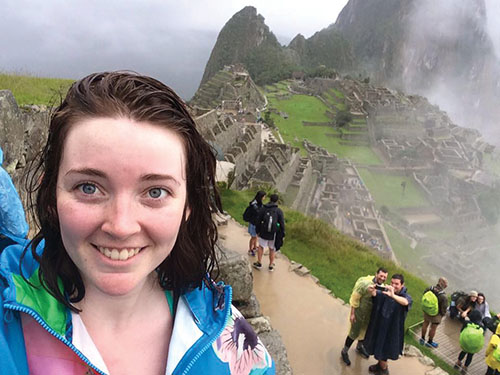 I chose to undertake a Work the World placement as I wanted to get a feel for how healthcare operates in countries that have less funding and fewer resources than Australia. Like many students, I had also been bitten by the travel bug. I wanted to get out and see the world. A Work the World placement allowed me to experience Peruvian medicine in a supported way, and meant I could observe and interact with healthcare delivery without feeling like I was stepping outside my role or acting above my qualifications, which was very important to me.

I had already organised to travel to the USA from Australia with family over Christmas and the New Year, so I decided it would be a good time to visit South America. I’ve always been interested in history, so I was attracted to Peru’s Incan and pre-Incan ruins, like Machu Picchu. I also liked the idea of gaining some new language skills while overseas.

I’m also interested in women’s health as a career path, and I think part of what makes care in Australia so effective is that we are very secular in our healthcare delivery. Latin America is predominantly Catholic, and their healthcare is very much influenced by their religion, especially when it comes to women’s health interventions like contraception and termination. I wanted to discover how these beliefs affect health outcomes for women.

When I arrived in Peru, I was both excited and nervous. My previous travels around South America had introduced me to new people and places, but my actual time in these countries was limited. This time, I was spending six weeks in one place!

The first 24 hours in Arequipa were great. Raul, part of the local Work the World team, met me at the airport and we took a taxi back to the house. Another student had also flown in that day and was waiting at the house when we arrived. A further five people from the US were due to arrive an hour later. All the students who had started their placements earlier were away on weekend trips, as our placements were from Monday to Friday. I was then taken on a tour of the house, shown our rooms, a map of the city, and how to get to our local shopping centre. After a while, the additional new students arrived, and we met Mama Julia and Angelo, our in-house chefs. We all had a quiet night getting to know each other.

As I had booked to do the Work the World intensive Spanish course, the following morning Raul caught the bus to Spanish school with us. There we met Maria, the wonderful, patient, and friendly language teacher. We spent the morning getting to grips with Spanish before Raul returned to take us into the centre of Arequipa on our city orientation. He took us out for lunch and on a walking tour to help us get to know the beautiful ‘White City’.

The house was fantastic; it had all the amenities you could want. I always felt safe, as there was always a Work the World staff member onsite. But most importantly, the friends I made at the house were the highlight of my trip. I can now say I have friends on almost every continent! Everyone got along very well, and we enjoyed doing lots of different activities together, from cooking classes and white water rafting, to weekend hiking trips, late-night karaoke, and dancing in the town square. Some friends left the house sooner than others, as we didn’t all stay for the same amount of time, but I’m so glad to have met all my former housemates, even the ones I only lived with for a week.

When arriving at the hospital for the first time, my immediate reaction was, “it looks like a convent!” The hospital was old, and there weren’t any segregated rooms. All the patients in the obstetrics and gynaecology ward were in beds next to each other, without separating walls, or even dividing curtains for privacy.

I spent a week in oncology and cancer prevention, where I learnt about cervical cancer screening methods from the midwives, as well as seeing cases of cervical cancer. Screening in Peru involves pap smears, but also regular screening with acetic acid under colposcopy, which is not standard practice in my state in Australia. They also do a lot of ‘freezing’ of cervical lesions, whereas in Australia we’re more likely to favour lower loop excision of the transformation zone (LLETZ) procedures for recurrent or high-grade lesions. Screening techniques and the Gardasil vaccine (also available in Peru) have largely decreased cervical cancer morbidity and mortality in Australia, and cases are detected early.

In Peru, many women never undergo screening, as they do not have the means to attend clinics for preventative care. As such, women commonly present late in the disease process. Unfortunately I saw multiple cases of cervical cancer so advanced that the cervical appearance would not feature on a grading scale in Australia, because it would never go so long undetected. This was fascinating as a scholar, but hard to observe on a personal level.

In some situations I’d help with things like moving the light for the midwife during a birth, or passing equipment. Under supervision in oncology, I was able to palpate some lumps, discuss X-rays with the consultant, and assist with a cervical biopsy.  The more enthusiasm you show, the more you’ll be able to do.

Being in the hospital in Peru made me realise how lucky Australia is to have things we consider disposable, like shoe covers and hair nets. Shoe covers are reused until they are falling apart in Arequipa. Everything is re-purposed there. In Arequipa, patients are required to pay for everything, right down to the sterile gloves the surgeon wears in the theatre, the needles required to cannulate and administer medicines and analgesia, even the saline drip!

We travelled almost every weekend, taking trips to Colca Canyon, Cuzco, Machu Picchu, Lake Titicaca, and the Nazca lines. Most things are just an overnight bus ride away. Colca Canyon was only three hours from the accommodation, and Lake Titicaca only six. The Work the World staff also gave us tips on how to organise cooking classes, chocolate-making sessions, and many other wonderful activities. What I loved most about Peru was the dancing and the music! Some of the food, like lomo saltado, was amazing. Other cuisine, such as Cuy (guinea pig), was not for me!

It’s too difficult to pick my favourite memory, but special mention has to go to our regular Taco Tuesday whole-house lunches at a restaurant near our house. And I will always remember the first time someone didn’t reply to me in English after I tried to order in Spanish — the ultimate ‘gringa’ compliment!

If you’re considering doing a Work the World placement in Peru, I say: do it! Prepare to have the time of your life. Everyone is so friendly and so happy to have you visiting their country. Oh, and make sure you haggle with the taxi drivers!

Work the World specialise in tailoring overseas healthcare electives and placements in Cambodia, Ghana, Tanzania, Peru, Nepal, Sri Lanka and the Philippines. Each of our destinations provide unique and exciting insight into healthcare in the developing world.