Timothy Yong Qun Leow Third Year Medicine in 2014 University of Western Sydney James Boon Kheng Khoo MBBS, FRCR, FAMS Head, Department of Oncologic Imaging National Cancer Centre Singapore
Timothy is a third year medical student at the University of Western Sydney. He is developing an interest in oncologic imaging, surgery, and medical education. Dr James Khoo is a senior consultant radiologist from the National Cancer Centre in Singapore. He is also Adjunct Associate Professor in the Duke-NUS Graduate School of Medicine and a member of the Specialist Training Committee for Diagnostic Radiology in Singapore.

Background: The adrenal glands (AG) are common sites for metastases in cancer patients. Identification of the AG on computed tomography (CT) is complicated by surrounding anatomical structures of similar radiological density, and may be difficult for non-radiologists.
Aim: This study compared the accuracy of two landmarks commonly used to identify the AG on CT.
Methods: 1,112 consecutive patients attending a comprehensive cancer centre received CT scans of their abdomen or chest over a one-month period. Scans were retrospectively analysed on a PACS workstation by a radiologist. The distance between the AG and two easily identifiable CT landmarks were measured. The landmarks included the upper pole of the kidneys (UP) and the coeliac axis (CA).
Results: CT scans were analysed to find the distance (using axial slices) between the AG and the landmarks. When they occurred on the same slice, the distance was given a value of zero. The CA and the right AG occurred at the same level in 65% of patients, and the CA and the left AG in 88% of patients. For the right UP, the right AG was at the same level in 42% of patients; and the left UP, at the same level as the left AG in 58% (p<0.001). The mean distance of the CA from the right and left AG was 4.45±7.14 mm and 1.15±3.59 mm respectively. The right and left UP were at a mean distance of 8.05±9.42 mm and -4.30±5.94 mm respectively from the AG. Paired t-test showed a significant correlational difference between the CA and UP as landmarks for the AG (p<0.0001). Conclusion: This study showed that the CA was closer to the AG than the UP. The CA may provide an accurate landmark for identification of the AG on CT scans. 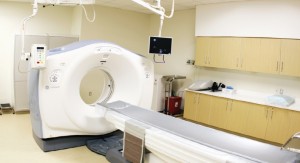 The adrenal glands (AG), locoregional lymph nodes, and the liver are common sites of metastases in cancer patients, with more than half of adult malignancies from renal cell carcinomas affecting the AG. [1-3] The majority of AG metastases are identified on computed tomography (CT) imaging. [1,4-8] Occasionally, one may encounter primary adrenal tumours such as adrenal adenomas and rarely, adrenal carcinomas. [3,6] It is important for clinicians to be able to accurately identify the AG in cancer patients to allow early identification and subsequent management of metastases. [9-12] As there are often delays in the time for CT scans to be assessed by a radiologist, early diagnosis of adrenal metastases by physicians may be of benefit in terms of earlier treatment and cost savings. [4,13] Furthermore, physicians who are able to quickly identify adrenal lesions on CT and provide detailed information to their patients in clinic may aid their patients in the understanding of their illness. This may potentially improve treatment outcomes, especially for patients with metastatic cancer. [13-16]
Identification of the AG on CT can be difficult for a number of reasons. Firstly, surrounding anatomical structures can complicate the diagnosis of adrenal lesions by superimposing upon the AG, or mimicking an adrenal mass (pseudotumour). [1-4,7] Secondly, the AG may cover the upper pole of the kidneys (UP) or be pressed up against the crus of the diaphragm. [17] Thirdly, the AG may move with respiration, making them more difficult to identify without a stable landmark. [9,18,19] Finally, a paucity of intra-abdominal fat can hinder identification of the AG. Generally, the right AG is easier to identify than the left AG owing to its different anatomy and surrounding structures. [20]
There is limited research available to compare the different methods for identifying the AG. [7,12] Known methods use different landmarks: most commonly the UP and possibly the coeliac axis (CA). [18,21] These landmarks are used to aid in the identification of the AG, and are especially useful for medical professionals not trained in cross-sectional radiography. [1,12] While the UP are frequently used landmarks, [18,21] the CA, a major branch of the abdominal aorta that gives rise to the hepatic and gastric arteries, is suggested to be an accurate landmark as it is present in most patients. [22,23] Although the hepatic and gastric branches move with respiration, the origin of the CA (which comes off the aorta) demonstrates minimal movement with respiration. It is currently unclear whether the CA is an accurate landmark for identification of the AG. Accordingly, we conducted a cross-sectional study with the aim of comparing the distances of the CA and UP from the AG on CT scans.

Consecutive patients (n=1,112) attending a comprehensive cancer centre over a one-month period underwent CT scans of their abdomen or chest as part of their routine medical management. CT images and clinical data were reviewed retrospectively in accordance with Institutional Review Board (IRB) and ethics approval. Patients were excluded if they had medical conditions that were thought to significantly alter the location of the AG (n=75). This included patients with surgery adjacent to the AG (n=9), splenomegaly (n=1), renal lesions (n=27), massive adrenal nodules (n=7) and massive adrenal metastases (n=31). Patients who had not received IV contrast (n=74) were not excluded from the study.

Patients were scanned on a LightSpeed © 64-Slice VCT CT system, manufactured by GE Healthcare (Little Chalfont, Buckinghamshire, UK). Contiguous axial 0.6 mm slices were obtained and the images were reconstructed at 5 mm intervals for viewing on a Carestream PACS v10.2 workstation (Carestream Health, Rochester, NY, USA). All images were reviewed by a radiologist with over 20 years of experience in cross-sectional imaging.
Two methods were studied to determine the more effective method of land marking and identifying the AG. The first and more commonly known method involved the identification of the UP, following it slice by slice superiorly until reaching the mid-level of the AG. The second method employed the CA, as the landmark (Figure 1.A). [22] For this study, the mid-level of the AG was identified, and its position was noted in relation to the upper margin of the respective UP and to the CA. Distances between the AG and landmarks were calculated by counting the number of axial slices between the structures and converting this to millimetres (craniocaudal distance). Each CT DICOM had a slice thickness of 5 mm (Table 1). A distance of 0 mm indicated that the landmark and AG were present on the same slice. Positive values indicated the AG were superior to the landmark and negative values indicated that the AG were inferior to the landmark.

Results were analysed using IBM SPSS ® version 20 (Armonk, NY, USA). The distance between the AG and the defined landmarks were compared using paired t-tests. A p-value of <0.05 was considered to be statistically significant. Results

In total there were 1,037 patients with a median age of 60 years (Inter-quartile range: 52-68 years) and male to female ratio of 527:510. Twelve (1.2%) of the patients in the study had non-massive adrenal lesions and 74 (7.1%) of the patients had not received IV contrast. The images without IV contrast were scrutinised in greater depth because it was more difficult to distinguish the CA on non-contrast CT, but it did not markedly affect the identification of normal AG. [12,21,24] The results below provide an overview of the relational distance between AG and landmarks, calculated by slice levels that were numbered and converted to millimetres (Table 1). Graphical representation of the mean distances of the AG to the landmarks are shown in Figure 2. Statistical assessment of differences between landmarks are shown in Table 2 and Figure 3.

The main finding of this study was that the AG could be more accurately identified on CT images when the CA was used as the reference landmark as opposed to the conventional method of using the UP as a landmark. The distance between the AG and the CA was significantly shorter than the distance between the AG and the UP. Furthermore, the CA was more likely to be located on the same axial slice as the left and right AG than the UP. This study also showed that the CA was a less variable landmark than the UP, with smaller interquartile ranges. These findings support the belief that the CA does not move with respiration, providing one explanation why the CA appeared to be a more accurate landmark.

Anatomical landmarks play an important role in medical imaging. Identifying a landmark proximal to the target organ can reduce distance-related errors that may occur when analysing CT images. [25] As Gunderman [26] said, “By far the most important role of imaging in the evaluation of the AG lies in the detection, characterization, and staging of adrenal tumours.” There are a limited number of studies available that explore different methods of identifying the AG, however, many studies have been undertaken assessing other radiological landmarks in the body. [7,12,27-31] For a landmark to be accurate, it must include the following general characteristics: Firstly, having a close measurable distance relationship to the target structure (preferably less than 10 mm). Secondly, the stability of the landmark should allow clinicians to accurately estimate the location of the target structure, and avoid the over- or underestimation of the target structure’s location from the landmark. [25,28-30] Thirdly, pattern approach CT imaging interpretation requires the more accurate landmark to be easily recognizable to the viewer. [28-32]

This study has several limitations. First, data was gathered from a sample of cancer patients, which is a subset of all patients that receive CT scans of the abdomen. Consequently, the results of this study may not be a true representation of the general population. Second, IV contrast was not administered to all 1,037 patients included and enhanced images may have allowed for easier identification of the CA. [12,21,24] Finally, CT images were analysed by an experienced academic radiologist. The findings may have been different had they been analysed by junior doctors or other non-radiologist physicians. This study could be improved by including a number of non-radiology clinicians as the primary readers. The data described here was from a cancer centre in Southeast Asia only. This study could be further improved with an international patient pool allowing comparison of different ethnic groups. Patients with massive renal and adrenal pathology, such as adrenal metastases, were excluded from the study. A larger study is required to investigate the impact of such pathology on the identification of AG on CT. Further research could be done to determine the possibility of reducing the time taken to identify and diagnose the status of the AG, when using the CA as a landmark. The technique of using the CA as a landmark may also be applied to the identification of primary or secondary carcinoma, and further study could aid with the locating and identification of abnormal AG.

The CA is an easily identifiable landmark that is closer to the adrenal gland than the UP. This landmark may be applied by clinicians to facilitate timely detection of the AG on CT scans.

Professor John Morley and Associate Professor Noel Young for their assistance in proof-reading the abstract. Eric Martin and Diane Premnath for their patience and kindness in reviewing the paper. Jeremiah Schmidt for his aid with the statistics. Michelle Ng, Sophie Kobuch, Chatwin Lee, Lisa Leow, Corinne Fulford, Simon Chow, and Karlene Zhu for their patience in proof-reading the paper.