Seasonal influenza vaccination in antenatal women: Views of health care workers and barriers in the delivery of the vaccine

Surabhi Khosla
Fourth Year Medicine (Undergraduate)
James Cook University
Surabhi undertook this research project as part of the General Practice Student Network First Wave Academic Scholarship. She has a growing interest in maternal health research and infectious disease, and has been involved in a couple of research projects in the fields of Primary Health Care and Vascular Biology. In second year, she received the Norway Bursary and did a four week rural placement in Northern Norway. Other than research, she enjoys working as the President of the Rural Health Club - RHINO and attending conferences around Australia. 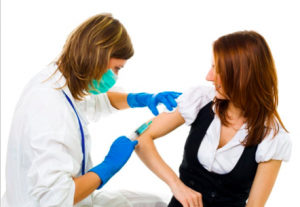 Seasonal influenza results in annual epidemics of respiratory diseases. Influenza epidemics and pandemics increase hospitalisation rates and mortality, particularly among the elderly and high risk patients with underlying conditions. [1-3] All pregnant women are at an increased risk of developing influenza due to progressive suppression of Th1- cell-mediated immunity and other physiological changes that cause culmination of morbidity towards the end of pregnancy. [4-7]

Annual influenza vaccination is the most effective method for preventing influenza virus infection and its complications [8] Trivalent inactivated influenza vaccine (TIV) has been proven safe and is recommended for person aged ≥6 months, including those with high- risk conditions such as pregnancy. [8-10] A randomised controlled study in Bangladesh demonstrated that TIV administered in the third trimester of pregnancy resulted in reduced maternal respiratory illness and reduced infant influenza infection. [11, 12] Another randomised controlled trial has shown that influenza immunisation of pregnant women reduced influenza-like illness by more than 30% in both the mothers and the infants, and reduced laboratory-proven influenza infections in 0- to 6-month-old infants by 63%. [13]

A recent literature review performed by Skowronski et al. (2009) found that TIV is warranted to protect women against influenza- related hospitalisation during the second half of normal pregnancy, but evidence is otherwise insufficient to recommend routine TIV as the standard of practice for all healthy women beginning in early pregnancy. [6] Similarly, another review looked at the evidence for the risks of influenza and the risks and benefits of seasonal influenza vaccination in pregnancy and concluded that data on influenza vaccine safety in pregnancy is inadequate. [19] However, based on the available literature, there was no evidence of serious side effects in women or their infants, including no indication of harm from vaccination in the first trimester. [19]

We aim to review the literature published on the delivery and uptake of influenza vaccination during pregnancy and identify the reasons for low adherence to guidelines. The review will increase our understanding of how the use of the influenza vaccination is perceived by health care providers and the pregnant women.

Several published studies have revealed data supporting deficits in the knowledge of health care providers regarding the significance of the vaccine and the national guidelines, hence suggesting a low rate of vaccine recommendation and uptake by pregnant women. [20] A research project in 2006 performed a cross-sectional study of the knowledge and attitudes towards the influenza vaccination in pregnancy amongst all levels of health care workers (HCW’s) working at the Department for Health of Women and Children at University of Milan, Italy. [20] The strength of this study was that it included 740 HCWs representing 48.4% working in obstetrics/gynaecology, 17.6% in neonatology and 34% in paediatrics, of whom 282 (38.1%) were physicians, 319 (43.1%) nurses, and 139 (18.8%) paramedics (health aides/healthcare assistants). The respondents were given a pilot-tested questionnaire about their perception of the seriousness of influenza, their general knowledge of influenza recommendations and preventive measures, and their personal use of influenza vaccination; which was to be self-completed in 20 mins in an isolated room. Descriptive analysis of the 707 (95.6%) HCWs that completed the questionnaire revealed that the majority (83.6%) of HCW’s in obstetrics/gynaecology never recommended the influenza vaccination to healthy pregnant women. Esposito et al. (2007) highlighted that only a small number of nurses and paramedics, from each speciality, regarded influenza as serious in comparison to the physicians. [20] Another study investigating practices of the Midwives found that only 37% believed that influenza vaccine is effective and 22% believed that the vaccine was a greater risk than influenza. [21] The results from these studies clearly indicate deficiencies in the general knowledge of influenza and its prevention amongst health care staff.

In contrast, a study by Wu et al. (2006) suggested unusually high vaccination uptake rate of the fellows from the American College of Obstetricians and Gynaecologists (ACOG) who live and practice in Nashville, Tennessee. [22] The survey focussed on physician knowledge, practices, and opinions regarding influenza vaccination of pregnant women. Results revealed that 89% of practitioners responded that they routinely recommend the vaccine to pregnant women and 73% actually administered the vaccination to pregnant and postpartum women. [21] Sixty-two percent responded that the earliest administration of the vaccine should be the second trimester, while 32% reported that it should be offered in the first trimester. Interestingly, 6% believed that it should not be delivered at all during the pregnancy. Despite the national recommendation to administer the vaccination routinely to all pregnant women, [4] more than half of the obstetricians preferred to withhold it until second trimester due to concerns regarding vaccine safety, association with spontaneous abortion and possibility of disruption in embryogenesis. [22] Despite the high uptake rate identified by the respondents, there are a few major limitations in this study. First, the researchers excluded the family physicians and midwives practicing obstetrics in their survey, which prevents a true representation of the sample population. Second, the vaccination rates were identified by the practitioners and not validated, which increases the likelihood of personal bias by the practitioners.

It is evident that HCWs attending to pregnant women and children have limited and frequently incorrect beliefs concerning influenza and its prevention. [20,23] A recent study by Tong et al. (2008) demonstrated that only 40% of the health care providers at the three hospitals studied in Toronto were aware of the high-risk status of pregnant women and only 65% were aware of the NACI recommendations. [23] Furthermore, obstetricians were less likely than family physicians to indicate that it was their responsibility to discuss, recommend, or provide influenza vaccination. [23] Tong et al. (2008) also demonstrated that high levels of provider knowledge about influenza and maternal vaccination, positive attitudes towards influenza vaccination, increased age, being a family physician, and having been vaccinated against influenza, were associated with recommending influenza vaccine to pregnant women. [23] This data is also supported by Wu et al. and Espostio et al.

In 2001, Silverman et al. (2001) concluded that physicians were more likely to recommend vaccine if they were aware of current ‘Centers for Disease Prevention and Control’ guidelines, gave vaccinations in their offices and had been vaccinated against influenza themselves. [24] Similarly, Lee et al. (2005) showed that midwives who received the immunisation themselves and firmly believed in its benefits, were more likely to offer it to pregnant women. [21] Wallis et al. (2006) conducted a multisite interventional study involving educational sessions with the physicians and the use of “Think Flu Vaccine” notes on active obstetric charts, to illustrate a fifteen fold increase in the rate of influenza vaccinations in pregnancy. [25] This study also demonstrated that increase in uptake was greater in family practices versus obstetric practices, and furthermore increased in small practices as opposed to large practices.

Overall, the literature here is derived mostly from American and Canadian studies as there is no data available for Australia. Existing data suggest that there is a significant lack of understanding regarding influenza vaccine safety, benefits and recommendations amongst the HCW’s. [20-27] These factors may lead to wrong assumptions and infrequent vaccine delivery.

Barriers in delivering the influenza vaccinations to pregnant women

Aside from the gaps in the health care provider’s understanding of vaccine safety and national guidelines, several other barriers in delivering the influenza vaccine to pregnant women have been identified. A study published in 2009, based on CDC analysis of data from the Pregnancy Risk Assessment and Monitoring System from Georgia and Rhode Island over the period of 2004-2007, showed that the most common reasons for not receiving the vaccination were, “I don’t normally get the flu vaccination” (69.4%), and “my physician did not mention anything about a flu vaccine during my pregnancy” (44.5%). [28] Lack of maternal knowledge about the benefits of the influenza vaccination has also been demonstrated by Yudin et al. (2009), who conducted a cross-sectional in hospital survey of 100 postpartum women during the influenza season in downtown Toronto. [29] This study concluded that 90% of women incorrectly believed that pregnant women have the same risk of complications as non-pregnant women and 80% incorrectly believed that the vaccine may cause birth defects. [29]. Another study highlighted that 48% of physician listed patient refusal as a barrier for administering the vaccine. [22] These results were supported by Wallis et al. (2006), which focused on using simple interventions such as chart reminders to surmount the gaps in knowledge of women. [25] ‘Missed opportunities’ by obstetricians and family physicians to offer the vaccination have been suggested as a major obstacle in the delivery of the influenza vaccination during pregnancy. [14,23,25,28]

This is supported by several studies that have shown that the vaccine is comparatively cost-effective when considering the financial burden of influenza related morbidity. [31] A 2006 study based on decision analysis modelling revealed that vaccination rate of 100% in pregnant women would save approximately 50 dollars per woman, resulting in a net gain of approximately 45 quality-adjusted hours relative to providing supportive care alone in the pregnant population. [32] Beigi et al. (2009) demonstrated that maternal influenza vaccination using either the single- or 2-dose strategy is a cost-effective approach when influenza prevalence is 7.5% and influenza-attributable mortality is 1.05%. [32] As the prevalence of influenza and/or the severity of the outbreak increases the incremental value of vaccination also increases. [32] Moreover, a study in 2006 has proven the cost-effectiveness to the health sector of the single dose influenza vaccination for influenza like illness. [31] Therefore, patient education about the relative cost- effectiveness of the vaccine and adequate reimbursement by the government is required to alleviate this barrier in other nations but not in Australia where the vaccination is free for all pregnant women.

Lack of vaccine storage facilities in physician offices is an important barrier preventing the recommendation and uptake of the vaccine by pregnant women. [23,33] A recent study monitoring the immunisation practices amongst practicing obstetricians found that less than 30% store influenza vaccine in their office. [18] One study showed acceptance rates of influenza vaccine of 71% of 448 eligible pregnant women who were offered the influenza vaccine at routine prenatal visit due to the availability of storage facilities at the practice, suggesting that the uptake of vaccination can be increased by simply overcoming the logistical and organisational barriers such as vaccine storage, inadequate reimbursement and patient education. [34]

From the limited data available, it is clear that there are is a variable level of knowledge of influenza and its prevention amongst HCWs. There is also and a general lack of awareness of the national guidelines in their countries. However, there is no literature for Australia to compare with other nations. There is some debate regarding the trimester in which the vaccine should be administered. There is further lack of clarity in terms of who is responsible for the discussion and delivery of the vaccine – the general practitioner or the obstetrician. These factors contribute to a lack of discussion of vaccine use and amplify the amount of ‘missed opportunities.’

Lack of maternal knowledge about the safety of the vaccine and its benefits is also a barrier that must be overcome by the HCW through facilitating an effective discussion about the vaccine. Since the vaccine has been rendered free in Australia, cost should not prevent vaccination. Regular supply and storage of vaccines especially in remote towns of Australia is likely to be a logistical challenge.

There is limited Australian literature exploring the uptake of influenza vaccine in pregnancy and the contributing factors such as the knowledge, attitude and opinion of HCWs, maternal knowledge of the vaccine and logistical barriers. A reasonable first step would be to determine the rates of uptake and prevalence of influenza vaccination in antenatal women in Australia.