Samantha Bobba
Fourth Year Medicine (Undergraduate)
University of New South Wales
Samantha is a fourth year medical student at the University of New South Wales. She is currently completing an honours year, undertaking research in the field of limbal stem cells. She serves as the undergraduate representative on the UNSW University Council and as the ILP/Honours representative on the UNSW Medical Society. She is a keen traveller, bungy-jumping novice and appreciates the quirky side of life.

Obesity is a major concern in Australia, with 62.8% of the adult population termed overweight (35.3%) or obese (27.5%). [1] Multiple factors contribute to these rising statistics, and whilst fast food companies undeniably contribute to obesity, defining the exact role that they play and their responsibility remains controversial. Whilst difficult to numerically define, previous studies have offered various definitions of fast food, broadly defining it as food purchased from cafeterias, restaurants and ‘big brand’ companies (such as McDonalds) that are high-calorie and low in nutritional value. [2-4] Food produced in restaurants, for example, is at least 20% higher in fat-content than the home-cooked equivalent. [5] It has now been over a decade since the infamously termed ‘McLawsuit,’ in which a group of overweight children in America filed legal action against the McDonalds corporation for their obesity-related health problems, first bringing the issue of corporate responsibility to a head. [6] Increasingly, now, trends are towards increasing regulation of the fast food industry, with recent debate over a fat tax in Australia, [7] and New South Wales enforcing nutrition labelling of fast food products. [8] The obesity epidemic continues to contribute to the morbidity and health expenditure of many developed countries, with minimal resolution on the role that fast food companies should play in tackling it. 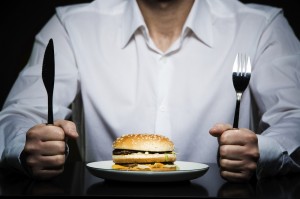 Obesity in Australia: The contribution of fast food companies

The complex array of factors contributing to obesity makes the issue of responsibility a difficult one. [9] Australia’s obesogenic environment comprises multiple factors, such as increasingly sedentary lifestyles, poor education regarding nutrition and the accessibility of fast food. [10] In this respect, fast food companies, government and the wider community are all stakeholders with differing degrees of responsibility.

Fast food companies are considered a key stakeholder in contributing to Australia’s obesogenic environment. This is attributed to factors such as their large portion sizes, and marketing ploys that intensively promote the accessibility of unhealthy snack foods and target vulnerable groups such as low-income earners and children. [11] These factors make it difficult for consumers to make informed choices and resist unhealthy options, ultimately contributing to overeating and excess body weight. [12] Establishing a causal link between fast food companies and obesity is difficult due to the complexity of the relationship. An analysis by Chou, Rashad and Grossman (2005) indicated that a ban on fast food advertising would reduce the number of overweight children by 10% in the 3-11 year age group, and by 12% amongst 12-18 year olds, suggesting a causal component to the relationship in this vulnerable population group. [13] Accessibility of fast food outlets is also a contributing factor, with Maddock and colleagues (2004) showing that there is a significant correlation between proximity to fast food restaurants and obesity. [14] Furthermore, ever-increasing portion sizes also provide evidence for the influence of fast food companies on obesity; with Young and Nestle (2002) noting that portion sizes have paralleled the increase in average body weight. [15] Whilst some claim that fast food companies simply respond to consumer desires, and that the average consumer is well aware of the obesity epidemic, it can be argued that they are still partly responsible by providing and promoting this supply.

Corporate Social Responsibility (CSR) is a form of self-regulation that corporations integrate into their business model. [16] It involves taking responsibility for the impact of the company’s decisions on society and the environment. [17] Guler and Crowther (2010) further describe CSR as honouring the triple bottom line of people, planet and profit rather than solely focusing on profit maximisation. [18]

However, as well as these incentives, firms also face challenges in establishing CSR policies. Some economists claim that CSR distracts from the role of business, which is to maximise profit. [24] The financial costs of introducing CSR policies may also be barriers for firms, particularly small businesses that lack the required resources. [20] Moreover, CSR does not necessarily equate to positive consumer perceptions, as the credibility of corporations is often doubted. [21] For example, partnerships between KFC and the McGraw foundation, McDonalds and WeightWatchers, and Nestle and Jenny Craig have been criticised as marketing ploys, termed ‘weightwashing’ by the Obesity Policy Coalition. [25]

In the context of Australia’s obesity epidemic, CSR policies in the food industry may have varied impacts. Fast food companies, at a time of increasing obesity rates, may see an opportunity in utilising health policy to establish consumer goodwill and brand value, creating a profit-driven incentive to engage in obesity prevention. Self-motivation in CSR policy construction could, however, be detrimental to health prevention, with, for example, fast food companies shifting blame from ‘foods’ to ‘sedentarism’ in their marketing, rather than altering the quality of their products. [20] Additionally, as a defensive response to avoid government regulation, the food industry has created an opening for itself in a health and sports promotion role, which, whilst contributing to preventative health programs in the short-term, may in time detract from the conventional governmental role in public health, devolving government of some responsibility without effectively satisfying community needs.

Despite its challenges, the potential benefits of CSR and the rise of privatisation and globalisation make self-regulation in the food industry an important, and perhaps inevitable, approach to consider in tackling obesity. [25]

In light of steadily increasing obesity rates in many Western societies, a number of governments have implemented policies to reduce the impact of fast food companies in promoting overeating. [26,27] Outlined below are four categories of legislative change and their implications.

Fast food advertising can send misleading messages to consumers, particularly those less informed. [28] Ethically, from a communitarian perspective, restricting advertising may denormalise fast food by making it less ubiquitous, helping change social attitudes, which is key to combating obesity. [29] Conversely, restrictions on advertising limit choice by making consumers less aware of their options, contradicting the principle of autonomy. Whilst it could be said that advertising of healthy foods continues to provide this autonomy, critics argue that fast food is not harmful in moderation and thus consumers should be able to make an informed decision of their purchases. Similarly, in alignment with narrative ethics, individuals have different approaches to eating, which may be compromised by eliminating the information delivered by fast food advertising. [30,31] It is important to note, however, that many of these concerns assume advertising delivers accurate information, which is often not the case. Critics also claim that restricting advertising is ineffective, as there are more important factors contributing to obesity. In addition, there are concerns about how the distinction between healthy and unhealthy foods would be made and the rights of companies to market their goods. [32]

Examples of restrictions on fast food advertising include banning fast food company sponsorship of sporting events and celebrity endorsement of unhealthy foods, as well as banning advertising that targets children, a population group particularly susceptible to marketing ploys. In regards to this, banning advertising to children in prime-time hours has already been successfully achieved in a number of countries. Quebec, for example, has had a 32-year ban on fast food advertising to children, leading to an estimated US$88 million reduction in fast food expenditure. [33] Australia has been moving towards restricting fast food advertising that targets children, with the Australian Food and Grocery Council resolving to not advertise fast foods in programs where at least 35% of the audience are children. [34] However, analyses of the difficulties of self-regulation in the food industry indicate that its effectiveness depends on the rate of engagement by individual companies and is not sufficient to adequately protect consumers. [35,36]

A ‘fat tax’ would involve taxing foods or beverages high in fat content (other ‘unhealthy’ components such as sugar and salt could also be taxed). It aims to discourage consumers from unhealthy products and offset their health costs with the tax revenue generated. [37] Subsidies for healthy food options are considered less practical with a greater cost-burden for taxpayers. Critics argue that a ‘fat tax’ would disproportionately affect low socio-economic consumers, unless healthy alternatives are made cheaper. [38] Some argue that obese individuals are also less responsive to increased prices than consumers of average BMI, reducing the effectiveness of a tax. [39] A ‘fat tax’ could even exacerbate health problems – a tax only on saturated fat, for example, may increase salt intake, which increases cardiovascular risk. [38] Denmark was the first country to introduce a tax on fat in 2011; however, it has since resolved to repeal the legislation, claiming that it increased consumer prices, increased corporate administration costs, and damaged Danish employment prospects without changing Danish eating habits, reducing the likelihood of this approach being trialled by other countries, including Australia. [40] It should be noted, however, that country-specific differences may have contributed to its lack of success.  These include the ability of the Danish population to travel to neighbouring countries to maintain their eating habits despite the government tax, which would not be feasible in Australia. Alternatively, the government could consider combining subsidies for healthy food options with a ‘fat tax,’ as this approach would be more acceptable to the public than a tax alone, and also yield a lower cost-burden for taxpayers than subsidies alone.

Nutrition labelling aims to ensure consumers understand the nutritious value of foods. In Australia, all food labels must abide by the national Food Standards Code. [41] Options to simplify food labelling include traffic light food labelling, which codes foods red, yellow or green based on their fat, sugar and salt content. [42] Another option is health warnings on unhealthy foods to deter consumption. [43] Australia-wide, a new star rating system for packaged foods has been developed by a working group which included industry and public health experts; as of June 2013, this has been approved by state and federal governments. [44] The scale will rate foods from half-star to five stars based on nutritional value, despite concerns raised by the Australian Food and Grocery Council over the cost to manufacturers and how nutritional value would be determined. Sacks et al. (2009) argues, however, that there is insufficient evidence to suggest that food labelling would reduce obesity. [45] Critics also argue that more restrictive practices, such as health warnings, are excessive and impractical considering the ubiquity of high fat foods. [46]

Easy accessibility of unhealthy foods makes them difficult to resist. Making fast food less accessible again denormalises it, helping change social attitudes. This is supported by studies showing that obesity rates are higher in areas with an increased number of fast food outlets. [14] Zoning laws have been suggested as a policy tool to limit the accessibility of fast food, with findings suggesting success in reducing alcohol-related problems. [47] Other approaches to restrict access include removing fast food from high accessibility shelves in supermarkets, banning fast food vending machines and banning fast food from school canteens. Victoria, for example, has imposed strict canteen rules restricting the sale of fast food to twice a term. [48] However, critics argue that restricting the accessibility of fast food may undermine consumer autonomy and choice, impinge on the legal rights of companies to market their goods, and could also be a precedent for government intervention in other areas. [49]

Whilst it is difficult to define the extent of the role that fast food companies play, there is no doubt that they significantly contribute to Australia’s obesity epidemic through their large portion sizes, low quality food, extensive fast food advertising and high accessibility. Ultimately, combating obesity will require a multi-faceted approach that denormalises unhealthy foods – a process that requires both consumers and government to take a role in regulating the quality, marketing practices and accessibility of unhealthy products produced by the food industry.