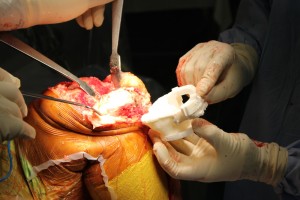 Australia is faced with an ageing population and is bracing for the significant health challenges of this changing demographic. Individuals born during the post-war population boom of the late 1940s are now progressing into the over 65 age bracket, which has led to the emergence of a number of unique health and economic challenges. While the majority of older adult Australians continue to live at home, caring for the ageing population will inevitably require additional healthcare resources.

The full challenge of the ageing population will be faced by today’s generation of medical students. The future health system will not simply need to deliver more of the same services, but do so in a more efficient manner, making use of the most advanced technologies in a cost and time-efficient manner. The system will need to adapt to the complex needs of the elderly patient, optimising coordinated care between primary and tertiary health care facilities.

Currently, within the population of Australia some 15% (3.1 million) are affected by arthritis, with osteoarthritis being the leading cause. [1] Being a degenerative condition, the incidence of osteoarthritis increases with age, and accounts for the primary cause of approximately 97% of total knee arthroplasties (TKAs) performed in Australia. [3] The dramatic increase in the population aged over 65 represents an immense increase in the numbers of individuals at risk of osteoarthritic knee changes. Given the inevitable wave in those requiring joint arthroplasty, are we fully prepared for this expected number?

In 2011, a total of 40,470 TKAs were performed in Australia. [3] This represents an increase of 5.7% on the previous year and a further increase of 83.7% since 2003. [3] There is also a growing trend of patients requiring TKAs at an earlier age, further adding to the workload of surgeons and hospitals. [3] Given the growing demand and expected increase in the patient population, there is a clear impetus to evaluate novel surgical approaches used in total knee arthroplasties.

Patient specific total knee arthroplasties (PSTKA) are one possible solution to this growing demand. They provide an anatomically individualised approach to surgery based on pre-operative computer tomography (CT) or magnetic resonance imaging (MRI). Following imaging, a patient specific cutting block is manufactured from a digital 3D reconstruction of the patient’s joint. The cutting blocks are then used to guide intra-operative bone resection, followed by installation of a pre-sized prosthesis. [4]

After initial assessment, the surgeon will decide upon the use of CT or MRI, based on personal preference. The scans are sent electronically to a manufacturing company of choice, where they are converted into a digital 3D reconstruction of the patient’s anatomy using computer-aided design. At this stage, the surgeon will review the digital reconstruction and finalise coronal and rotational alignment parameters. The review process allows the surgeon to make changes prior to manufacture, specific to the patient’s functional requirements. Following this process, the custom designed disposable cutting blocks are then authorised for fabrication. Intra-operatively, the cutting blocks are attached to the distal femur and proximal tibia to accurately guide bone resection prior to the insertion of a customised prosthesis. [4] The primary advantage of the fabricated cutting blocks is their ability to accurately guide the quantity of bone resection, maintaining the desired coronal and rotational alignment for optimal prosthesis placement. [4]

Companies such as Medacta in Sydney, NSW, currently offer this service. From the time of the initial scans, the patient specific cutting blocks can be reviewed, and manufactured ready for use in as little as three weeks. Review prior to manufacture is a fully online process, allowing the surgeon to log in via any computer and make the necessary changes before authorising the cutting blocks for production. The time taken by the surgeon to review the specifications can range from 5-15 minutes, depending on the complexity of patient anatomy and individual skills. [5]

By finalising operative procedures prior to surgery, there is less demand for intra-operative decision making by the surgeon, further streamlining the process. [6] The individualised planning allows finalisation of prosthesis size, position and alignment prior to the first incision being made. [4] While this process may require additional out-of-operating commitments by the surgeon, overall it may lead to a reduction in the total theatre time per patient.

Manufacturers of this technology propose a number of positive outcomes. Advantages include reduced operative time when compared to conventional techniques, [4] pre-operative sizing of prosthesis, reduced bone resection [6] and optimal alignment of the tibia and femur post-surgery. [7-9] This method also does not require violation of the intramedullary canal as used in some conventional TKA methods. [4] Additional costing benefits may also be found in a reduction in the number of instrument trays required for surgery, leading to reduced setup time and sterilisation cost. Conventional methods require an average of 7.3 intra-operative instrument trays, compared to 2.5 used in PSTKA (p <0.001). [14]

A sensitive indicator of the success of TKA is prosthesis survival, measured in years post surgery. This idea is supported in research by Berend et al. (2004), who demonstrated that a tibial varus deformity greater than three degrees was associated with implant failure at rates 17 times greater than seen in patients with tibial deviation of less than three degrees post surgery. [10] In the literature, alignment of the tibia on the femur within three degrees in the coronal plane remains a consistent indicator of surgical outcome. [10-12]

A study conducted by Ng et al. (2012) examined the post-operative alignment outcome in 569 PSTKA, compared to 155 TKAs performed using intra- and extra-medullar alignment techniques. Of the patients undergoing PSTKA, only 9% had alignment outside of three degrees post-operatively, when compared to 22% using conventional methods (p=0.02). [11] While there is evidence in the literature that alignment outcome in PSTKA are comparable to those achieved with computer assisted surgery (CAS), utilisation of CAS in America remains low due to the cost of the technology, with only 3% percent of TKA being performed using CAS alignment systems. [12]

Of particular interest to both surgeons and hospitals is the proposed reduction in surgical time offered by PSTKA. Research conducted by Hamilton et al. (2013) compared intra-operative time of 52 patients undergoing PSTKA, and those undergoing conventional methods. [14] That study demonstrated no reduction in surgical time offered by those receiving PSTKA. Of interest, the study noted the fact that the surgeon who performed all 52 of the cases had vast experience using conventional methods prior to the study. This included performing over 1,500 conventional TKAs compared to 20 PSKTA. [14] With this significant limitation in mind, there is clear impetus for further evaluation into the possible time efficacy of PSTKA when performed by surgeons equally skilled in both techniques.

In further research assessing the time efficacy of PSTKA, Nunley et al. (2012) reported a positive trend in reducing tourniquet time from 61.0 ± 15.0 minutes in the conventional group, compared to 56.2 ± 15.1 minutes in the PSTKA group (p=0.09).  Alternately, another recent study demonstrated a significant reduction in total operating theatre time from 137.2 ± 33.6 in the conventional group, compared to 125.1± 22.7 in the PSTKA group (p=0.028). [6] While some of these results are not statistically significant, they highlight the need for continued evaluation of PSTKA compared to alternative methods of TKA. Evaluation of the current research reveals an optimistic view of PSTKA in its ability to reduce intra-operative time. [15] With any new approach to surgery, practice is needed to hone the skills essential for efficiency.

Possible drawbacks highlighted in current literature include the additional workload of pre-operative imaging. Specifically, the cost of pre-operative CT or MRI remains a consideration. While the scans do not require interpretation by a radiologist, saving both time and money, the cost of a MRI ranges from A$500 to A$1000 depending on the institution. Additionally, in the use of CT imaging there is dosing of ionizing radiation, which must be considered. [4]

In addition to patient outcomes, the cost involved in adopting a new approach to surgery must always be considered. Currently, PSTKA is not cost-effective on a case-by-case basis, when compared to conventional TKA. PSKTA is, however, more cost effective when compared to computer-assisted TKA surgery. [13]  Interestingly, the authors noted a reduction of 28 minutes per case of operating room time in PSTKAs, and this was not factored into the costing analysis. At an institutional level, perhaps an increased case turnover in the operating room will prove cost effective when compared to alternative techniques. [13]

At this point in time, further research needs to be conducted into the durability and longevity of PSTKA. While this requires extended follow-up and evaluation of records, survival rates of implants may become particularly important in light of the growing trend toward a younger patient population. [3] Currently, TKAs are being performed at an earlier age due to increasing levels of obesity, active lifestyles and increasing life expectancy. [3] With this younger population group comes the need to provide patients with prostheses that will last, reducing the need for subsequent revision. Importantly, with aseptic loosening of prosthesis being shown as the most common cause of premature failure, perhaps a customised approach to initial surgery may demonstrate improved longevity at follow-up. [9]

As in any new area of research, there is a particular need for larger trials with extended follow-up. The purpose of this article is not to condone the widespread use of PSTKA, but rather to illustrate the importance of technology and the continued search for improvement. As doctors, it is essential to always question current methods of practice and seek to refine technique, finding improvements where possible. PSTKA makes use of some of the most advanced imaging and engineering techniques currently available, and provides an innovative approach to knee surgery. There is no doubt PSTKA offers an exciting alternative to conventional surgical methods, meshing surgical expertise with advanced engineering technologies. In the future, could the 3D printing of patient specific prostheses take this technology to the next level?