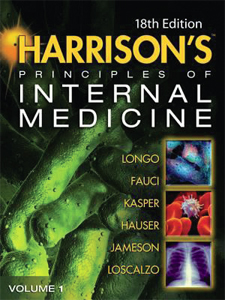 So a review of this text has been done before, not of Harrison’s Principles of Internal Medicine (Harrison’s) in isolation but a comparison to William Osler’s The Principles and Practice of Medicine. [1] The latest edition of Harrison’s has been available since July 2011, and as an avid user of the online version of Harrison’s (via AccessMedicine™ through the University’s library website). The book is found in two tomes, a whopping 4012 pages in total. I have a thing for being able to physically hold a book and read it, hence not relying on the online edition, which has been previously compared to the text version, as my internet connection is very erratic and the University has a concurrent users policy. [2]

Alas it was a decision that I do regret (to some extent) as I have since found myself referring to Harrison’s to find an answer to a problem, whether it be electronically via the DVD given with the book or via fl icking through the book itself, and neglecting some other general medicine or specialised texts that I own. This speaks volumes about Harrison’s comprehensive nature, but also about my enjoyment of the text.

So what do I like about the book? It is detailed, this may speak more about myself than the text but I think that many medical students appreciate this level of detail, if only for interest rather than what is actually required. I mean, do you know of any other books with 395 chapters and another 51 chapters available electronically? I love the detailed explanations of concepts such as “Insulin biosynthesis, secretion and action”, which would normally be found in a more specialised text such as Lehninger’s Principles of Biochemistry™, and pathophysiology of common diseases such as asthma, COPD and myocardial infarction. [3]

The “yellow sections” in the chapters are a great reference for medical students and physicians alike, these are the sections on treatment of certain conditions. The diagrams are great, as are flowcharts, which explain key concepts such as development of a certain condition (for example, ischaemic stroke) or treatment or diagnostic algorithms, such as tuberculosis or HIV/AIDS. The layout of the parts, sections and chapters of the text are very logical and (if you were keen enough) could be read in order for example:

It is easy to see how logically the book is organised, starting from the basics of the given system or group of conditions then working through epidemiology, diagnosis and then fi nally about the conditions themselves; and given that Part 10 of the book as a whole spans pages 1797 – 2082 (yes, 285 pages) you can gather an appreciation for the detail of the text. Another great feature is the “further readings” given at the end of each chapter citing original and review publications from peer reviewed journals so (if interested) you can read some more about the topic you are interested in.

What don’t I like about the book? Having two volumes can sometimes be a little tedious when you pick up one and then find that the topic you want is in the other (although you have to remember page numbers this way, it is still preferable to having one enormous tome with a tiny typeface). The organisation of the text is a double-edged sword as it can get frustrating as when searching for a condition such as polycystic ovarian syndrome (PCOS) this will bring up entries in sections such as: menstrual disorders, biology of obesity, amenorrhoea, metabolic syndrome, hirsutism and virilisation and diabetes mellitus; yet there is no definitive section on PCOS itself as there is for a condition such as phaeochromocytoma. Sometimes you open a page, and the amount of text overwhelms you and there are no figures to break it up, which can be quite intimidating for a medical student to find one specific passage or sentence. This isn’t too large a problem in my opinion, but I have known students to be put off by books of such a nature.