Background:  Individuals  of  black-African  background  have  a high variability in drug metabolising enzyme polymorphisms. Consequently, unless these patients are tested for these polymorphisms, it becomes difficult to predict which patients may have a sub-therapeutic response to medications (such as anti- depressants) or experience an adverse drug reaction. Given the increasing population of black-Africans in Australia, GPs are on the front line of this issue, especially in Greater Western Sydney (GWS) – one of the country’s rapidly increasing populations due to migration. Aim: To ascertain the awareness of GPs regarding drug metabolising enzyme polymorphisms in the black-African population and pharmacogenomic testing in the GWS community. Methods:  A  descriptive,  cross-sectional  study  was  conducted in GWS by analysing GP responses to a questionnaire consisting of closed and open-ended questions. Results: A total of 46 GPs completed the questionnaire. It was found that 79.1% and 79.5% of respondents were unaware of: the high variability in drug metabolism enzyme activity in the black-African population and pharmacogenomic testing (respectively). No respondents had ever utilised pharmacogenomic testing. Only a small proportion of GPs “always” considered a patient’s genetic factors (13.9%) and enzyme metaboliser status (11.1%) in clinical practice. Preferred education media for further information included written material, direct information from other health professionals (such as pharmacists) and verbal teaching sessions. Conclusion: There was a low level of awareness of enzyme metaboliser status and pharmacogenomic testing amongst GPs in GWS. A future recommendation to ameliorate this includes further education provision through a variety of media noted in the study. 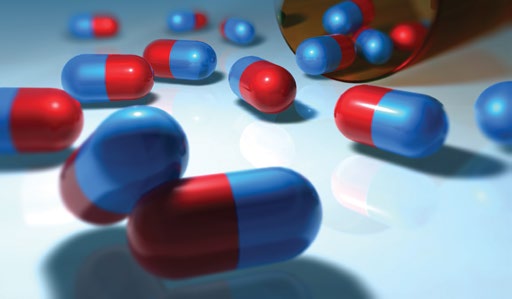 Depression accounts for 13% of Australia’s total disease burden, making it an important health issue in the current context. [1] General Practitioners (GPs) are usually the first point of contact for patients seeking help for depression. [2,3] Antidepressant prescription is the most common treatment form for depression in Australia with GPs prescribing an antidepressant to treat up to 40% of all psychological problems. [2] This makes GP awareness of possible treatment resistance or adverse drug reactions (ADRs) to these medications vital.

Binder et al. [4] described pharmacogenomics as “the use of genome- wide approaches to elucidate individual differences in the outcome of drug therapy”. Detecting clinically relevant polymorphisms in genetic expression can potentially be used to identify susceptibility to ADRs. [4] This would foster the application of personalised medicine by  encouraging  an  inter-individual  approach  to  medication  and dose prescriptions based on an individual’s predicted response to medications. [4,5]

Human DNA contains genes that code for 57 cytochrome (CYP) P450 isoenzymes; these are a clinically important family of hepatic and gastrointestinal isoenzymes responsible for the metabolism of over 70% of clinically prescribed drugs. [5-10] The CYP family of enzymes are susceptible to polymorphisms as a result of genetic variations, influenced by factors such as ethnicity. [6,5,10] Research has shown that polymorphisms in certain CYP drug metabolising enzymes can result in phenotypes that class individuals as “ultrarapid metabolisers (UMs), extensive metabolisers (EMs), intermediate metabolisers (IMs) and poor metabolisers (PMs).”[6,10] These categories are clinically important as they determine whether or not a drug stays within the therapeutic range. Individuals with PM status may be susceptible to experiencing ADRs as a result of toxicity, and conversely, those with UM status may not receive a therapeutic effect. [5,6,10,11]

When considering the metabolism of antidepressants, the highly polymorphic CYP enzymes: CYP2C19 and CYP2D6 are known to be involved. [5,10,12] A study by Xie et al. [13] has shown that for the CYP2D6 enzyme alone, allelic variations induce polymorphisms that result in a PM phenotype of “~1%” in Asian populations, “0-5%” among Caucasians and a variation of between “0-19%” in black- African populations. This large disparity of polymorphism phenotypes was reproduced in a recent study, which also showed that the variation is not exclusive to the CYP2D6 enzyme. [6] It has been reported that the incidence of ADRs among PMs treated with drugs such as antidepressants is 44% compared to 21% in other patients. [5,14] Consequently, increased costs have been associated with the management of UM or PM patients. [5]

The black-African population in Australia and specifically Sydney (where GWS is one of the fastest growing regions) continues to rise through migration and humanitarian programs. [15-18] Almost 30% of Africans settling in Australia in the decade leading to the year 2007 did so under humanitarian programs including under refugee status. [15-17] As refugees are at a higher risk of having mental health problems including depression  due  to  their  traumatic  histories  and  post-migratory difficulties, GPs in GWS face increased clinical interactions with  black-Africans  at  risk  of  depression.  [19,20]  Considering  the high  variability of enzyme   polymorphisms   in   this   population, pharmacogenomic testing may play a role in the primary care of these patients. We therefore conducted a study to assess GP awareness of pharmacogenomic testing and the differences in enzyme metaboliser status (drug metabolism phenotypes). We also investigated the GP preferences of media for future education on these topics.

This is a descriptive, cross-sectional study. Ethics approval was granted by the Human Research Ethics Committee.

Considering GWS is the fastest growing region in Sydney, we focussed on particular suburbs in GWS (Blacktown, Parramatta and Holroyd Local Government Areas). [17-20] Using geographical cluster sampling, a list of GP practices were identified with the aim of recruiting 50 participants.

Data was collected using a questionnaire validated by university supervisors and designed to elicit the level of understanding and awareness among GPs. The main themes of the questionnaire involved: questions regarding basic demographic information; questions aimed at determining the level of GP awareness regarding differences in drug metabolising phenotypes and pharmacogenomic testing; and open- ended questions eliciting the preferred methods of education with respect to pharmacogenomic testing.

We invited 194 GPs between April and May 2014 to participate in the study. The questionnaire and participant information sheet were either given to the practice managers or to the GPs in person. Questionnaires were collected in person within the following two weeks.

The overall response rate was 23.7% (46/194). Our respondents included: 27 females and 19 males. The mean number of years of experience in general practice was 13.9 and most GPs (93.4%, 43/46) had received some form of training in antidepressant prescription in the last 5 years. The number of patients of black-African background seen in the last 6 months ranged from 0 to greater than 100. Only

From 46 participants, 19 had treated a patient of black-African background with antidepressants, 18/19 reported having identified at least one ADR (Figure 1). 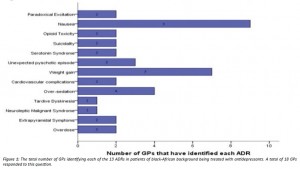 Awareness amongst GPs of the different drug metabolism activity phenotypes in black-Africans was low with 79.1% (34/43) being unaware. Patients’ genetic factors and enzyme metaboliser status were “always” considered by only 13.9% (5/36) and 11.1% (4/36) of GPs, respectively. There was no statistically significant difference regarding awareness between GPs who had treated black-African patients and those who had not (21.1% vs 13.3% respectively, p=0.89).

GP awareness and use of pharmacogenomic testing 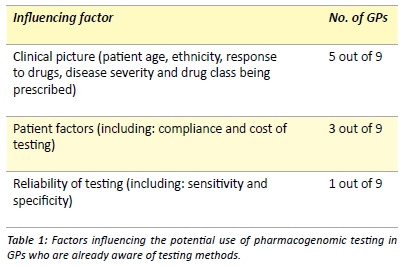 GPs that were aware of pharmacogenomic testing were asked, through an open-ended question, how they obtained information regarding these  methods.  Three  main  categories  were  identified  based  on their responses (Table 2). All GPs were then asked to note down their preferred medium of education for pharmacogenomic testing (Table 3). Multiple responses were allowed. 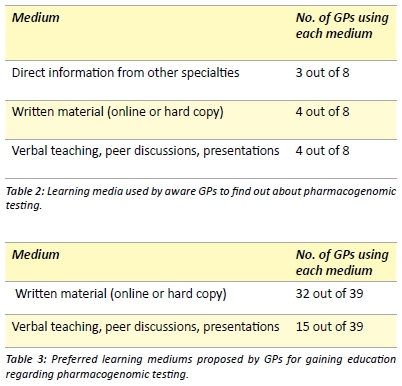 A previous study reported that a high proportion (97.6%) of physicians agreed that differences in genetic factors play a major role in drug responses.  [22]  Whilst  it  is  arguable  that  knowledge  of  genetic factors holistically playing a role in drug response may be universal, our study specifically focussed on the knowledge of differences in enzyme metaboliser status. It was found that 79.1% of GPs (34/43) were unaware, with only a small number of GPs “always” considering enzyme metaboliser status (11.1%) in their management. Given the aforementioned  importance  of  genetic  factors  and  the  potential to reduce ADRs using personalised medicine, this is an area for improvement.

When considering pharmacogenomic testing, we found 79.5% (35/44) of GPs to be unaware of testing methods. No GP had ever utilised pharmacogenomic testing, this low rate of utilisation is also reported previously in other several studies. [22-24] A lack of utilisation and awareness arguably forms a barrier against the effective incorporation of personalised medicine in the primary care setting. These low figures represent a lack of education regarding pharmacogenomics and its clinical applications. This is an issue that has been recognised since the arrival of these testing methods. [25] McKinnon et al. [25] highlighted that this lack of education across healthcare professionals is significant enough to be considered a “barrier to the widespread uptake of pharmacogenomics”. To ameliorate the situation, the International Society of Pharmacogenomics has issued recommendations in 2005 for  pharmacogenomics  to  be  incorporated  into  medical  curricula. [26]  Another  contributing  factor  to  the  low  utilisation  of  testing could include the lack of subsidised tests available through Medicare. Currently, pathology labs do provide pharmacogenomic testing (such as Douglas Hanley Moir and Healthscope), however this is largely done so through the patient’s expenses as only two methods are subsidised by Medicare. [23,27,28]

Amongst those aware of pharmacogenomic testing, eight out of nine GPs answered that they would be more likely to utilise pharmacogenomic testing in black-African patients who had previously experienced ADRs; this is consistent with findings noted by van Puijenbroek et al. [29]. Among these GPs, factors that were noted to be potential influences in their utilisation of testing included: patient factors such as compliance and the reliability of the test, and, factors affecting the clinical picture (as described in Table 1). This is consistent with findings by studies that have also identified cost and a patient’s individual response to drugs as influential factors in a physician’s decision making. [29,30]

Considering that the majority of information regarding enzyme metabolism and pharmacogenomic testing was published in pharmacological journals,[6,8-14,30-32] much of this knowledge may not have been passed on to GPs. In order to understand the preferred media of information for GPs, we posed open-ended questions and discovered that the majority of GPs who answered the question (32/39), would prefer information in the form of writing (Table 3). This could be either in the form of online sources (such as guidelines, summaries, the National Prescribing Service or the Monthly Index of Medical Specialities) or peer reviewed journal articles. Current literature also reflects this preference for GPs to gain education regarding pharmacogenomics through journal articles. [22] The other preferred medium of education was through verbal teachings, peer discussions and presentations (Table 3), with there being specific interest in information being disseminated by clinical pathology laboratories; this is also reflected in the literature. [22,29]

Small sample size is a limitation of this study with possible contributing factors including: the short amount of time allowed for data collection and the low response rate due to GP time constraints. Strengths of the study include the use of a validated questionnaire catered to our target population and open-ended questions which gave us further insight into GP preferences.

Currently, anti-coagulants provide an example of the clinical applications of considering enzyme polymorphisms in patient management. [33,34] Warfarin is a particular example where variability in INR has been associated with enzyme polymorphisms, leading to the utilisation of dosage algorithms to optimise clinical outcomes. [34] Similarly, when using antidepressants, pharmacogenomic testing could play a role in clinical decision making with Samer et al. [5] suggesting dose reductions and serum monitoring for those with known PM status. However, as identified in our study, there is an overall lack of awareness regarding the differences in enzyme metaboliser status and the methods available for pharmacogenomic testing.

There is a low awareness among GPs regarding both the differences in enzyme metaboliser status in the black-African community, and the methods of pharmacogenomic testing.

To optimise clinical outcomes in black-African patients with depression, it  may  be  useful  to  inform  GPs  of  the  availability  and  application of pharmacogenomic testing. We have highlighted the preferred education modalities through which this may be possible.

We would like to acknowledge and thank Dr. Irina Piatkov for her support as a supervisor during this project.