Prasadi Adikari Fifth Year Medicine (Undergraduate) James Cook University
Prasadi enjoys medical aid volunteering and looks forward to one day being part of the Red Cross service with the aim of bringing equal healthcare to all parts of the world. In her spare time, she enjoys playing tennis and is an avid cricket fan.

Malaria, especially falciparum malaria, has the potential to cause multi-organ failure and is a major cause of morbidity and mortality in pregnant women. It is defined by the World Health Organisation (WHO)  as  the  presence  of  asexual  parasitaemia  and  one  or more of the following manifestations: cerebral oedema; severe anaemia; renal failure; pulmonary oedema; adult respiratory distress syndrome (ARDS); disseminated intravascular coagulation (DIC); acidosis; hypotension or shock. [1] The pathophysiology underlying this disease will be discussed in this paper and will serve as a basis for outlining the importance of immediate supportive management and prompt administration of appropriate anti- malarial chemotherapy.

Malaria is an infectious, tropical disease caused by parasitic protozoa of the species Plasmodium. The malaria parasites are transmitted via the bite of an infected female Anopheles mosquito (vector), the most virulent species being Plasmodium falciparum (P. falciparum). [2,3] Malaria in pregnancy is a major public health concern and contributes heavily to maternal and neonatal deaths worldwide. [3] In this article, the pathophysiology of P. falciparum malaria will be discussed to provide a background for the relevant management options and ethical decisions faced when treating pregnant women with complicated P. falciparum malaria. 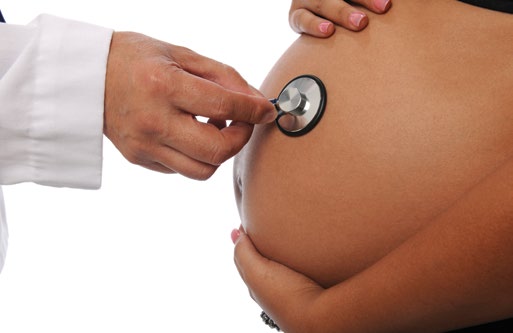 A 22-year-old woman, Ms AP, was admitted to Colombo General Hospital with high-grade fever, tremors and confusion. A detailed history revealed that she was a married, small business owner from a rural, farming region located in a malaria endemic area in Sri Lanka. [2] Her medical history was clear of any clinically significant past or current illnesses. However, it was found that she was four weeks pregnant with her first child. 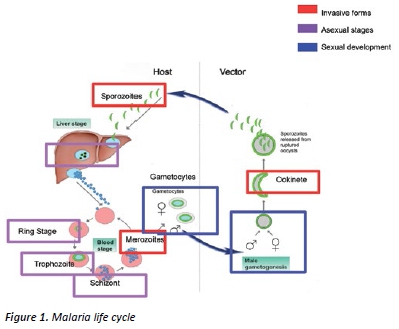 Effect of malaria in pregnancy

Infection of red blood cells by the asexual forms of P. falciparum and the involvement of inflammatory cytokines result in the prototypical clinical manifestations of malaria. [4] The initial paroxysm of P. falciparum malaria presents as non-specific ‘flu-like’ symptoms including malaise, headache, diarrhoea, myalgia and periodic fever every 48 hours. [4,5] These  symptoms  are  associated  with  an  immune  response  which is triggered when infected red blood cells (RBCs) rupture, releasing RBC remnants, parasitic antigens, and toxins into the bloodstream. [4,5] If untreated, this fairly un-alarming presentation can quickly progress to complicated malaria involving vital organ dysfunction. [4,5] In   pregnancy, complicated malaria is more common due to altered immune function.[5,6].Discussed below is the pathophysiology and supportive management of the major manifestations of complicated malaria in pregnant women.

Severe anaemia (Hb less than 80g/L) is a major manifestation of pregnant women with P. falciparum complicated malaria and has the potential to cause maternal circulatory collapse. This is due to additional demands of the growing foetus and the ability of P. falciparum to invade RBCs of all maturities. [6,7] Both chronic suppression of erythropoiesis by tumour necrosis factor alpha (TNF-α) and synchronous eruption of erythrocytic schizonts contribute to severe anaemia. [6,7] P. falciparum also derives energy via breakdown of haemoglobin, making infected RBCs more rigid and less able to navigate the micro-circulation. [6,7] This, along with alteration of non-infected RBC membranes, by addition of glycosylphosphatidylinositol (GPI), cause increased haemolysis and accelerated splenic clearance of RBCs. [6,8] Increased activity of the spleen manifests clinically as splenomegaly. [8] In pregnant women, like Ms AP, who present with severe anaemia, packed red cells are transfused when a safe blood supply is acquired. [9] However, blood transfusions should be used sparingly in resource poor areas where the risk of negative outcomes, such as incidental transfer of human immunodeficiency virus (HIV), is great. [9,10]

Cerebral malaria is an ominous sign in pregnant women and is a neurological syndrome characterised by altered consciousness (Glasgow Coma Scale ≥ 8) and uncontrolled, sub-clinical seizures. The precise mechanisms involved in the onset of this phenomenon remains unclear; however, localised perfusion defects, metabolic disturbances, and host immune responses all play a critical role. [11,12] Decreased localised perfusion is primarily due to microvascular changes. P. falciparum proteins, such as Plasmodium falciparum erythrocyte membrane protein 1 (PfEMP-1), form knobs on the surfaces of infected RBCs and bind to receptors such as intracellular adhesion molecule 1 (ICAM-1) on the endothelium. This ability to cyto-adhere to cells results in sequestration of infected RBCs in blood vessels, causing endothelial inflammation and obstruction. [7,11] Interestingly, in P. falciparum malaria, a phenomenon known as rosetting also occurs. [11,12] Here, PfEMP-1 on infected RBCs bind to glycosaminoglycan receptors on uninfected RBCs, causing aggregation. [11,12] This further slows microcirculatory flow, reducing perfusion and causing ischemia-induced functional deterioration in organs such as the brain. [9,10] Mechanical ventilation in conjunction with appropriate anti- malaria drugs may be life-saving; preventing fatal hypoxemia and organ failure. [13,14] Seizures and other complications of cerebral malaria are treated with anti-convulsants to protect against rapid neurologic deterioration. [13,14]

Hypoglycaemia is a common manifestation in pregnant women with complicated malaria and arises from increased anaerobic glycolysis when P.falciparum metabolises glucose to lactic acid for energy. [7,8] In addition, decreased hepatic gluconeogenesis and increased demands of a febrile illness contribute to lowered blood glucose levels. [7,8] Intravenous administration of 25-50% dextrose solution injection is standard treatment and benefits both mother and foetus. [9,10]

Hepatic and renal failure occurs in complicated malaria due to mechanical obstruction of blood vessels by infected erythrocytes and via immune-mediated destruction of cells. [15,16] Loss of function of these organs result in poor lactate clearance, which along with increased anaerobic glycolysis and parasitic lactate production, potentiate metabolic acidosis. [15,16] Ultimately, these changes can progress to respiratory and circulatory distress. [15,16] In conjunction with anti- malarial agents, the best supportive therapy is fluid resuscitation or if required, renal replacement therapy. [15-19] Caution should be taken when treating malaria-induced hypertension in pregnancy as excessive fluid resuscitation via intravenous (IV) saline could worsen pulmonary oedema, triggering respiratory failure. [18, 19]

ARDS is more common in pregnant women and can be precipitated by  pulmonary  oedema,  compensatory  metabolic  acidosis,  sepsis, and severe anaemia. [11] It stems primarily from increased vascular permeability due to ongoing inflammation, as well as reduced pulmonary micro-circulatory flow. [11,12] Mechanical ventilation is essential in patients with ARDS as it helps maintain positive expiratory pressure and oxygenation. [13, 14] In patients presenting with hypotension, secondary sepsis due to bacterial co-infection should be suspected. Appropriate bloods including blood cultures should be taken and immediate treatment with broad-spectrum antibiotics such as clindamycin commenced. [14,19]

Effect of malaria on the foetus

Foetal distress is a concern in complicated malaria. Sequestration of RBCs in the placenta, via the binding of PfEMP-1 to chondroitin sulphate A (CSA) on the syncytiotrophoblast, can cause placental insufficiency. This results in poor oxygen supply to the foetus and may cause miscarriage, premature labour, still birth, growth restriction, and low birth weight. [20,21] This phenomenon is more likely in primigravida patients, such as Ms AP, and is thought to be due to lack of a specific immune response to the unique placental variant surface antigens (VSA) expressed by placental parasites. This hypothesis is supported by a longitudinal study by Maubert et al. which showed that antibodies against CSA-binding parasites were present in 76.9% of multigravida women by 6 months compared to only 31.8% of primigravida women. [22]  In  addition,  severe  fever  and  hypoglycaemia  disrupts  normal fetal development, which may induce premature labour and cause intrauterine growth restriction. [20,21] Micro-trauma to the placenta also increases the risk of infected maternal erythrocytes crossing into foetal circulation. Inevitably, this has the potential to cause congenital malaria and adds to the burden of complicated malaria in pregnant women. [20,21] Evidently, promoting prompt and efficacious drug treatment of malaria is necessary to reduce the systemic impact of malarial hyperparasitemia and to reduce foetal distress and mortality. Furthermore, due to the risk of congenital malaria, placenta, cord blood and neonatal thick and thin blood films should be considered for detection of malaria at an early age. [23]

According to the South East Asian Artesunate Malaria Trial (SEAQUAMAT) study, a multi-centred, randomised controlled trial in South East Asia, artemisinin derivatives such as parenteral artesunate are the drugs of choice in pregnant women with complicated malaria. [24] These drugs are superior to quinine which is associated with a narrow therapeutic window, hypotension, and hyperinsulinemic hypoglycaemia. [24] While quinine was the traditional drug of choice, it is now considered outdated and the drug artemenisin is currently used. [24,25] Artemisinin derivatives work by producing cytotoxic oxygen radicals within the parasite.[24] Unlike other anti-malarial drugs, such quinine and chloroquine, artesunate is toxic not only to mature schizont forms of P. falciparum but also to early ring stage endoerythrocytic  trophozoites.  [24,25]  Therefore,  they  work  faster to clear parasites from the blood, reducing complications linked with micro-vascular damage and parasite glucose consumption. [24-27] While relatively safe, these drugs have been associated with foetal anaemia and lowered bone density in early trials. [23-28] However, it is important to remember that in complicated malaria the mother is the priority as without her survival, foetal mortality is highly likely. Importantly, efficacy of above drugs in pregnancy should also be monitored as pregnancy appears to alter the efficacy of anti-malarial agents. [23]. Patients should be advised of the risk of recurrence and offered regular blood films throughout their pregnancy. [23] 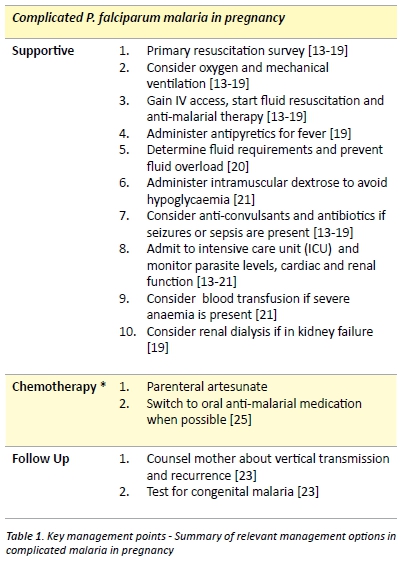 Complicated malaria in pregnancy is a medical emergency and can result in death if not treated properly. Like in Ms AP’s case, prompt administration of parenteral artesunate in conjunction with general supportive therapy is required for the best chance of survival for both the mother and foetus. [29]

Informed  consent  was  obtained  from  the  patient  in  regard  to publication of this article for educational purposes.

[23] Royal College of Obstetricians and Gynaecologists. The diagnosis and treatment of malaria in pregnancy. Greentop Guideline No. 54B. London: RCOG; 2010.