Meniscal repairs: A review of past, current, and future options

Meniscal tears are amongst the most common knee injuries. The purpose of the current article is to identify the most common meniscal tears, current treatment options, and potential future treatment methods. The traditional approach to meniscal tears was total meniscectomy. However, this approach has been largely abandoned due to the emergent relationship between even partial meniscectomy and the early onset and development of osteoarthritis. Complete meniscectomy is indicated only if the meniscus is torn beyond repair, however, preservation of the meniscal rim is always a priority. Tears in the peripheral one-third region are well suited for repair and these have high success rates. When irreparable damage is encountered, removal and replacement of the meniscus with natural or synthetic scaffolds presents a promising option if its efficacy can be definitively demonstrated in future trials.

The menisci are a pair of semilunar, wedge-shaped fibrocartilaginous structures sitting between the femur and the tibia within the tibiofemoral joint of each knee. They are involved in load transmission and produce significant load-spreading across the articular surfaces in normal knees [1,2], as well as shock-absorption, which is reduced in painful knees [3]. Other meniscal functions include joint lubrication [4], structural stability [5], and proprioception [6].

Meniscal tears are among the most common knee injuries and can be secondary to trauma or degenerative changes [7]. The former occurs when excessive force is applied to a normal meniscus while the latter occurs from normal forces acting on a degenerative structure [8]. Acute tears are usually caused by a traumatic, twisting motion of the knee, frequently during sports [7]. Sports-related meniscal tears are often associated with anterior cruciate ligament (ACL) rupture [7,9].

In addition to the two aetiological categories mentioned, meniscal tears can be classified according to the pattern of rupture seen at arthroscopy [8]. The most commonly described patterns of meniscal injury are as follows: 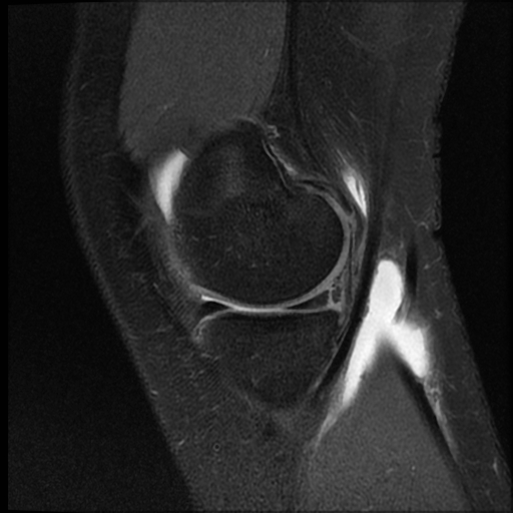 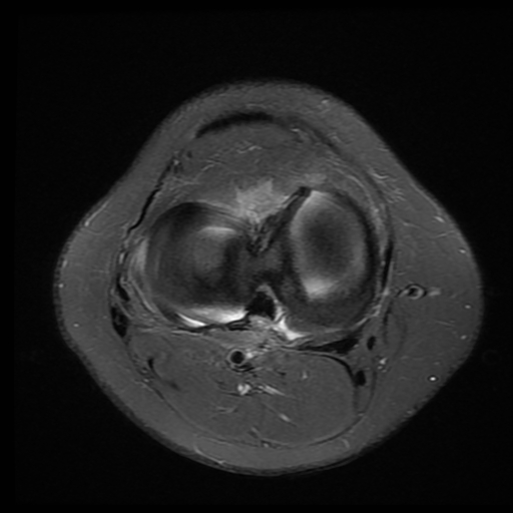 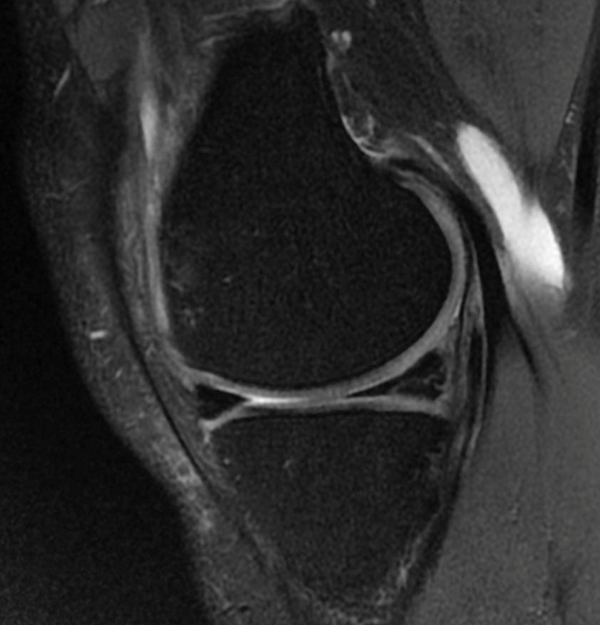 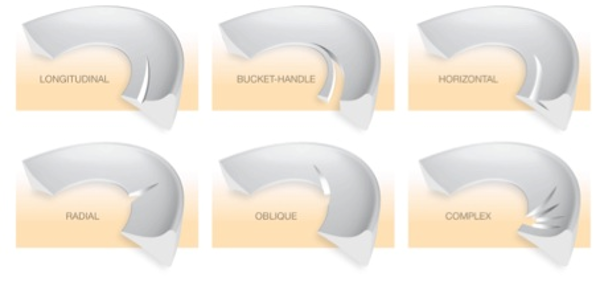 A literature search of publications relating to meniscal repairs was undertaken. The databases PubMed, CINAHL, and Ovid were searched. The search terms “Meniscus OR Meniscal”, “Tear”, “Treatment OR Repair OR Surgery”, “Knee”, “Options” and “Outcome” were used. This search yielded 453 publications. Additional articles were obtained from bibliographic screening. After the search, articles that were not relevant to meniscal tears of the knee and treatment options were excluded. In the final analysis, 37 articles were included in the current review.

The traditional approach to meniscal tears, until the 1970s, was total meniscectomy [11]. However, this approach has been largely abandoned due to the emergent relationship between even partial meniscectomy and the early onset and development of osteoarthritis (OA) [7,12-15]. Meniscectomies have been shown to cause joint-space narrowing, lowering the rate of regeneration, leading to an increase in the degenerative changes in the surrounding cartilage, and hence a higher incidence of OA [16-20]. In a normal knee, the menisci transmit 50% of joint-compressive forces in full extension and 85% of the load at 90° of flexion [21]. However, following a total meniscectomy, the tibiofemoral contact area is reduced by approximately 75%, while contact forces increase by 235% [1,2]. Today, repair and preservation of the menisci is the universally-accepted approach to meniscal tears.

Untreated meniscal damage is a potent risk factor for the development of OA [22]. When meniscal repair is not possible, partial meniscal resection is preferred to total meniscectomy, and is associated with less radiographic OA over time [22,23]. A systematic review of clinical outcomes found lateral meniscectomy to be associated with significantly greater frequency of radiographic OA, reduced knee function and future instability than medial meniscectomy [24]. The lateral meniscus has been reported to carry a higher load in the knee compared with the medial meniscus, and its loss may result in increased cartilage contact stress [22]. Furthermore, degenerative meniscal tear and cartilage changes at the time of surgery were associated with radiographic OA more frequently than were longitudinal tear and absence of cartilage changes, respectively [22].

Meniscus surgery procedures have rapidly developed from open procedures to arthroscopic surgery over the past two decades [25]. Reparability of the meniscus depends on several factors, such as vascularity, type of tear, chronicity, and size [15,26]. Complete meniscectomy is indicated only if the meniscus is torn beyond repair, however, preservation of the meniscal rim is always a priority [15,26,27].

The indications for meniscus repair include: active patients with tibiofemoral joint line pain, patients younger than 50, or patients between 50 and 60 who are athletically active. Repair may also be undertaken with concurrent knee-ligament reconstruction, a reducible meniscus tear, and good tissue integrity [28].

Tears in the peripheral one-third region (zone 1, also known as the red-red zone due to its high vascularity; Figure 5) are well suited for repair, and these have high success rates. Tears in the middle-third region (zone 2, also known as the red-white zone) are often reparable with reasonable success rates. Longitudinal, radial, and horizontal tears confined to zones 1 and 2 are patterns that are usually amenable to repair [28-30]. The vascularity of the menisci is important, as it is critical to the success of a healing response. Meniscal vascularity has been described by Arnoczky and Warren [31]. The degree of vascular penetration was found to be 10-30% of the width of the medial meniscus, and 10-25% of the width of the lateral meniscus. Therefore, tears in the vascular zone have the highest chance of healing. Cannon and Vittori [32] reported a decline in healing rates as tear location moved from peripheral to central: 90% for tears within 2 mm of the periphery, 74% for tears within 3 mm of the periphery and 50% for tears within 4-5 mm of the periphery. The length of the tear has also been suggested to affect repair outcome. Cannon and Vittori [32] reported 90% and 50% healing rates for tears less than 2 cm and greater than 4 cm, respectively. Bach et al. [33] documented significantly earlier failure in larger tears. However, other data has been unable to demonstrate a significant difference in repair outcomes based on tear length [33]. 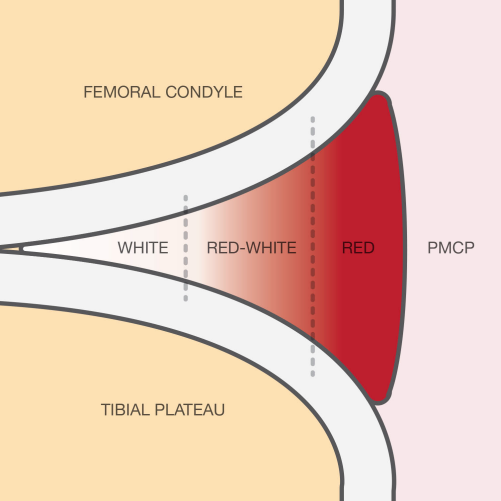 The identification of meniscal tears suitable for repair is usually made at the time of arthroscopy. The three general meniscal repair techniques are as follows:

Arthroscopic trephination of vascular channels at the free meniscal edges has also shown improved meniscal healing. Trephination is a safe and easy procedure that involves the creation of a channel through the meniscus from the vascularised zone to the tear. Fox et al. [45] reported good results in 90% of cases and Zhang et al. [46,47] showed trephination led to healing of all tears, either partially or fully [47], with an improved healing rate and lower re-tear rate compared with suturing alone [46].

Not all meniscal tears can or should be repaired, particularly if considerable damage has been sustained. Contraindications include: tears located in the inner-third region (zone 3, also known as the white-white zone, where the tissue is entirely devoid of a vascular supply), and tears with major degeneration. Longitudinal tears measuring less than 10 mm in length and incomplete radial tears that do not extend into the outer one-third of the meniscus should also not be repaired. Older patients (above 60 years of age) and those unwilling to follow post-operative rehabilitation programs would also be unsuitable candidates [28].

Degenerative (complex) tears in older patients are among those tears historically treated by unnecessarily invasive means. Sihvonen et al. [48] conducted a randomised sham-controlled trial in patients with a degenerative meniscal tear and no knee OA. Patient outcomes after arthroscopic surgery were no better than those after a sham operation. A subsequent meta-analysis showed a small, clinically insignificant benefit from surgical intervention that is entirely absent within two years [49]. Current evidence does not support a role for arthroscopic debridement, washout, or partial meniscectomy for middle-aged and older patients with knee pain with or without signs of OA [49,50]. First-line treatment comprises non-operative modalities, such as education; self-management; exercise; weight loss, if overweight or obese; walking aids, if indicated, paracetamol; non-steroidal anti-inflammatory drugs; and intra-articular glucocorticoids [50]. Knee pain refractory to conservative therapy may respond to partial meniscectomy in the absence of OA when combined with a physiotherapy program, however, relief does not persist in the long-term [10].

Potential future treatments have expanded their focus beyond the conventional methods. In some cases, there may be an indication to resect and replace the entire meniscus. Meniscal replacement has a greater capacity to protect the joint surfaces and is a suitable option in cases where patients have suffered degenerative changes due to prior meniscectomy or when an irreparable tear is encountered [16]. Meniscal replacement surgery uses natural or synthetic scaffolds to guide tissue repair or regeneration in three dimensions while providing a temporary construct for mechanical function [51]. Clinical application of both allograft transplantation and synthetic replacement scaffolds show promising results [52], however, their superiority to partial meniscectomy still needs to be demonstrated [53].

Meniscal tears are a common orthopaedic pathology that may have an acute traumatic or chronic degenerative cause. Due to the likely complication of OA, alternatives are now preferred to total meniscectomy. There are several surgical approaches suited to treating different patterns of meniscal tear. Where indicated, meniscal repair is the preferred method of treatment, with evidence supporting very good long-term results. When irreparable damage is encountered, removal and replacement of the meniscus with natural or synthetic scaffolds presents a promising option, provided its efficacy can be definitively demonstrated in future trials.

The authors wish to acknowledge Hope Orthopaedics for supplying Figure 4 and Figure 5.

[2] Baratz ME, Fu FH, Mengato R. Meniscal tears: the effect of meniscectomy and of repair on intraarticular contact areas and stress in the human knee. A preliminary report. Am J Sports Med. 1986;14(4):270-5.

[22] England M, et al. Meniscal tear in knees without surgery and the development of radiographic osteoarthritis among middle-aged and elderly persons. Arthritis Rheum. 2009;60(3):831-39.