Perioperative pain management – should we pre-empt or prevent pain?

Dr. Lukman Anderson Intern, Hunter New England Health
Luke was awarded the ANZCA Faculty of Pain Medicine Prize for this review completed as a final year medical student. His interests include critical care medicine, anaesthetics, pain medicine, rural/remote health and medical education. He has aspirations for a career in anaesthesia. Interests outside of medicine include football, writing and learning Indonesian.

Central sensitisation is the process whereby nociceptive inputs trigger increased excitability and synaptic efficiency of central nociceptive pathways, and is a key process in the development of chronic postoperative pain. Pre-emptive analgesia, whereby analgesia is given prior to surgical incision, has previously been advocated as a method of decreasing the process of central sensitisation and its clinical consequences – namely hyperalgesia, allodynia and chronic post-surgical pain (CPSP). A systematic review of pre-emptive analgesia has demonstrated positive studies existing only for the modalities of epidural analgesia, NSAIDs and local anaesthetic wound infiltration. [1]

The concept of pre-emptive analgesia, where the main focus is on the timing of the intervention with respect to incision, should be replaced with the broader approach of preventive analgesia. Appropriate analgesia should be provided for as long as a sensitising stimulus remains present. Further research should focus on determining the analgesic regimens that most effectively decrease the clinical consequences of central sensitisation, including hyperalgesia, allodynia and CPSP. 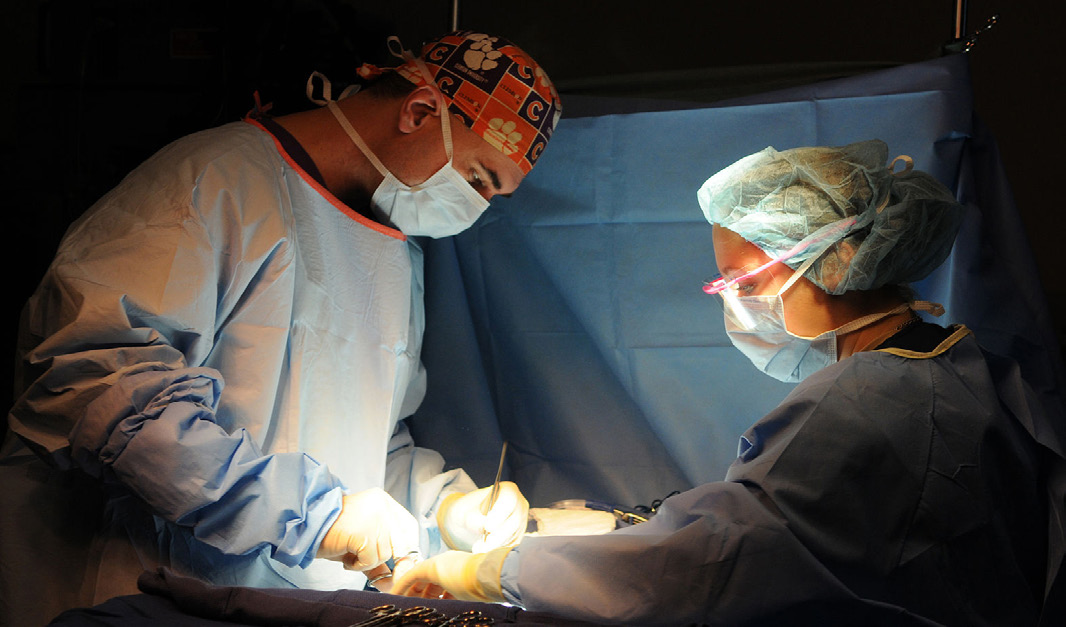 The relationship between intra-operative tissue damage and the amplification of post-operative pain was first described by Crile almost a century ago, in a process now referred to as central sensitization. [2] The concept of pre-emptive analgesia was proposed as a means of decreasing changes occurring in nociceptive pathways, resulting in minimisation of post-operative pain and analgesic consumption, as well as a decreased incidence of CPSP. [8] This approach involves the administration of analgesia prior to surgical incision. While this has been shown to effectively decrease dorsal horn changes associated with central sensitisation, clinical evidence has been equivocal. [9]

More recently, preventive analgesia has been proposed as a more effective method of modulating central sensitisation. Preventive analgesia focuses on blocking any nociceptive signals arriving at the dorsal horn by providing analgesia for as long as sensitising stimuli persist. [4] Interventions may extend from the pre-operative period until final wound healing, and are not confined to the pre-incisional period as for the pre-emptive approach. Preventive analgesia is defined in Acute Pain Management: Scientific Evidence as the “persistence of analgesic treatment efficacy beyond its expected duration”. [9, p.13] This approach has been found to be a more effective strategy for decreasing post-operative pain and analgesic consumption than a strictly pre-emptive approach. [2,6,9] Perioperative pain management should emphasise continuous analgesia for as long as a noxious stimulus is present, rather than focus on the timing of an intervention.

The surgical process produces nociceptive signals via several mechanisms, including skin incision, tissue damage and post-operative inflammation. Repeated afferent noxious signals at the level of the dorsal horn can induce neuronal hypersensitivity, mainly from alterations to glutamate receptors and ion channels. [4] Alterations at the dorsal horn include increased membrane excitability, greater synaptic efficiency and decreased activity of inhibitory interneurons. [10] This produces the clinical consequences of central sensitisation, namely hyperalgesia and allodynia. It may also lead to the development of chronic post-surgical pain (CPSP), which affects 10-50% of patients post-surgically, and is severe in 2-10% of these cases. [4]

While general anaesthesia attenuates the transmission of noxious afferent signals to the spinal cord, it does not completely block it. [3] Systemic opioids may similarly fail to provide sufficient blockade at the dorsal horn to prevent central sensitisation. Hence, while the patient is unconscious during the procedure, the stimuli necessary for central sensitisation persist, leading to increased post-surgical pain with greater analgesic consumption, and possibly increasing the chance of developing CPSP.

N-methyl-d-aspartate (NMDA) has been implicated as a key substance in the development of central sensitisation. [10] There has been increasing interest in the role of NMDA antagonists such as ketamine, dextromethorphan and magnesium as agents in providing preventive analgesia. Possible mechanisms include direct effects at the dorsal horn, and by reduction of the development of acute opioid tolerance. [7]

MEDLINE was searched through to June 2014 using the following search criteria: preventive OR pre-emptive OR preemptive AND analgesia. 1166 results were returned. Studies qualifying as level one evidence by NHMRC evidence hierarchy were included in the review (systematic reviews and meta-analyses). 1155 results were excluded from the review as they did not qualify as level one evidence. Eleven studies were identified for inclusion.

Moiniche, Kehlet and Dahl reviewed double-blind, randomised, controlled trials (RCTs) which evaluated pre-incisional versus post-incisional analgesia, and the effect on postoperative pain control. [11] No clinical benefit was observed across the 80 included studies, across a spectrum of analgesic modalities. One included trial, however, found a significant reduction in pain at 6-months post radical prostatectomy with pre-emptive epidural analgesia. [12] An update on this systematic review revealed 30 further randomised trials published in the period 2001-2004. [13] Six out of eight trials published in this period reported reduced analgesic consumption and post-operative pain with pre-emptive NSAIDs .The results from studies evaluating other modalities remained uniformly negative.

For each of these outcome measures, an effect size was calculated in order to control for the variety of pain scales used across studies. The calculated effect size for each outcome was then combined to measure a single theoretical construct – termed ‘pain experience’. Where the effect size and confidence interval (CI) exceeded 0, the effect was deemed to be statistically significant. This differed to the approach by Moiniche et al., where the scores from the differing pain scales were converted into a single visual analogue scale (VAS) score and combined, and may have contributed to the conflicting results between the studies.

This meta-analysis includes trials that have since been withdrawn from publication. These trials related to pre-emptive local anaesthetic wound infiltration and NSAID administration. A re-analysis of the data by Marret et al. concluded that the retraction of these trials did not significantly alter the results of the study. [15] The study has further been criticised for a lack of detail regarding the review process, and the exclusion of non-English trials leading to publication bias. [1]

15 studies evaluating the efficacy of preventive analgesia were identified by Katz and McCartney, nine of which were positive trials. [6] One of these positive trials, demonstrating pain reduction with bone marrow injection of opioids, has since been withdrawn from publication due to academic fraud. [16] Four of six studies examining the use of NMDA antagonists revealed lower post-operative pain and decreased analgesic consumption in the intervention group. Preventive effects were also observed with the use of clonidine and local anaesthetics.

The limited amount of studies included means that the conclusions regarding the efficacy of preventive analgesia drawn from the review are weakened significantly by the retraction of the positive study by Reuben et al. [17] However, the study was influential in producing a shift from a pre-emptive approach to a preventive approach, by directly comparing these approaches in a single review. The efficacy observed in trials evaluating the role of NMDA antagonists also renewed interest in the role of these agents.

McCartney, Sinha and Katz performed a systemic review of RCTs evaluating NMDA antagonists (ketamine, dextromethorphan or magnesium) in preventive analgesia. [7] The primary outcome was reduction in pain, analgesic consumption or both in a time period beyond five half-lives of the drug utilised. Ketamine was found to have a positive effect in 58% (14 of 24) of included studies, and dexomethorphan was positive in 67% (8 of 12). No preventive effects were observed in four studies of magnesium.

The effect of NMDA antagonists on the incidence of CPSP is unclear. Low-dose intravenous ketamine administered with thoracic epidural analgesia has been observed to confer reduced post-thoracotomy pain in the immediate post-operative period and at one and three months after surgery. [18] A more recent RCT, however, noted no difference between ketamine and normal saline at four months post-thoracotomy, although it did confer post-operative pain relief. [19] The conflicting results may have been influenced by the difference in post-operative pain management, with the positive study providing a continuous ketamine infusion 3 days post-operatively. In the setting of colonic resection, a study of multimodal intraoperative epidural analgesia (local anaesthetic, opioids, ketamine and clonidine) revealed a reduction in pain 1-year post operatively. [20]

The aforementioned areas of uncertainty and controversy regarding pre-emptive and preventive analgesia have hindered the development of any formal guidelines to guide clinical practice. The Australian and New Zealand College of Anaesthetists (ANZCA) position statement ‘Guidelines on Acute Pain Management’ states that “preventive treatment of postoperative pain may reduce the incidence of chronic pain”. [21, p1] The ANCZA publication ‘Acute Pain Management: Scientific Evidence’ presents several key messages, and outlines the efficacy of pre-emptive epidural analgesia, preventive NMDA antagonist administration and ketamine (in colonic surgery only), but does not provide specific clinical recommendations. [9]

Regardless of the controversies that surround the issue, effective post-operative and long-term pain management is fundamental to quality patient care. Post-operative pain control should be individualised and a management plan should be developed prior to surgery, in partnership with the patient, taking into account psychosocial factors that may influence the pain experience. This should be based upon a thorough history, taking into account prior pain experiences, past analgesic use, current medications and immediate patient concerns. [2] ANZCA recommends a multimodal approach, as to improve efficacy of each drug, provide lower doses of individual drugs and reduce the risk of significant side effects. [21] Non-pharmacologic therapies should be instituted as a part of a multimodal approach where appropriate.

The process of central sensitisation has been the target of multiple methods of intervention in a wide array of treatment modalities, with the aim of decreasing post-operative pain, decreasing analgesic consumption and reducing the incidence of CPSP. The development of a meaningful evidence base has been encumbered by definitional confusion, difficulties with study design and academic misconduct leading to the retraction of articles. It is, however, apparent that the concept of pre-emptive analgesia should be replaced with the broader approach of preventive analgesia, and appropriate analgesia should be provided as long as a sensitising stimulus is present. Further research should focus on determining the analgesic regimens that most effectively decrease the clinical consequences of central sensitisation, including hyperalgesia, allodynia and CPSP.

The author would like to thank Dr. Andrew Powell, Staff Specialist Anaesthetist at John Hunter Hospital for providing feedback during the drafting of this article.