The management of adnexal masses in pregnant women: A case report and review of literature

Dr. Michael Petinga MBBS, BMedSc The Wollongong Hospital A/Prof Chris Georgiou BSc (Hons) PhD MBBS MRCOG FRANZCOG University of Wollongong Director of Obstetrics (Eastern Health), Victoria
Michael is a PGY2 Resident Medical Officer at The Wollongong Hospital and a GP registrar with GP Synergy. He graduated from the University of Wollongong in 2013. Michael has an interest in obstetrics & gynaecology and general practice. Chris is an enthusiastic teacher of obstetrics and gynaecology and encourages medical students (and junior doctors) to question their practice, challenge the dogmas of their speciality, and continually develop their clinical and surgical skills to best serve their patients.

A 33 yr old woman presents with irregular menstrual bleeding and on examination has bilateral adnexal masses. At this original presentation, she was unexpectedly pregnant in the first trimester. Throughout her pregnancy these adnexal masses were presumed to be benign ovarian dermoids. However, at caesarean section the appearances were suspicious. Histological studies confirmed the presence of bilateral ovarian mature teratomas but also of a mucinous intestinal borderline tumour. A literature review of the management of adnexal masses in pregnancy is included.

The diagnosis of adnexal masses during pregnancy has become increasingly common due to the widespread use of routine antenatal ultrasounds. [1-4,22] Despite the advancements in ultrasound technology, incidental adnexal masses are still being identified during caesarean section. [1,5,6]  Although the management of adnexal masses may differ if diagnosed during pregnancy or at caesarean section, the diagnostic limitations of antenatal ultrasonography may result in modifications in intraoperative or postpartum management.

A 33 year old nulliparous woman presented to her general practitioner with concerns about irregular menstrual cycles that she had been experiencing since menarche at 13 years of age. The cycle duration was reported to be 30-90 days in length with a bleeding duration of approximately 7 days. The bleeding was described as “not heavy”.  She was in a long-term relationship and not using any form of contraception. She denied any pelvic or abdominal pain and had no gastrointestinal or genitourinary symptoms. She also denied any abnormal vaginal discharges or previous history of sexually transmitted diseases. Her cervical smears were up to date and had been consistently reported as “normal”. She had no past medical or surgical history but a strong family history of type 2 diabetes mellitus.

On examination, she appeared well and comfortable. Her abdomen was soft and non-tender. Speculum examination did not show any cervical abnormalities, however, on bimanual examination bilateral non-tender adnexal masses were found. A positive urine pregnancy was also detected.

A pelvic ultrasound demonstrated a bicornuate arcuate uterus and bilateral adnexal masses. The right adnexal mass measured 41x32x32mm and the left measured 72x59x64mm. Both masses were described as being echogenic, with no shadowing and no evidence of increased vascularity. The report suggested that the features exhibited were of bilateral ovarian mature teratomas (ovarian dermoids). Due to this, tumour markers, such as CA-125, were not performed. She was approximately 12 weeks pregnant at the time of the scan.

Throughout the pregnancy, pelvic ultrasounds were performed. These demonstrated an increase in the size of both adnexal masses. By 31 weeks of pregnancy the right ovary measured 140x110x65mm and the left ovary measured 77x52x55mm. No further ovarian changes were identified in subsequent ultrasounds up to the delivery date.

During the pregnancy the patient developed gestational diabetes mellitus that was poorly controlled resulting in a lower segment caesarean section being performed at 36 weeks of gestation. The preoperative plan was to perform a bilateral cystectomy at the time of the procedure.  This was based on the patient’s age, parity and the assumed benign nature of the ovarian masses.

Intraoperatively, a bicornuate arcuate uterus was identified with bilaterally enlarged ovaries (Figure 1). A bilateral cystectomy was performed without spillage of their contents, sparing the remaining ovarian tissue. Peritoneal washings were also taken for cytology based on the intraoperative findings of an unusual surface appearance of the right ovary (Figure 1). Following the operation, both cysts were bisected (Figure 2). The left cyst had typical dermoid features of sebaceous material and hair (Figure 3a). However, the right cyst had additional unusual features predominately of multiple mucinous cysts (Figure 3b).  Both cysts were sent for histopathology. The post-operative period was uneventful and she was discharged on day four. 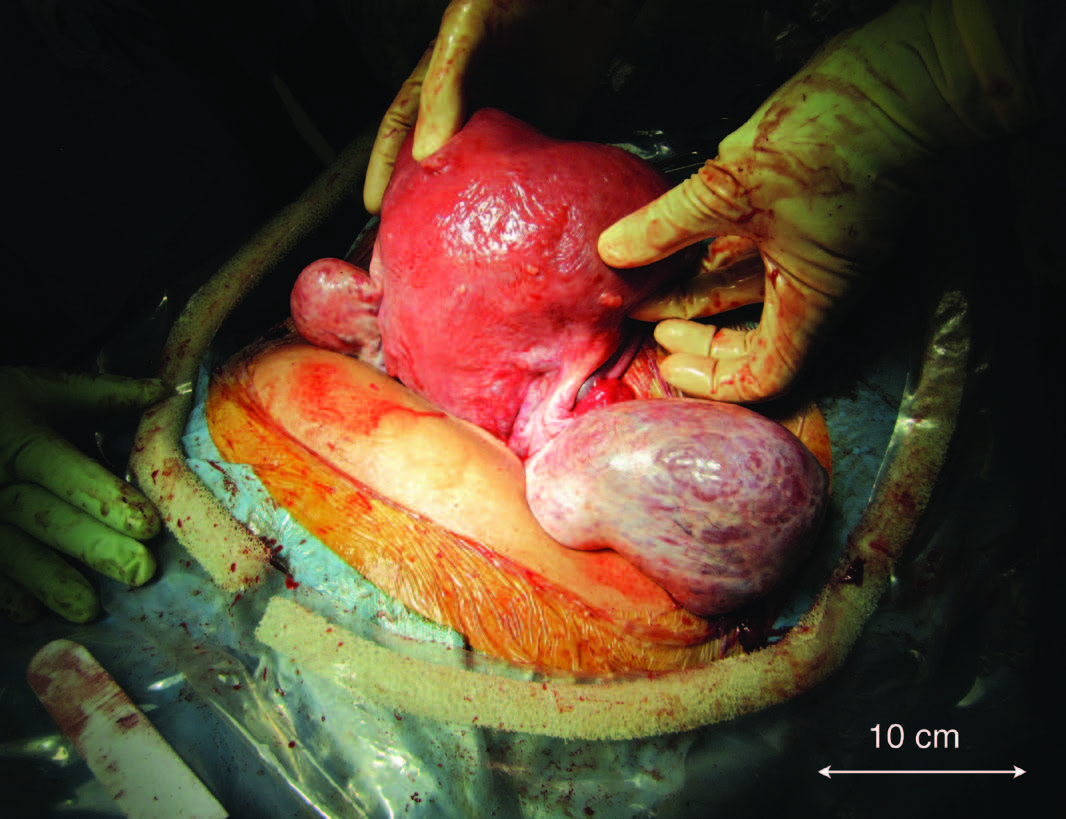 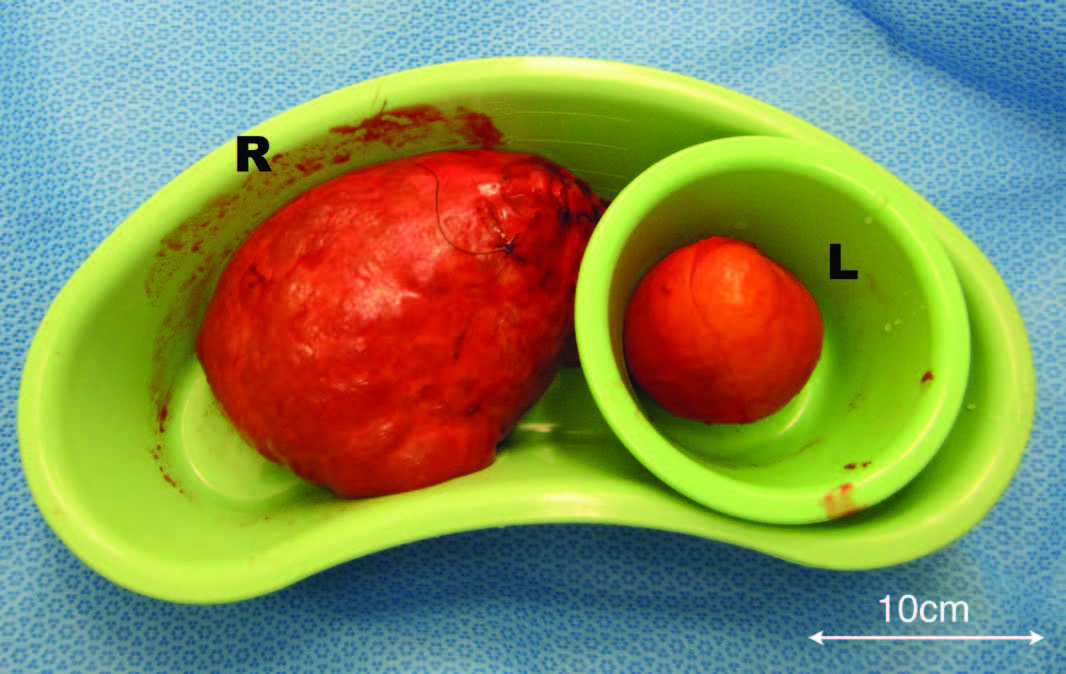 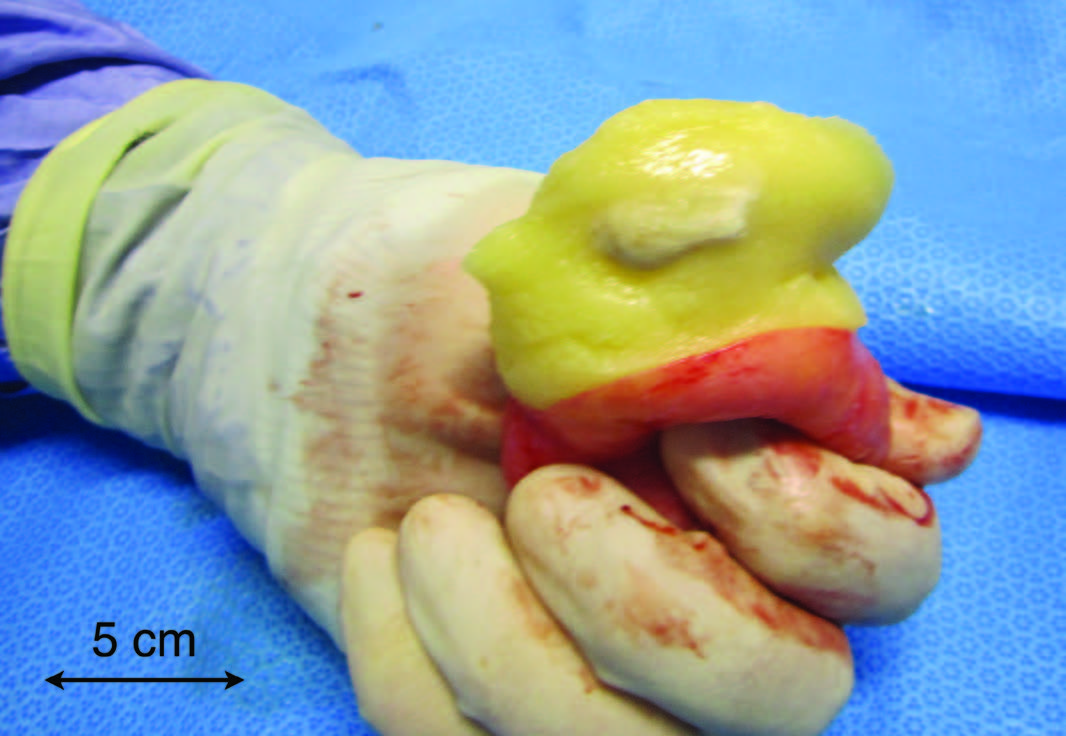 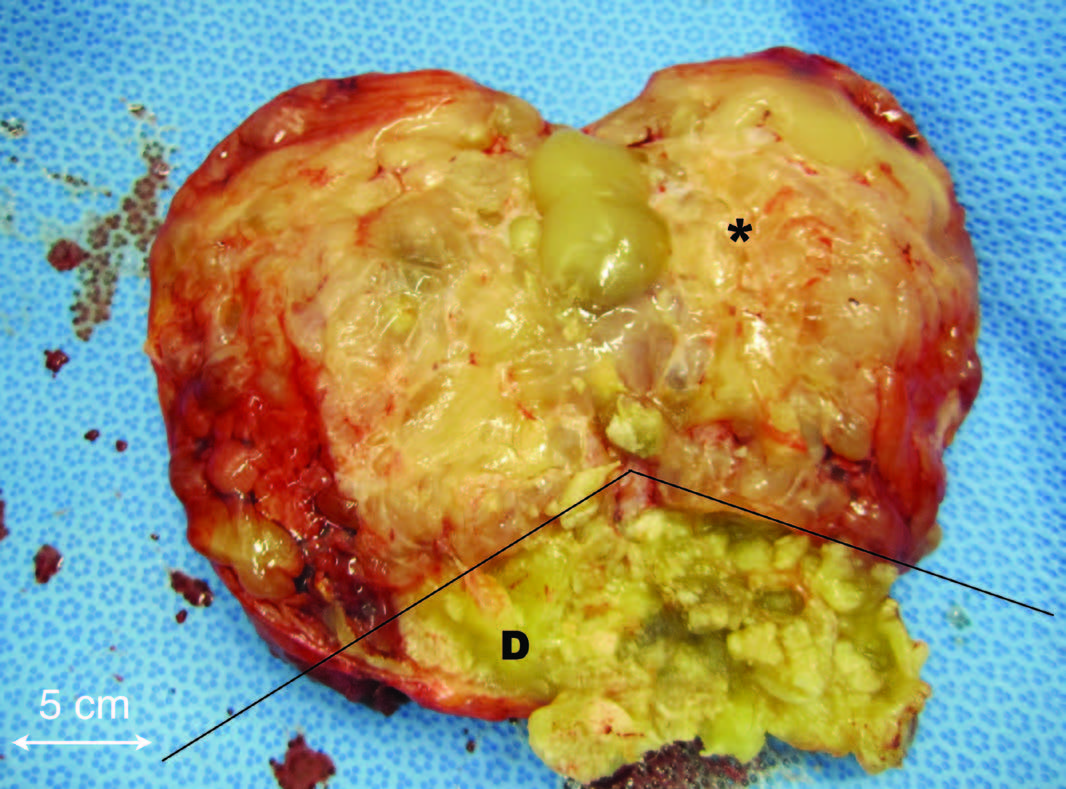 The histopathology report confirmed the left cyst to be a benign mature teratoma. However, the right cyst was reported as a mature teratoma together with a mucinous intestinal borderline tumour component. The peritoneal cytology did not reveal any evidence of malignant cells.

Adnexal masses are detected in approximately 1-4% of all pregnancies. [2,9,10,24]  In most cases, the adnexal mass is diagnosed incidentally on routine antenatal ultrasounds in an otherwise asymptomatic patient. [2,8-10] However, in some cases the patient can present with symptoms such as pain and/or signs of a palpable mass. [2] In this case study, the patient did not present with any abdominal pain; however on examination bilateral adnexal masses were palpable which were also confirmed on ultrasound scan.

The majority of adnexal masses are of ovarian origin, [2,9] however others may arise from extra-ovarian structures such as the fallopian tubes, uterus and non-gynaecological tissues (Table 1). Frequently encountered ovarian masses in pregnant women include: mature cystic teratomas, cystadenomas and functional cysts. [5,6] In most cases, the adnexal pathologies are unilateral. [3,5,7] In cases with bilateral masses, the most frequent diagnosis is ovarian cystic teratomas. [5] In this case study, the preoperative ultrasound reports suggested that the bilateral masses were also ovarian teratomas.

The management of adnexal masses detected during pregnancy is controversial. Both expectant and surgical approaches, each carrying specific risks and benefits, are possible. Factors including size, gestational age and sonographic appearance may influence the final management. [7,9]Ultrasonography is the imaging modality of choice for detecting adnexal masses in both pregnant and non-pregnant women. [4,11] However, ultrasonography has limitations and not all adnexal masses during pregnancy are detectable as the gravid uterus may obscure the visualisation and detection of such masses. [1,5] Although ultrasonography may assist in differentiating benign from malignant adnexal masses, [4,10,18,23] it is not useful in differentiating between benign and low malignant potential tumours preoperatively. [17] This was highlighted in this case report, whereby the right cyst was reported as showing features suggestive of a benign mature teratoma and therefore, a cystectomy was performed. Subsequent histological analysis provided a diagnosis of a borderline tumour, where a salpingo-oophorectomy may have been the procedure of choice.

Most adnexal masses detected during pregnancy will resolve spontaneously or significantly reduce in size without any interventions. [2,8-11,15] Furthermore, only 2-8% of adnexal masses are malignant. [7,22] Therefore most masses during pregnancy can be managed expectantly, [8,9,15] particularly if they are asymptomatic, less than 5-6cm in diameter, have a simple sonographic appearance and are diagnosed before 16 weeks of gestation. [8] However, serial observations and ultrasound scans throughout the pregnancy are recommended to monitor potential changes in these masses. [15] The masses may then be managed surgically at caesarean section or have repeat imaging performed 6-8 weeks post-partum in the case of vaginal deliveries. [15] However, some of the risks associated with this conservative approach include: torsion, cyst rupture, infection, obstructed labour or a delayed diagnosis of malignancy. [1,3,8,12,25-29]

By contrast, a surgical approach is indicated for those patients with adnexal masses during pregnancy that are symptomatic, greater than 5-6cm in diameter, have a complex sonographic appearance suggesting malignancy, or persist into the second trimester. [2,8] The ideal window for surgical intervention in pregnant women is in the early-mid second trimester, to reduce the risk of complications. [10,13] These complications include: spontaneous miscarriage, spontaneous rupture of the membranes, preterm labour, preterm birth and intrauterine growth restriction. [2,10,13,14] However, it is unknown whether these complications are due to the effect of surgery or anaesthesia. Although laparoscopy or laparotomy may be performed, particularly in the second trimester, laparoscopic surgery is considered more beneficial to the mother with few studies suggesting an effect on the developing fetus. [20,21]

The impact of adnexal masses on the developing fetus is largely affected by the natural history of the adnexal mass. Most adnexal masses within Table 1, in-and-of-themselves will not directly affect fetal development. However, iatrogenic surgical procedures, whether as prophylactic or reactive interventions, may result in miscarriage or premature labour. Rarely, is premature delivery indicated to deal with the adnexal mass. However, in the term pregnancy, a caesarean section may be possible at the same time.

Generally, corticosteroids and tocolytics are not administered prophylactically for surgical procedures dealing with adnexal masses in pregnancies greater than 24 weeks of gestation. They may, however, be indicated following surgery. [30]

For those adnexal masses that are detected incidentally during caesarean section, it is recommended that they be removed. [1,4] The recommended procedure is a cystectomy, whilst oophorectomy and salpingo-oophorectomy procedures may also be considered. [16] The rationale is to exclude the possibility of malignancy and to avoid the need for further surgical procedures following the caesarean section. [1,5,16]

In this case report, the adnexal masses were managed with an expectant approach, despite their increasing sizes and persistent nature throughout the pregnancy. A bilateral cystectomy was performed at caesarean section on the assumption that the masses were teratomas, which are predominately benign tumours. [19] However, the histological diagnosis differed and revealed a tumour with borderline malignant potential. A different management approach may have been taken if this was suspected during the pregnancy.

This case report demonstrates the diagnostic limitations of ultrasonography and the potential dependence on this modality in the management of adnexal masses in pregnancy.

Consent  to  publish  this  case  report  (including  photographs)  was obtained from the patient.

We would like to acknowledge the University of Wollongong’s Graduate School of Medicine for the opportunity to undertake a selective rotation in the Department of Obstetrics and at The Wollongong Hospital during medical school. In addition, we would like to thank The Wollongong Hospital library staff (Christine Monnie, Sharon Hay and Gnana Segar) for their excellent assistance with the literature search for this publication.